My first accidental encounter with Rosemary was several years ago through an eBay purchase wherein the seller described the doll as friend of Dawn, Dale.  In the auction images I recognized her dress as an authentic Dawn dress, but did not realize she was not Dale until she arrived with her ©Mattel Inc. 1970 head mark.  Her bendy arms and legs interested me as did her head sculpt which reminded me of a mini 1970s Christie.

It would be a while before I tracked down Rosemary's true identity as a Rock Flower.  After doing so, I added a never removed from box version to my collection.

The boxed doll has a copyright year of 1970.  She wears red sunglasses and a paisley print double-knit dress with hot pink fringed sleeves and handkerchief hemline.   Rosemary and the other dolls were sold with a posing stand and a 45 rpm record containing two "bubble gum" songs.  Their stands were designed to place over a short-spindled record player to allow them to "spin and twirl" while their records played. 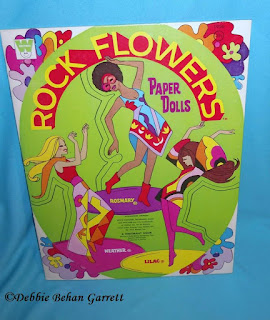 In addition to dolls and extra boxed fashions, a Whitman paper doll book (shown above) was licensed by Mattel, ©1972.  Rosemary seems to be the center of attention on the cover.

The three-dimensional dolls and their extra branded products were on the market from 1971-1974.