Rolling Rock Dolls makes a variety of doll clothing for dolls in various sizes. The above shown lavender romper, which was very well sewn, was made to fit 18-inch dolls. Made of a lightweight cotton fabric, the puff sleeves are elasticized as are the leg openings.  It closes in back with Velcro. 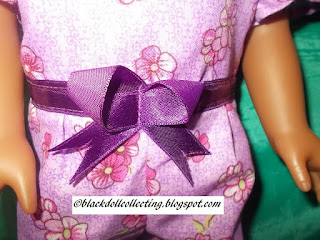 A contrasting ribbon with front-center bow accents the waist.

Three of my 18-inch dolls took turns modeling the romper as illustrated below: 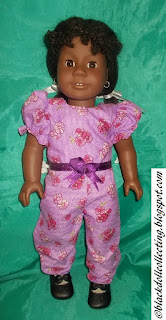 The fit is just right for American Girl Addy who modeled this cute romper from front... 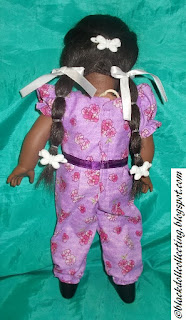 Doll clothing by Rolling Rock Dolls is available on Etsy as well as eBay.  Please browse their shops at your convenience to see if anything interests you.

Thank you for reading. Was this post helpful?
Follow my sister blog Ebony-Essence of Dolls in Black
View the Doll Events page for updates. Check out my eBay listings here.
Posted by Black Doll Enthusiast at 12:00 AM 2 comments:


After being lost in post office space for nearly two months, a package from fellow WLBDA member, Shawatha K., finally arrived on October 21, 2017.

On September 15th, by way of Facebook Messenger, Shawatha asked if I had received a package from her.  I had not.  Due to transposed numbers in the address, it took the post office nearly two months to figure out to whom the package belonged. 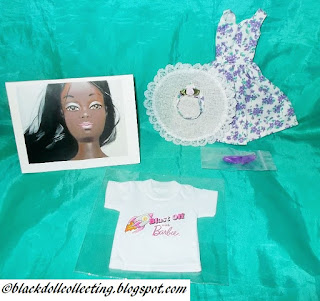 In addition to the note card, Shawatha sent a Barbie-size souvenir T-shirt from the 2017 Barbie convention with the convention's slogan:  "Blast Off with Barbie" on front.  A floral sundress, straw hat, and purple pumps were also in the package.


Princess of South Africa Barbie was chosen to model the fashion, which is perfect for her.  She took several photos from different angles, which all prove how very photogenic she is: 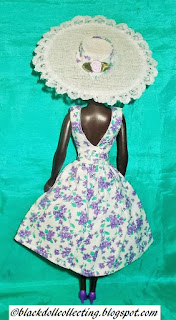 The inside of the note card from Shawatha reads:


Thanks for being the best doll club president in the world.
Shawatha Kendrick
8/28/17


Thank you so much, Shawatha, for this very nice gesture of your appreciation.  I appreciate you, as well as the other members of WLBDA! 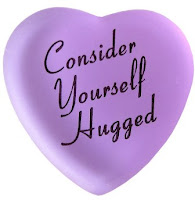 
Thank you for reading. Was this post helpful?
Follow my sister blog Ebony-Essence of Dolls in Black
View the Doll Events page for updates. Check out my eBay listings here.

Posted by Black Doll Enthusiast at 12:00 AM 8 comments:

After Addy's return from the American Girl Hospital, I shared that special plans for her hair were in store.  This was because her wig could not be replaced by the AG folks without replacing her entire head.  She had been hospitalized for replacement eyes, which was done without complication.

For her hair project, I purchased kanekalon braiding hair (shown above), which is the same texture as Addy's original wig.  I chose color #4, a close match to Addy's dark brown hair color.

The plan was to "somehow" attach the hair to only a portion of Addy's wig just to give it volume as the ends are "split" and quite thin.  Because I understand the principle of crochet braiding hair extensions (even though I do not own a latch hook crochet needle) my plan was to attempt this with Addy's hair.  (I watched a few Youtube videos to refresh my memory).


I knew I would have to braid at least one section of Addy's hair to which the kanekalon would be crocheted. 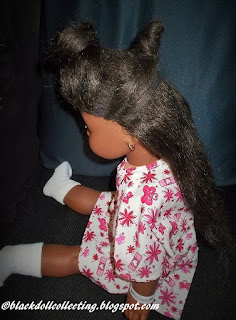 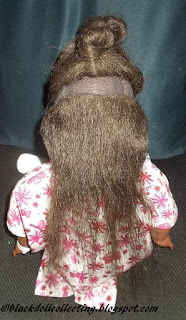 I initially separated Addy's hair into three sections.  The top two sections were clamped off as I would only be working with the lower section.  This section was braided into a horizontal cornrow from Addy's right to left (I thought I had a photo of this, but I must have deleted it!).  The tail of  the cornrow was left loose (a rubber band separates the loose ends from the final area of the cornrow braid--this will be illustrated later in this post).


As illustrated in the above two photos:  I straightened out the small end of a jumbo paper clip to create a handle for the opposite end, which would be the "hook" used to slide underneath Addy's cornrow to latch onto the braiding hair.


Addy and I both thought the weave would satisfy our desire for her to have fuller hair with healthy-looking ends.  Unfortunately, the crochet knots were not as tight as I desired.  This, I believe, can be  attributed to the looseness of the cornrow.  I was in a hurry with the trial run, wanting to see if I could actually make this happen.  As a result, the cornrow was hastily done.  So the next day, I removed the added kanekalon hair and also removed the cornrow.  (Because of the loose knots, it was a breeze to remove the kanekalon.  It was just a matter of loosening the knots more and pulling the tails away from the cornrow.)

I created a smaller cornrow (the original one contained two wefts of hair from Addy's original wig).  The new cornrow was created with only the bottom weft of hair.  Again, a rubber band was added to the end of the braided section with the rest left loose to blend in with the weave.

With the exception of using a smaller paper clip and smaller widths of kanekalon, the same steps were utilized to crochet the kanekalon onto the cornrow, as illustrated in the following five photos.


After crocheting the kanekalon onto the two new cornrows and combing the top of Addy's wig down over the weaved area, a small section of hair from the sides was brought to the back of Addy's head and held in place with a white barrette, as illustrated above.  This time, however, the side sections were twisted.

For the final touch, strands of hair clipped from a curly wig were used to make bangs for Addy as illustrated in the six pictures above.  A similar process was used to guide strands from a curly wig underneath the front section of Addy's own hair.  Once underneath Addy's hair, the center of each strand was folded over and the two loose ends twisted at the center to hold in place.  Because the hair is curly and will latch onto itself, knotting was not required.  All loose, straggly ends were trimmed. 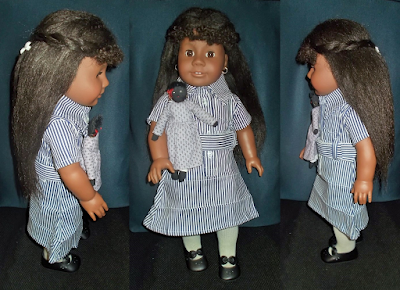 Tighter crocheted kanekalon onto two tighter cornrows created the fuller look that Addy and I both desired for her hair.  The bangs add to our overall satisfaction.

Addy's new weave is versatile.  When not wearing it loose, it can be styled in many different ways.  One such protective style is illustrated above.  She has two ponytails which are banded and adorned with a ribbon at the top and a barrette at the end.

After her arrival back home from the hospital, Addy remained in her hospital gown, in the return hospital-stay box, near my desk until her kanekalon weave and final protective style were completed.  She is happy to be back with Kaya and other friends.  They are just as happy (and so am I that this task has been accomplished).

Crochet Braid Video Tutorial
This is one of several video tutorials I viewed to refresh my memory on how to do this.  I did not use the exact technique she uses, but the video will give you a visual of the process.


dbg
Thank you for reading. Was this post helpful?
Follow my sister blog Ebony-Essence of Dolls in Black
View the Doll Events page for updates. Check out my eBay listings here.