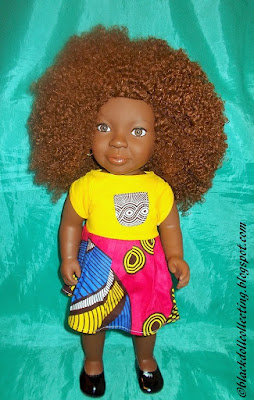 After finding shoes for 18-inch Mapalo, who arrived with bare feet, I set out to make a pair of socks for her.   The next series of photos with captions illustrate how the socks were made:

Shindana Toys, a Division of Operation Bootstrap, was founded in 1968 in the aftermath of the 1965 Watts, California riots.  The company's goal was to help rebuild the community and provide jobs for community residents.  Their moto, Learn, baby! Learn!  was in stark opposition to "Burn, baby! Burn!" which was chanted by the 1965 rioters as they burned buildings in their own community during a six-day protest against police brutality.

Shindana Toys was one of the many co-ops formed under the Division of Operation Bootstrap.  Their doll factory, located in Watts from 1968 through 1983, became a forerunner in the manufacture of ethnically correct dolls for Black children.  While most Shindana dolls were Black, their catalog of dolls includes a few that represent other ethnicities.

In addition to a host of other dolls by Shindana Toys, I have owned the above three different versions of Disco Wanda for over 20 years. In recent years, Disco Juanita, the Latina version of Disco Wanda, had been calling my name.  I was recently able to mark her off my want list with an eBay find. 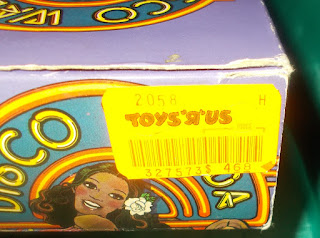 Having sold originally for $4.68, the original Toys R Us (TRU) sticker price remains on the top flap. 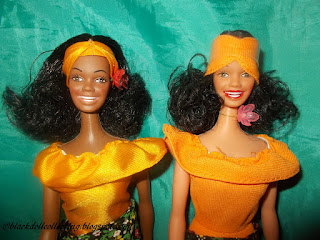 Both dolls have painted brown eyes, smiling mouths with upper and lower teeth and the hint of a tongue. Their lip color differs and complements their complexions.  Both have shoulder-length, black hair, which is rooted and styled in a flip.  Wanda has an orange flower that pierces her left temple. Juanita wears a pink flower choker. 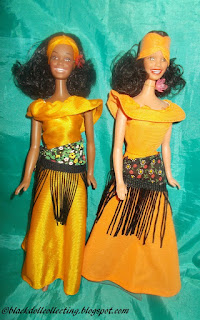 Made of polyester, Wanda's dress is gold; Juanita's is orange.  They both wear headbands made from the same material as their dresses and each wears a black floral waist sash with black fringe.  Both dolls arrived with bare feet. 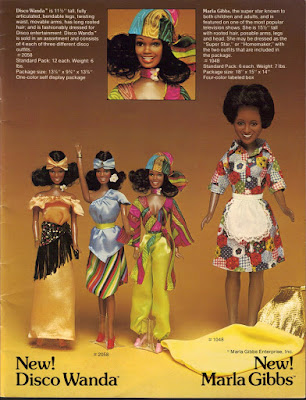 Three different versions of Disco Wanda appear in Shindana's 1978 catalog without the mention of Juanita.  This leads me to believe Juanita was introduced at least a year later.  While the catalog indicates Wanda is "fully articulated," the articulation extends only to the usual five areas plus a swivel waist and bendable knees.


Included in the Disco Wanda-labeled box was a clear plastic doll stand.   Upon removing the inner box lining, a TRU sales receipt fell out, which shows the original retail price of $4.68.  That price and the TRU stock number match the TRU box sticker price and stock number. 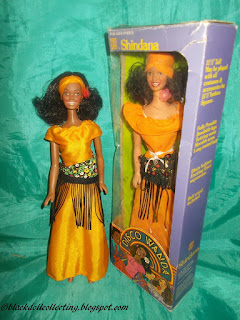 The bottom flap of the box contains stock numbers for Wanda and Juanita (#2058 and #2450, respectively). It is unknown if Shindana used the same box for both dolls, or if Disco Juanita had her own box that contained her name and image where Wanda's name and image appear.  For now, Juanita owns the box that was included in the auction.  The newest Wanda will be displayed with similar dolls.

For more information about Shindana Toys and the Watts Riots navigate to the following links:
The Shindana Story (additional links are included at the end of this post).
Shindana Toys (a Wikipedia entry)
Watts Riots
Watts Riots

Norah Wellings began making dolls in 1919 as the chief doll designer for Chad Valley Dolls of England.  She formed her own company in 1926 (Victoria Toy Works) where she continued making dolls along the style of Chad Valley dolls, made of cloth (velvet, velveteen, plush, and felt) with mask faces or molded faces underneath.  Many of her dolls were sold as souvenirs for the tourist industry.  Her dolls were also sold on cruise ships.

I acquired my first Norah Wellings doll during the late 1990s/early 2000s from a local antiques dealer.  It is a 14-inch doll made of stuffed velvet with molded facial features, glass eyes, smiling mouth, and painted teeth.  This circa 1930s doll represents a native islander and wears only a wheat-colored and orange grass skirt and one orange arm bracelet.  The doll's left leg has orange and wheat-colored grass tied around the calf.  There is a dark area in the same location on the right leg where the same material had been tied around that leg.

Some of the black mohair used for her hair is missing from the crown of her head.   I had great intentions of replacing the missing hair but never did.  Instead, I made her a headscarf using a piece of a brown and gold cotton scarf.

I have always wanted at least one additional Norah Wellings doll to upgrade the first one shown in the above photos.  That opportunity presented itself with the eBay purchase of my most recent Norah Wellings doll.  (Thanks again DS for sharing the link.)


Except for the usual cheek and nose rubs to the velvet, the newest-to-me Norah Wellings doll is in excellent condition.  She still has all her original jewelry and has both her original black cloth tags.

The tag sewn to the right side of her neck reads, "Nassau."  Her right foot tag reads:  Made in England by Norah Wellings.  Her sewn-on gold dress, made of velvet, has two felt orange circles on the front of the skirt and two on the back of the skirt.  Her short curly brown hair almost matches her complexion.  This circa 1930s doll was probably sold as a souvenir doll in Nassau, Bahamas.

dbg
Follow my sister blog Ebony-Essence of Dolls in Black
Check out my eBay listings here.


Ken bodies are now described as broad, slim, and original.  Distressed Denim, as noted in the above caption, has a broad body.  Classic Cool appears to be on the original Ken body.

Here's a link to an article published on Yahoo! Style on June 20, 2017, about the new Kens with "dad bods" and "man buns."  Photos of the guys and gals in the new line are included in the article along with a video from the dolls' debut on Good Morning America yesterday.  Here also is a direct link to the GMA video.

Here is yet another link to a cute stop-motion video.

Ten of the 15 new dolls were supposedly available in stores yesterday.  Preordering is now available at ShopMattel.com where, for a limited time, free shipping is offered on all Fashionistas.

Glam Boho can be preordered at ShopMattel for $14.99.  Most of the others are $9.99.  All have non-articulated bodies, but I wonder if Glam Boho's complexion is comparable to The Barbie Look (TBL) doll's skin tone.  Maybe she can borrow TBL doll's body and enjoy a little more movement.


dbg
Follow my sister blog Ebony-Essence of Dolls in Black
Check out my eBay listings here.


I was so excited about this doll that I ordered two. Both arrived this past Friday. The plan was to debox one and to keep the other in the box indefinitely. Unfortunately, I am returning the one I deboxed first because she has a dark smudge on the side of her face. I did not see this imperfection until I had taken several photographs, which are the first ones shown below.   Please examine your dolls for unsightly imperfections.

Complexion Comparisons
I continued using the imperfect doll to photograph with other dolls from my collection to compare complexions.  The Barbie Look Barbie is not a perfect match as a body donor for any of my dolls, but is a closer match to one than the others.  For the comparison Doll #1 put on temporary clothing.

Doll #2
I examined Doll #2's face closely and was pleased to find there were no dark smudges or other imperfections.

dbg
Follow my sister blog Ebony-Essence of Dolls in Black
Check out my eBay listings here.