This Just In: Ava Duvernay Doll 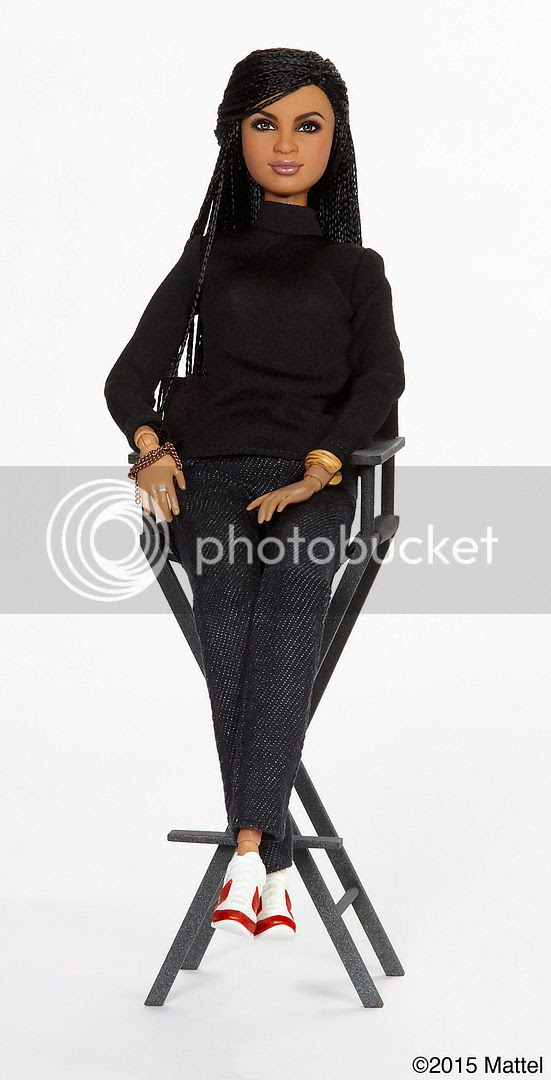 Several websites have reported Mattel's creation of a Barbie in the likeness of Selma director, Ava Duvernay.

The doll has braids, not locs, like Ms. Duvernay; and unfortunately production is limited to one as in one-of-a-kind.

Big Beautiful Dena Arrived In Need of Clothes and Shoes 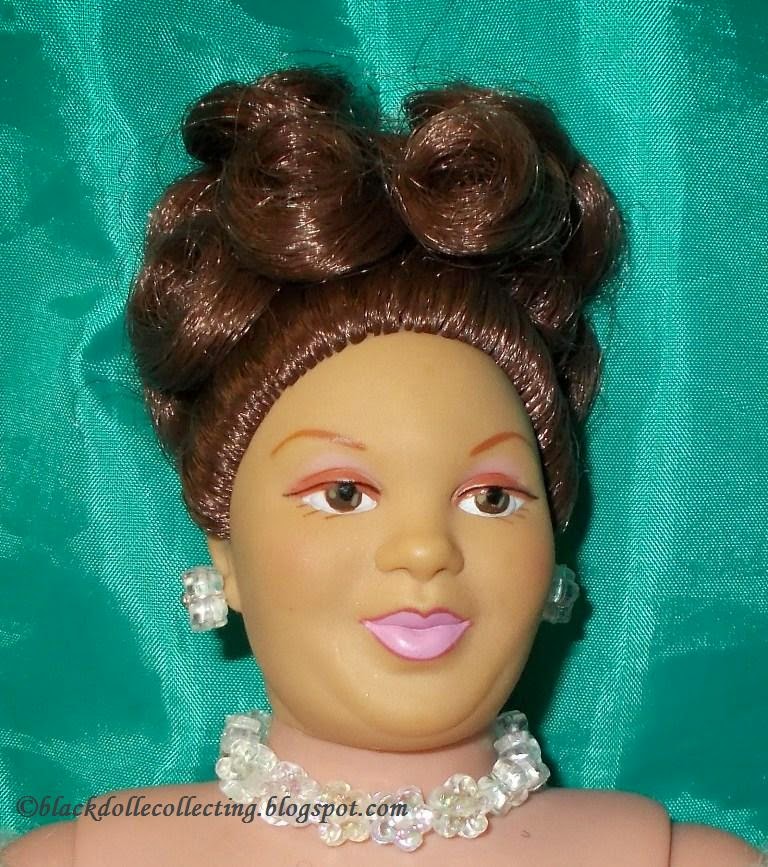 Big Beautiful Dolls, Dena arrived nude as one of the last available dolls from Georgette Taylor.  "We"  immediately rummaged through available clothing to locate something suitable for her to wear.  A pair of shoes ordered after her arrival and after the first photos were taken were modeled last.  Below are the photos of the clothing and what she ultimately chose to wear.

I will have to purchase more toddler-size crew socks and make more of these dresses for Dena, using sharp scissors for cutting.

If you too are in need of fashions for any of the Big Beautiful Dolls (Dasia, Dena, or Dawn), check out Vanessa's Etsy Shop for items she plans to stock that were written about here.

I purchased Dena's shoes on eBay.


Walmart had restocked the Sparkle Girlz fashions the last time I visited.  I thumbed through the two display boxes and chose the fashions shown above and the ones shown below.


New to me, I wanted I.T.BE. (Integrity Toys Basic Edition) Luscious because of her head sculpt and natural textured hair.  The body (as described in my doll inventory workbook) is jointed at the waist only with arms permanently bent at  the elbows.  The doll retailed for $25 in 2012, which is what I paid after the seller kindly offered a $5 refund for a minor imperfection that I discovered upon her arrival.

After piercing her ears and adding dangle earrings, I removed the rubber band that held the hair in the up-do and gave her a few strands of side-swept bangs.  The loose ends were stretched down and around to create the look shown below:


I have no plans to rebody her for now, but that is a possibility for the future. 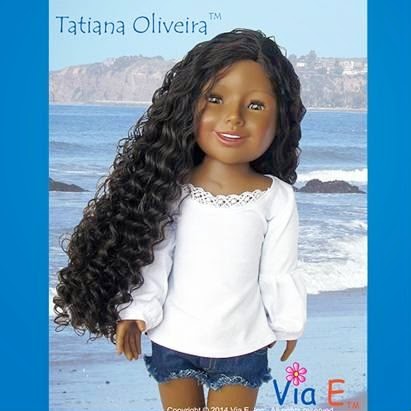 Tatiana Nayara Oliviera (one of the 19-inch, vinyl Dollfriends by Via E) was first seen on this blog here in a guest post by her creator, Ellen Callen.  Ellen shared the above photo that illustrates the brown curly hair that will be used on Tatiana.  She also shared the following advanced ordering information: 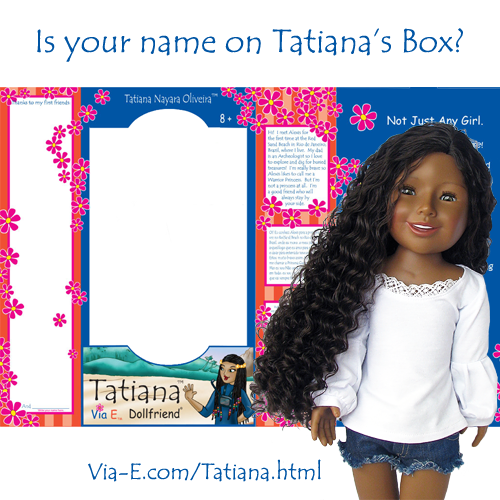 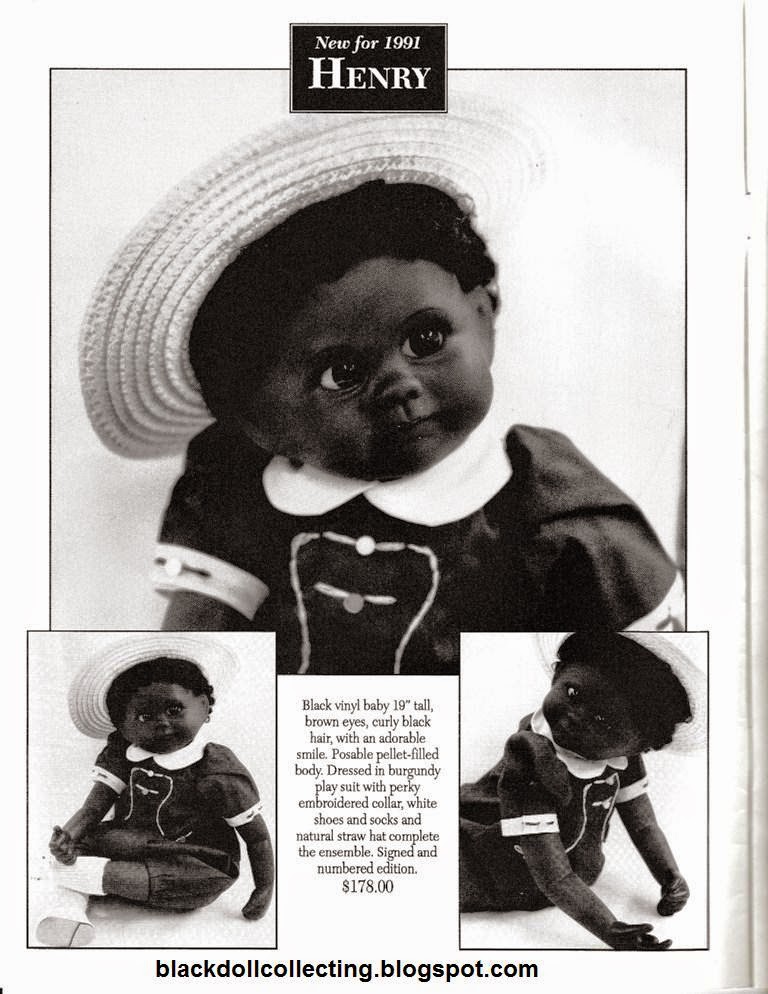 Even though I find myself often saying I no longer "collect" babies (with reference to dolls), on a rare occasion I find one that warms my heart enough to purchase.  Such is the case with Henry by Kathy Hippensteel.  As shown on a scan from a 1991 Truly Many Joys catalog above, TMJ was the distributor of Hippensteel's dolls in the 1990s.


New for 1991, Henry, as the catalog describes, is a 19-inch vinyl doll with pellet-filled, posable body.    My doll arrived two weeks ago dressed in his original burgundy romper, white socks, and white shoes, minus his straw hat.  Even though it was apparent in his auction photos that his eyes and nostrils were crusty and his seller indicated he needed gentle cleansing, there was something about his facial expression that begged me to bring him "home."  So I did, for a winning bid of $19.99 and shipping of $11 and change, a far cry from his original retail price of $178.00. 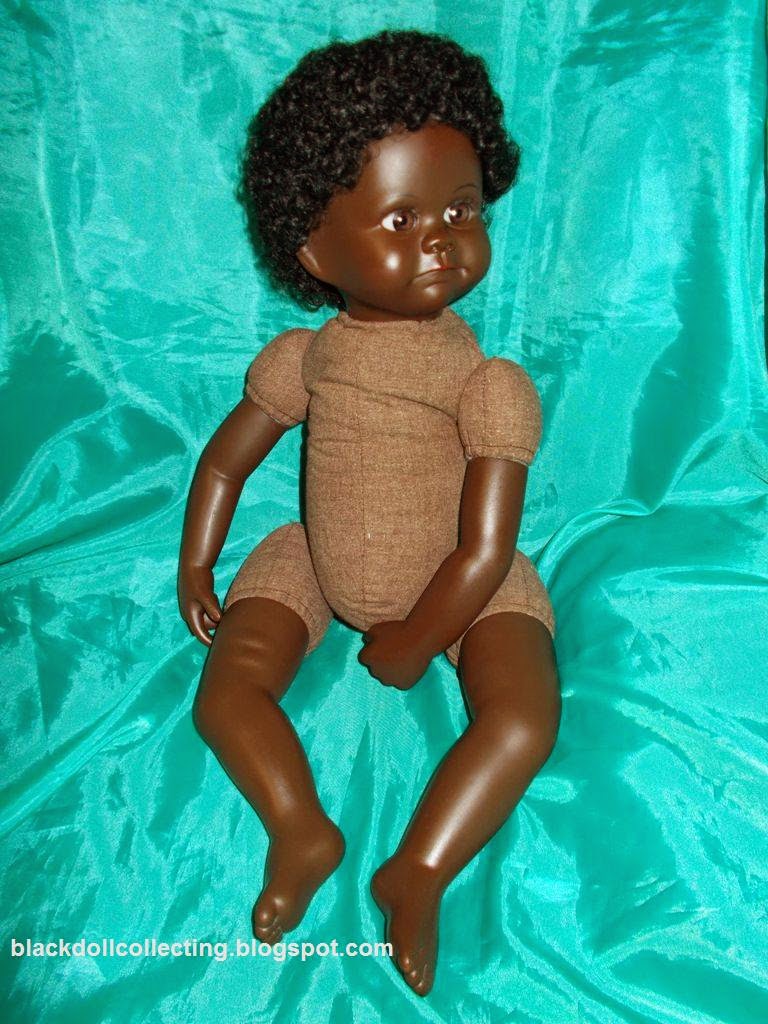 Over two decades before Henry arrived, based on an image in a doll advertisement, I purchased my first Hippensteel doll.  Her name is Wheatsie.  Unfortunately, I was never able to bond with the doll.  Even after separating her tightly coiled synthetic curls and piercing her ears, the 15-inch Wheatsie never really appealed to me for a combination of reasons.  The deer-in-headlights stare with eyes that seem too large for her face and a vinyl foot that kept falling off her cloth leg due to the poor construct are a few reasons I never liked the doll. Even with the foot repaired, I always regretted this purchase. 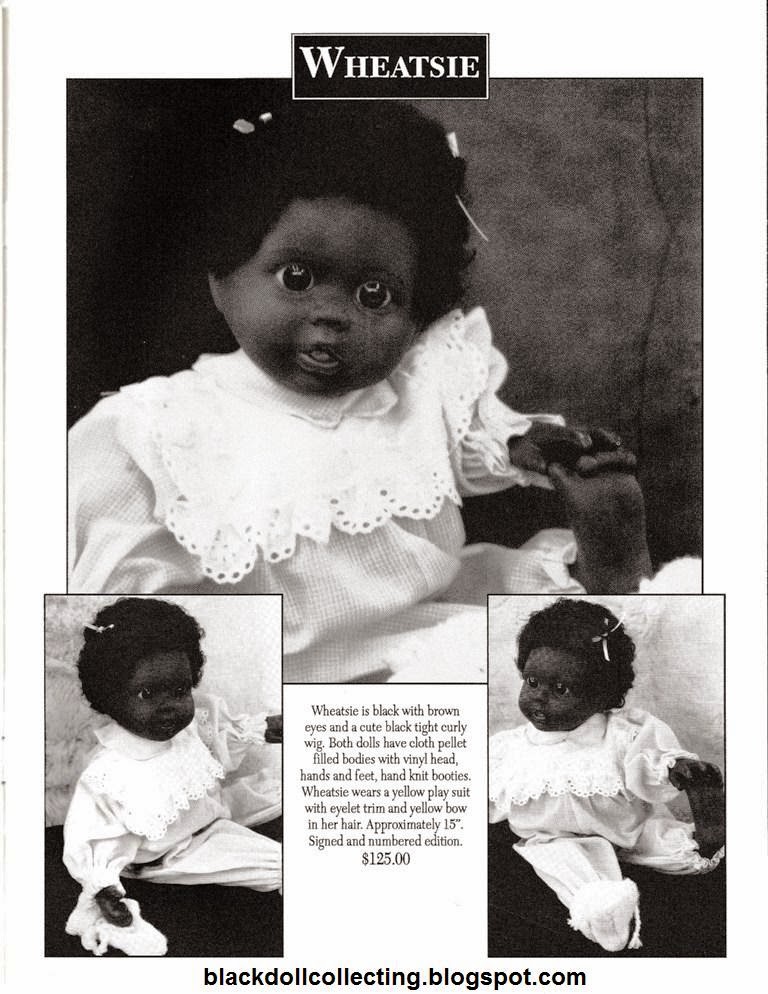 Wheatsie was available in two complexions, a medium brown and dark brown.  The medium brown version was not offered at the time I purchased my doll at retail price. 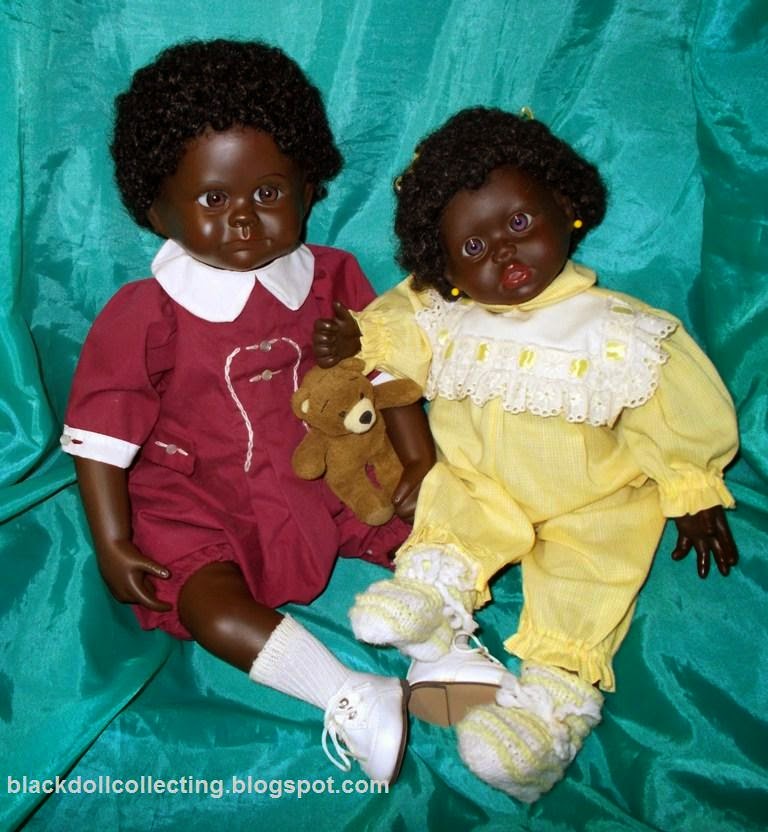 After Henry received his bath, was redressed, and given a plush companion, Wheatsie joined him.  In love with Henry, I wondered if there was anything else I could do to help me like his sister.

In cuteness factor, Henry runs circles around Wheatsie's dull expression.  "She needs eyelashes," I thought.  So I gave her some using the end portions of false eyelashes I had available (purchased for dolls... not for myself!).

She looks a little better, but I still find Henry more appealing.

I Did It! I Re-Bodied a Blythe! 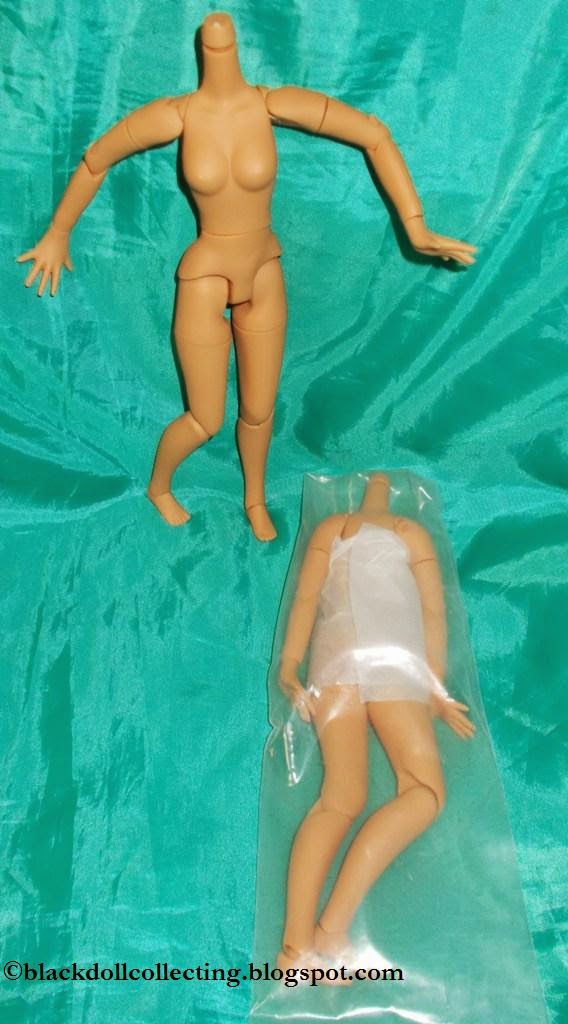 With free time on my hands, I watched a couple of YouTube videos about opening Blythe doll heads to get an idea of what I needed to do to successfully rebody my dolls.

I found this video the most helpful and chose to rebody the doll with the fishtail braid first.

The video suggested clamping the spring with hemostats or grasping with tweezers to lift it away from the plastic bar.  I used tweezers.  It took several tries before I was able to lift it off.  I had already unscrewed the screws before removing the spring.

Next, I opened up a jumbo paper clip, leaving a hook on one end.  This would be used next to guide the spring back onto the plastic bar before closing the two head panels, as shown next.

Lots of posing followed by trying on clothes took place next.


Afro Blythe will receive her new body as soon as time and frame of mind permit.

dbg
Posted by Black Doll Enthusiast at 12:00 AM

Black dolls are my passion, my drug of choice. They renew my spirit!
Newer Posts Older Posts Home
Subscribe to: Posts (Atom)