Yet another doll project has been completed of the many I have to do.  This one involved rebodying my Afro Blythe. Her sister, with the fishtail hairdo, was rebodied first, even though she arrived after Afro Blythe.  I chose to rebody the other doll first because the Afro one is my favorite; and if I flubbed up, I did not want it to be on my favorite of the two.

I used the same steps to rebody Afro Blythe that were used on the other doll.  What was done is illustrated in the captioned photos below.


Ashanti Keisha arrived with bare feet.  My written plan upon introducing her here was to make replacement sandals.  That task has been completed and is outlined below.


Because all pieces are flat, these sandals required less time to make than the white Roman-style sandals seen in an earlier post.

Before deciding to use corrugated cardboard for the soles of Keisha's sandals, Husband and I shopped at Walmart to locate just a small square of cork. He wanted to know why I needed it; so I shared my plan to make these sandals.  Walmart had cork in stock in a multipack, more than I needed and more than I wanted to pay.

With Keisha wearing her new sandals, I took her into Husband's, man cave to show him my handiwork.  Based on his initial sigh and the expression on his face, I knew he thought I needed him to repair her.  Then he saw the sandals and said. "Oh, the sandals.  You're getting pretty good at this, with a design on top and all."

I smiled.  Then Keisha and I went back to our cubbyhole on the opposite end of the house.

Part of The Ultimate Collection by the late Philip Heath, 1999, Angelica's original fashion is an off-white satin sundress and voile duster with white leggings. I originally added nude hose and off-white ankle strap shoes after her barefoot arrival. A girl needs shoes, I thought. I suppose Heath thought differently.

Her first shoes deteriorated with time as blogged about here and were replaced with the black stud-accented sandals shown above, which (without soliciting her opinion) my daughter advised, do not match her original fashion.  I already knew this, but these and a couple of other shoes were the only ones I found while shopping for replacement shoes for her size 7 child's foot. So they had to do.

I have longed to redress Angelica for years. This, I knew, would pose difficulty because of her partial vinyl limbs, her 38-inch height, and slender body. The new outfit would require long sleeves and new leggings or a dress length that would extend below her knees. During Zulily.com's recent Dollie and Me event, I found two fashions that are perfect for Angelica. I guessed at her size, girls 4/5.

Even though they were ordered together, the fashions were shipped separately with the one on the left in the above image arriving first.  Angelica tried it on and wore it for about a week before the dress arrived.  She models both below with and without the dolls chosen to wear the accompanying dresses:


For the second outfit, a turquoise dress with mesh skirt and dark pink underskirt, Angelica had a couple of on-hand shoe choices, shown next.

Initially I chose the first outfit as my favorite, but with the black shoes, I like the dress equally as well.  Angelica "decided" to wear the first outfit for now because of its summery look.  She will save the dress to wear during the fall or winter.  The little ones were just happy to be redressed.

Before Mia leaves to reside in her permanent home with my soon-to-be 10-year-old niece, she complied with a photo shoot to be shared here.  The text from the back of the box describes her story:

MEET MIA!
Mia has stepped off the pages of the best selling picture book, "I'm a Pretty Little Black Girl!", which was nominated for an NAACP Image Award.

Mia loves how she looks and celebrates herself in everything she does.  As the first doll created from a modern picture book written specifically for little black girls, tenacious Mia will bring joy and hours of imaginative play to any little girl.


The author of I'm a Pretty Little Black Girl!, Betty K. Bynum, partnered with the Madame Alexander doll company to bring the character, Mia, to life.  It is refreshing to see Mia's new head sculpt which has not been used for other Alexander dolls.  Mia's lovely thick rooted hair can be combed and styled in the several ways illustrated on the following Internet-captured promotional photo that enticed this purchase. 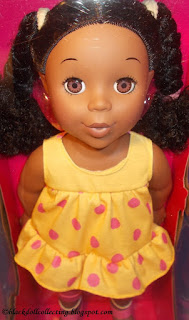 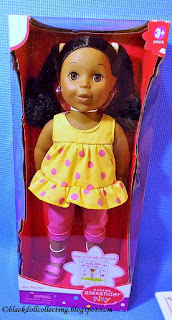 The separately sold, hard copy book, I'm a Pretty Little Black Girl!, has received an average of 4.9 out of 5 stars on Amazon.com.  Of course I had to purchase a copy for my niece, who enjoys reading as much as she loves dolls.  The fact that she enjoys both pleases me.

A visit to the author's website, provides additional details about the I'm a Girl Collection, which includes apparel and the following other titles:

At the time of this post, Mia is the only character that has come to life in three-dimensional doll form. Perhaps the others will follow.

Addendum
Get added to their email list and get a code for 20% off your next Madame Alexander.com here.
Buy Mia here.

Posted by Black Doll Enthusiast at 8:37 AM

One Pair of Sandals Led to Another 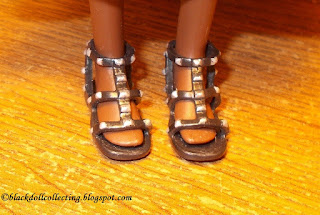 Have you ever purchased a doll solely because of an accessory?  I rarely do, but I did this past weekend.  I had to have the black sandals that Barbie Style Glam Vacation Barbie (a.k.a. Resort Barbie) wears, so I took the plunge.

Goddess loves them and immediately tried on several fashions, including the extra pink blouse with waist tie and denim shorts that came with the Glam Vacation doll.  Photos of the fashions she tried on are shown below:

So... I made a pair using white foam and other materials. 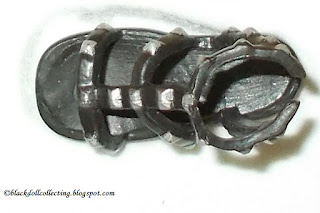 To create a pattern for the sandals, I traced the sole of the black sandal onto a piece of white foam (twice), cut these patterns out, flipped them over (to use for the other foot), traced them again, and cut out the second set.   The result was a total of four pieces of foam, two for each sandal.

I sewed the ends of each of the two 1-2/8 inch elastic cords together to create the straps for the toe of the sandals (two for each sandal).  These were looped around the top foam.   The straps of each ankle/calf strap was centered and positioned underneath the back of the top foam before the bottom foam was placed underneath.  I tacked these two pieces of foam in place with a couple of stitches near the toe and a couple near the back, then I filled in the space between the layers of foam with glue.  I placed a small weight on top of each to hold the pieces of foam in place while they dried overnight, making sure that the pieces did not shift underneath the weight of the foam.

I have the black sandals* I wanted and now Goddess has the white sandals she desired. 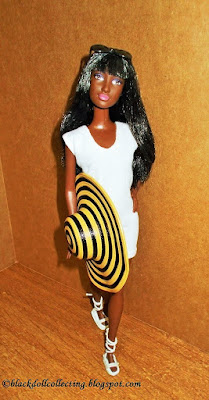 The black sandals fall off easily.  I lost one during the process of trying on the various fashions.  It took several minutes of crawling and feeling around on the floor for me to find it!   (The things we do during doll play!)

Watch a sandal-making video by Limbé Dolls here.  Her technique differs from mine.  It can be a helpful visual if you desire to make similar sandals.  She has several shoe tutorials at the link.


In my previous post on these two Fashion Corner divas, I indicated my plans to rebody both due to their injured extremities. One had a broken leg, the other a broken arm. The rebodying plan has changed, possibly temporarily, but maybe permanently (none of my on-hand dolls' complexions match theirs).

As a plan B, I decided to mend their amputated extremities using air dry modeling clay and glue. I was hoping the modeling clay alone would work. However, it did not.

Black dolls are my passion, my drug of choice. They renew my spirit!
Newer Posts Older Posts Home
Subscribe to: Posts (Atom)