Janet left Texas in late March and has thus far visited three separate Maryland (MD) cities with one more MD city to visit before heading to the southwest.  The three MD hosts have afforded Janet with fascinating experiences and have shared copious photos, a selection from which I am allow to share.

Her first Maryland stop was with Julia B. who gave her a grand time.  Janet visited many historical sites and took many delightful photos.  Highlights of her first day with Julia B include going to work with her, a visit to the library, and a downtown visit to Bill's Music store, which Julia has fond memories of visiting with her dad.  I enjoyed the following photo where Janet prepared for bed the first evening at Julia B.'s home.


Other highlights of Janet's visit with Julia B. include salsa dancing...

...a return trip to the library to read about historical people from Maryland...
...a later visit to the Benjamin Banneker Historical Park, and... 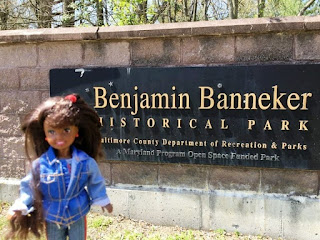 ...attendance at the Maryland Society of Doll Collections Luncheon where Janet met a host of other doll collectors.

Janet had so much fun and she learned so much about Maryland while with Julia B.   Little did she know that she was in for more fun and learning with her next hosts.

Because MD is so close to the nation's capital, while with her next host, Alisa W., Janet had an opportunity to visit several iconic national landmarks.  She and Alisa took the Metro/subway to Washington D.C. for a fun, yet educational sightseeing trip.  It was raining during the trip, so Janet wore her rain gear.

While sightseeing in D.C., Janet visited/saw:  The National Museum of African American History and Culture (which is not scheduled to open until September 2016), the Washington Monument, the Department of Agriculture, the National World War II Memorial, and the Tidal Basin Reservoir off the Potomac River where from a distance she could see the Jefferson Memorial.  Photos of some of these historical sites follow:

One of the highlights of Janet's Washington D. C. sightseeing with Alisa W. was her visit to the Martin Luther King, Jr. National Memorial located in downtown D.C.  See the next three photos:


Before traveling to her next Maryland host, Alisa threw a fabulous pizza party for Janet and some of the friends she met while visiting.  Based on the following video, they had a blast!!!  (In the video Janet wears a light blue floral print top and white lace socks.)  Click the play arrow to view.

Janet's current Maryland host is Cheryl B., where she will remain until later in June. 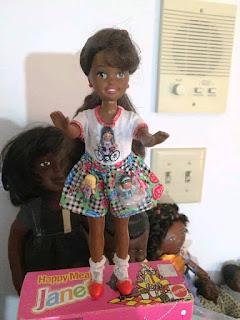 After being greeted by some of Cheryl's dolls, Janet took a field trip with second graders where they visited the National Air and Space Museum in downtown Washington, D.C.


As shown in the above two photos, Janet took photos at the Tuskegee Airmen and Bessie Coleman displays.

She marveled at the aviation and space artifacts she saw at the National Air and Space Museum. Later during the same week, she visited the Kennedy Center with fourth graders for a concert. Unfortunately, Cheryl was not able to take very many photos at the Kennedy Center since photos were not allowed in the concert hall.  She did manage to take the following two photos to document Janet's Kennedy Center trip:

More is in store for Janet while she is under Cheryl's watchful eye.  Additional updates will follow.

Thank you ladies for being such great hosts to our 2016 WLBDA Travel Doll, Polly Pockets Janet. She is one lucky little girl!

dbg
Check out my eBay listings here.
Posted by Black Doll Enthusiast at 12:00 AM 14 comments:

Doll Gifts from Family and Friends

Except for two dolls, the dolls, doll clothes, and figurine shown in this post were received as birthday gifts from family and friends.

The wonderful doll gifts, fashions, and figurine from loving friends and family will provide me with an extended doll fix for a while.  I will soon debox most and fully enjoy them.  Thank you Son, Betty A. and Debra R.  I truly appreciate your thoughtfulness.

2016 Barbie for President and Vice President


I just found out about the You Can Be Anything Barbie for President varieties of two-doll sets (thanks Susan!).  Each set includes Barbie (for president) and her vice president running mate.  This is the first time Mattel has created a Barbie Vice President.

Dolls are currently available on Amazon.  I have no plans to add a set to my collection; but if I did, it would be the set shown above and below (the same dolls out of box).  Had Mattel used a different head sculpt for Barbie, I might have purchased without hesitation.  The overused Desiree/Nicky head sculpt does not interest me.  (But I guess I could always buy and redressed another Barbie as President... just a thought.)

The end of the following YouTube video provides additional information about the sets.


Here is the buy link at Amazon . com (proceed at your own risk if you prefer undamaged boxes.)  At the time of this post, I could not locate buy links from other merchants.

Posted by Black Doll Enthusiast at 9:08 AM 13 comments:

Email ThisBlogThis!Share to TwitterShare to FacebookShare to Pinterest
Labels: 2016 Barbie for President and Vice President

The Making of a One and Only Toddler

After visiting Karen Oyekanmi's Facebook (FB) page, I fell in love with one of the dolls in her cover image. The doll was not clearly visible, but her complexion and mounds of curly dark hair caught my eye and I needed to know more about her.  The 18-inch felt doll had been made quite some time ago and had since been sold, Karen explained.


After purchasing a bookmark from Karen in March, with her FB cover-page doll still on my mind, I asked Karen if she could make a smaller similar doll, around 12 inches, with the same complexion and lots of curly hair. The doll was to be my birthday present from me to me.   Karen agreed and asked me how I would like for the doll to be dressed.  I sent the two following photos of a dress my daughter wore at around age 4 and asked if she could make the doll a similar dress. 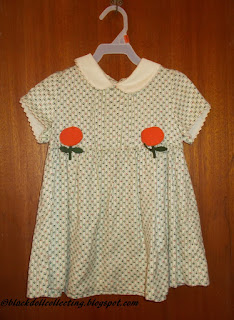 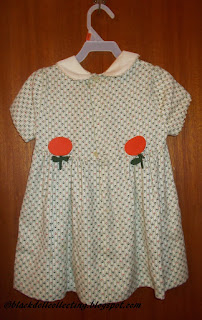 These front and back views of the dress my daughter wore circa 1980/1981 illustrate the orange appliqués at the empire waist through which the now missing green satin ribbons that tied on either side had been laced.  The ribbons are visible in the above photo of my daughter wearing this dress.

Karen began making my doll in early April and shared photos of the doll-making process through which I enjoyed seeing my commissioned toddler come to life.  Some of Karen's photos follow:

After I viewed the first photos of the completed doll, I asked Karen if she could possibly make a doll for her.  She already had the perfect 3-inch doll, which the toddler holds in the above image.

To better illustrate her detail, upon arrival, I took the following additional photos of my birthday doll from me to me. 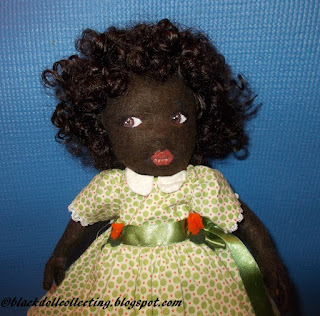 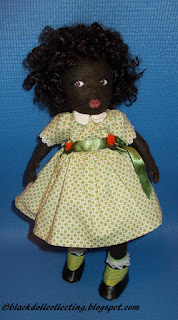 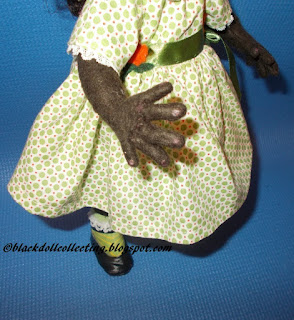 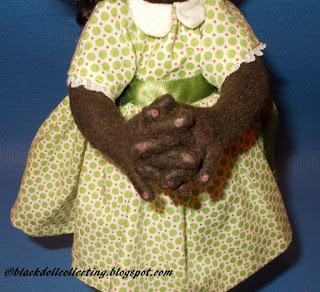 Her separate fingers allow her to clasp them together, and her body construct allows her to stand without the assistance of a doll stand. 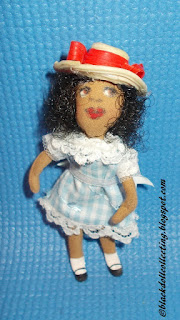 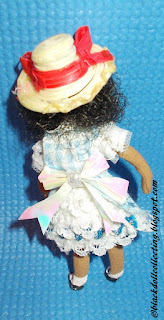 Isn't her little doll adorable?  No detail was spared on this one either.  Made of cloth, she has wired arms and legs.  She wears a fancy straw hat of polymer clay, a blue and white gingham dress and has painted-on white socks and black Mary Jane-style shoes.  Her little dress has ruffles in back and a large bow.  Too cute! 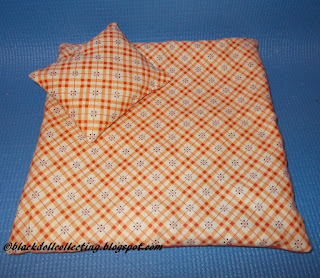 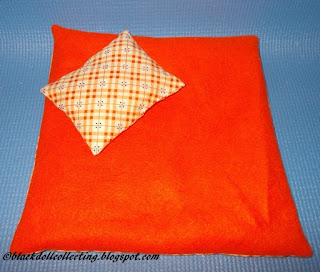 Added surprise extras were a blanket and pillow made by Karen that were sent along with the Toddler Baby and her doll.  One side of the blanket is cotton blend print of orange, peach and white (I love peach!); the back is made of orange felt. 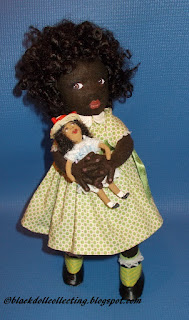 Here she is, the one and only 13-inch Toddler Baby and her one and only 3-inch doll.  Have I written how much I love them both?

dbg
Check out my eBay listings here.
Posted by Black Doll Enthusiast at 12:00 AM 18 comments: