My Scene Madison and Westley Experience

When Mattel's My Scene dolls were released in 2003, I purchased Madison #1 (box date 2002) and included her descriptive information in chapter 3 of The Definitive Guide to Collecting Black Dolls, as shown in the image below.

I was initially quite enthused about these 12-inch dolls with slightly over sized heads and chunky foot-shoes worn over their actual Barbie-size feet.  Later, I purchased other My Scene Madison dolls for myself and for little ones as gifts.

My second Madison, Spring Break ©2002, came with a CD featuring Mya and four other artists.  This doll along with Club Birthday Madison and Stylin' Friend (©2004 for both) are featured in chapter 3 of Black Dolls A Comprehensive Guide to Celebrating Collecting and Experiencing the Passion.  (At the previous link, scroll down from page 127 to 128 to view the Madison entries.)

In November 2005,  I wrote an online article about a close friend's granddaughter's My Scene collection.  Read it here.

My enthusiasm with My Scene dolls ended as abruptly as it began for a couple of reasons.  My interest in a wide variety of dolls serves to more than adequately fuel my doll-buying urges.  Because My Scene dolls had been absent from store shelves, I assumed they had been discontinued.
In 2009, while writing The Doll Blogs, my close friend and My Scene aficionado, informed me the dolls were still being manufactured.  What??? (I thought.)   "Why don't I see them in Toys R Us, Walmart, and other stores?" I asked.  She informed me of the following, which is recorded on page 282 in The Doll Blogs: 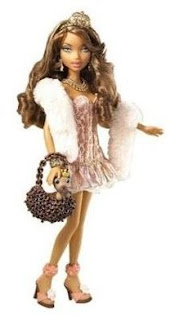 ...My Scene dolls have chiefly been sold in Europe since 2006.  However, each year 10 new dolls are offered at limited locations in the United States.  These locations include Big Lots, K-Mart, and Family Dollar stores.  I did not realize the dolls that I have seen in Family Dollar and Big Lots during the past two to three years were actually newly released dolls.  I incorrectly assumed the dolls at Big Lots and Family Dollar were overstock of “discontinued” My Scene dolls.  While the dolls have not been discontinued, as I formerly thought, they are extremely hard to find in the United States.  As a result of their dearth, many online sellers, set prices two to four times that of the dolls’ retail.  I also discovered that America’s version of Madison is named Westley in Europe. I added Fab Faces to my collection because of her facial mechanism.  The doll is described by the manufacturer as having “innovative, one-of-a-kind movable face feature that allows girls to create five different expressions on the dolls' faces—from frowns to smirks and smiles! Each doll comes with a super glam, ultra stylish lace and glitter dress and her outfit is topped off with accessories no diva can live without—a furry boa, a sparkling tiara, and glittering jewelry!”   Photograph courtesy of the Internet.


As illusrated on the back of the box, depressing one of the five separate buttons on Fab Faces' back will change the facial expression.  She pouts while frowning, looks slightly surprised, looks startled, raises her eyebrows and the corner of her mouth, and smiles.

In 2009, Growing Up Glam Madison was on my friend's wish list for her granddaughter.  She was unwilling to pay the exorbitant amounts many eBay sellers were asking.  So I offered to help her find this "interesting" doll. Interesting, why?  Because with the turn of the dial in her back, Madison grows from 10 to 12 inches tall and gets "curvy," the term Mattel used on the box to describe the breasts the doll develops in her taller state.  The doll also has color change makeup.  Not even aware of the controversy this doll had sparked among some parents who were not very happy about a tween doll that transforms into a teen... with breasts (oh no!), I wanted one for myself. What a blessing (I thought), when in April 2010 I found two Growing Up Glams in an online Australian auction for less than US sellers were asking.  Disappointment set in after an initial month's wait for the dolls led to two, which led to three and a half months before the dolls finally arrived in August 2010!
﻿﻿

By February 2011, with the separate arrivals of Westley Goes Hollywood (box date 2005) and Cafe Chic Westley (box date 2007), the "gotta have 'em" My Scene Madison and Westley mission was accomplished.  These final two traveled from the United Kingdom to America in less than two weeks' time after their separate transactions were completed.   Take notes Australia Post!

Within the past year, I thought about finding new homes for my My Scene dolls, Madison #1 and #2, Growing Up Glam, Fab Faces, and the two Westleys (Cafe Chic and Going Hollywood).  The thought was only temporary, especially now that Close Friend confirmed the dolls' are no longer available in any market, domestic or global.  Their eight-year lifespan ended in 2010.

Follow my Dolls for Sale blog
Posted by Black Doll Enthusiast at 4:00 AM

Email ThisBlogThis!Share to TwitterShare to FacebookShare to Pinterest
Labels: My Scene dolls, My Scene Madison, My Scene Westley