This post is inspired by one recently published by Limbe Dolls illustrating smaller scale fashion dolls.  The  focus here is on Dale and Van, friends of Topper's 6-1/2-inch fashion doll, Dawn, from 1970.  The dolls that were reproduced in 2001 by Checkerboard Toys are also featured here.

During the 1990s, I purchased two Dales and Dale's hard-to-find boyfriend, Van, from another collector.


While the two Dales shown above have different head markings, to my untrained eye, their faces look the same.  The one in the multicolored jacket and chartreuse jumper is marked 4/H62.  Dale in the silver brocade and pink gown is marked 4/H32.  Both have black rooted hair styled in a bubble cut, rooted eyelashes, brown painted eyes that have a slight side glance, and very pale lip color.


Items included with the 1990s purchase were an extra orange halter dress and matching shoes.  Other pieces that I later sold included Dawn dress forms, hangers, and one additional odd clothing piece.

Released a year or so after Dale, Van wears his original football uniform complete with helmet and shoulder pads underneath his #10 jersey.  No wonder Dale fell for him; he's a quarterback and quite handsome!


With molded black Afro and alluring brown eyes, Van is a looker.  Click any of the photos to enlarge for better detail.


Paper dolls featuring Dale were also published by Whitman in 1971.  One example is shown above.

According to research, Topper's Dawn line was on the market for only three years (1970-1973).  Today the dolls still enjoy a huge collector fan base as evidenced by the various websites devoted to the dolls and the 2001 limited edition commemorative issues.  Images of the reproduced Dale doll follow:


The inside flap of Commemorative Dale’s box reads:


Dale was one of Dawn doll’s best friends when they first hit the scene in 1970.  These dolls, along with their friends Angie and Glori, captured the hearts and imaginations of millions of little girls with their cool styles and groovy fashions.  In the process, they became one of the leading fashion doll lines of the era.

In honor of these dolls that touched the lives of so many, please enjoy this first-ever Commemorative Issue Dawn doll Collectible of Dale and join the thousands that have already been reintroduced to “The Most Beautiful Doll in the World” as we celebrate a generation. 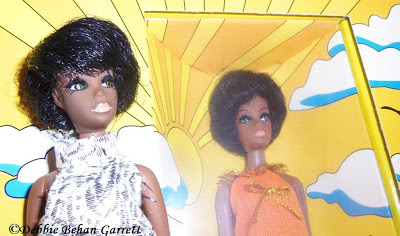 Except for darker lip color and a shade difference in complexion, the commemorative doll appears very similar to the original 1970s Dale as illustrated above.


Along with the reproduced Dale, an additional dark skinned doll, Denise, was added to the Checkerboard Toys manufactured line.  Instead of a bubble cut 'do, Denise has long rooted black hair. Gold lamé and brocade were fashion statements made by the 1970s girls of the Dawn Model Agency and were continued with their fashions of the 2000's.  Denise's extra fashion includes a gold two-piece pants set with brocade jacket.  The skirt she wears matches the jacket of the extra fashion for mixing and matching these "groovy" pieces. 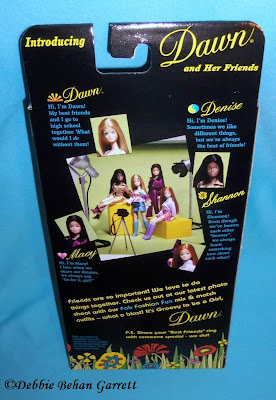 The back of Denise's box illustrates some of the other dolls by Checkerboard.

Van and the other guys were not reproduced by Checkerboard.


Short-lived like their predecessors, Checkerboard's dolls were only marketed from 2001 through 2003.

I had a Dale and a Van as a child! I had forgotten how handsome Van was. Thanks for showing him.

That paper doll book looks rather familar to me so maybe one of my sisters had it but I know I've not seen any of these dolls before.

I like the back of Denise's box as it shows their posability.

So now I know that my repro Dale is really a Denise. The paper doll book brought back lots of fond memories. I think that's the one I had. I enjoyed looking at the pictures on Heidi's website too. Thanks for an informative and nostalgic post!

How fortunate for you, Ms. Leo to have had Dale and Van as a child. I hope this post provided some pleasant memories for you.

The paper doll book looked rather familiar to me, too, Muff. But that's probably because I have been wanting it for several years, always getting outbid on eBay for it, and for the life of me I could not remember if I had eventually purchased it. I checked my doll inventory spreadsheet, couldn't find it, but I don't always list paper dolls there. So I had to look in the paper doll file cabinet, where other things are stored, and go through each paper doll book. I think I had this paper doll book confused with another one that I own. So, when I found it on Rubylane.com for a price I was willing to pay, I purchased it shortly after publishing this post. I am so good at enabling myself.

The dolls are nicely posable.

I am glad I could help you correctly ID Denise.

I look forward to the arrival of my long-awaited Dawn paper doll book. There was at least one other one along with Dawn coloring books.

Heidi's pictures of Dale are nice. I was happy to have found her Dale-devoted site.