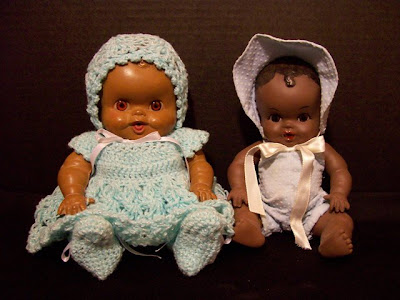 Will the real Amosandra please stand up?
The late 1920s popular radio show, Amos ‘n’ Andy, featuring white actors playing the Black characters, Amos ‘n’ Andy, became a TV show in 1951 with a cast of African American characters. The televised show, according to the Museum of Broadcast Communication’s website “lasted some two years before the program was canceled in the midst of growing protest by the Black community in 1953. It was the first television series with an all-Black cast (the only one of its kind to appear on prime-time, network television for nearly another twenty years).”

Gosden’s and Correll’s Sunday, February 20, 1949, episode, sponsored by Rinso White & Lifebuoy Soap, is particularly of note for Black-doll enthusiasts. In this episode, entitled, ‘Amosandra is Born,’ “Amos and Ruby are expecting and Andy and the Kingfish, [played by actor, Tim Moore] are to be the godfathers… Amos and Ruby became parents for the third time -- with daughter Arbadella and son Amos Jr. receiving a new baby sister, and her name is Amosandra. The new godfathers find themselves with a ‘hot’ baby. This episode led directly into a very successful marketing venture, with the release of the Amosandra baby doll by the Sun Rubber Company of Barberton, Ohio -- the last and one of the most collectible items in a long line of ‘Amos ‘n’ Andy’ licensed merchandise.” (Radioarchives.org)

“Sun Rubber's chief executive, the late T.W. Smith,” is said to have been “such a purist that he went to Harlem to work with a Black photographer so he could get the features and skin coloring just right.” (Mary Etheridge, Past Playthings, November 12, 1998.) 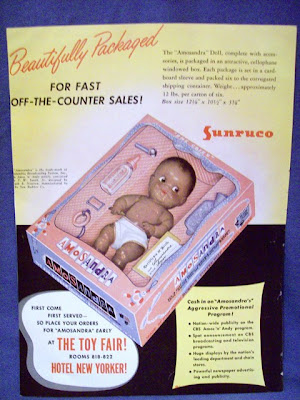 Amosandra Toy Fair Ad, ca. 1949
Amosandra was designed by Ruth E. Newton, who is well-known for her children’s books illustrations. Licensed by the Columbia Broadcasting Company, Amosandra could be purchased boxed alone or in a gift set that included several accessories and a birth certificate.

This little one is still quite popular and surfaces from time to time on online auction sites. Due to the rubber material from which Amosandra was made, and based on how well the doll has been stored throughout the years, the condition of the rubber will vary. In some cases, the rubber has dried, hardened and cracked. In other cases, the doll may be well preserved. Those interested in adding an Amosandra doll to their collections should search online auction sites and do not hesitate to ask questions regarding the condition of the rubber.


Images, text, and ad are from Black Dolls: A Comprehensive Guide to Celebrating, Collecting, and Experiencing the Passion, pages 63-64, copyright 2008 Debbie Behan Garrett.

Answer to question:  The real Amosandra is on the left in the first image.  The doll on the right is a porcelain reproduction.

dbg
Posted by Black Doll Enthusiast at 10:45 AM