The Wednesday before my birthday, I received a text message from doll-sister-friend Betty Ativie, which urged me to take a trip to the post office (PO) sometime that week.  The photo of two packages was attached to the text message.  I informed Betty of my plan to visit the PO that Friday.  However, that same day, my husband brought the packages home after checking our shared PO box that afternoon.  I was good and waited until the actual day of my birth to open the packages.  However, I did not follow Betty's explicit instructions to open the boxes in numerical order.

Engaged in a conversation with my mother at the time, I decided to open the packages.  Box #2 was opened first and I thought to myself, about the lovely hand-sewn dresses, shoes, hair ribbons, tights, and gold stud earrings:  I'll have to find a doll to wear these. Little did I know that concealed inside box #1 was the doll for whom these items were intended.

After seeing the hand-sewn doll made especially for me, I was deeply filled with gratitude that Betty had taken the required time to make not only the doll but also the doll's wig, full slip, undies, and five different dresses.  The note that accompanied the doll indicates Betty's initial intention to send the doll only, but she must have realized there was enough time to make the clothing that box #2 contained. 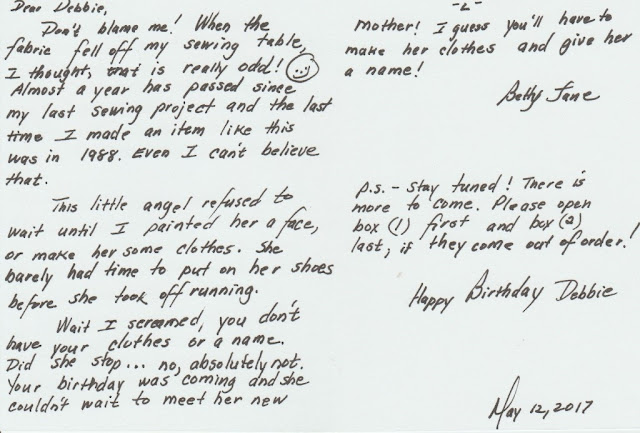 I chuckled at the doll's shared story and was doll-lighted that she wanted to hurry and get to her new home. After her arrival, she let me know her name was to be Patty-Jo, and there were no ifs, ands, or buts about it.

About the Name She Chose:

The comic-strip character, Patty-Jo, created by the first syndicated African American female comic strip artist, Jackie Ormes, was the main character in the big sister-little sister comic strip.  Described as a 5-year-old, Patty-Jo was quite precocious as well as socially and politically aware.  The above Patty-Jo 'n' Ginger comic strip was published a few weeks after Ormes contractually partnered with the Terri Lee doll company in August 1947 to produce the 16-inch heavyweight, hard plastic Patty-Jo doll.  The doll, fashioned after the comic-strip character, had an array of fashions (just like Betty Ativie's Patty-Jo), and was on the market from 1947 through 1949. The comic strip character outlived the doll by several years, running in the Pittsburgh Courier from 1946 through the early-to-mid-1960s.

Betty Ativie's cloth Patty-Jo's bangs, two side ponytails, and the way she stands on her own (when positioned just right) reminds me of the spunky comic-strip character, Patty-Jo.  We both agree the name she chose for herself is appropriate.

After thanking Betty for the doll and wardrobe, she sent the following photos, which document some of Patty-Jo's come-to-life process.

Trying On the Wardrobe:

Because she arrived wearing her undergarments, white tights, and white shoes, Patty-Jo first tried on dresses that would coordinate with the tights and shoes.


Each dress is lovely but Patty-Jo knew she could only wear one at a time.  We both decided the easiest way to choose was to allow her to continue wearing the last dress she tried on, the African print.

After selecting a location in the doll room, Patty-Jo settled in nicely.  Her extra dresses, tights, shoes, earrings, and hair ribbons are stored in a doll trunk and are easily accessible for future redresses.

Can You Find Me? asks Patty-Jo. 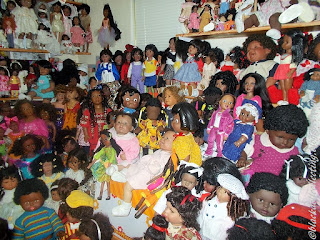 Thank you again, Betty!  I love my new little girl, the Patty-Jo you made, and her fashionable wardrobe!