During a quick trip to Walmart, I was amazed to find Ken #10, Classic Cool in stock.  I had already preordered from ShopMattel during their brief free shipping offer to avoid having to wait for the doll to arrive locally.  Because several of the ones at Walmart had faint facial smudges on the nose, near the hairline or the eye, I chose the best one available to purchase as a duplicate in the event the one Mattel ships has flaws, too. 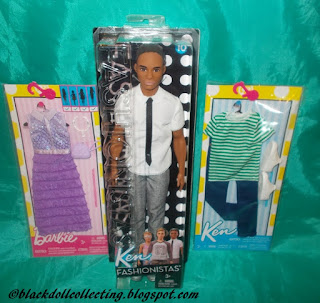 Along with Classic Cool, I also purchased the Barbie dress shown above.  The dress fits all Barbie body types.  The Ken fashion does not indicate the cut, but the shirt looks wider than most Ken shirts. Classic Cool models it at the end of this post.

After his initial in-box photograph, I immediately freed this guy.  He's wearing a white pointed collar shirt, black skinny tie, dark gray pants, and gray sneakers.  The tie is fastened to his shirt with a plastic fastener.

I left the fastener in place and painted it black as illustrated above on the right.  Now it blends in with the color of the tie.

The shirt has a Velcro closure in back and the sneakers have a slit in back to aid in removing and putting them on. 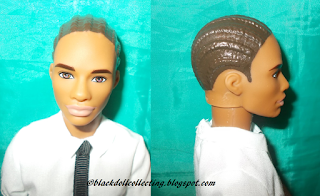 He's a very handsome guy with nice facial features.  Initially, I thought his head sculpt was the same as Hip Hoodie's  I really like the shape of his lips, which are fuller than Hip Hoodie's.  His braids are a first for Ken, but like Zig and Zag's braids were initially, he has no visible parts.  I would have preferred hair over plastic/molded, but for $7.74 at Walmart ($9.99 at ShopMattel), it is what it is. 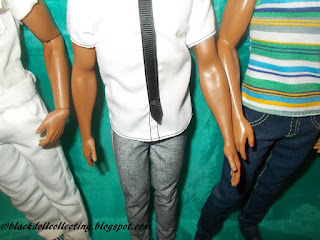 Complexion-wise, his skin tone is about the same as Texas A & M Ken's and Model 17's. 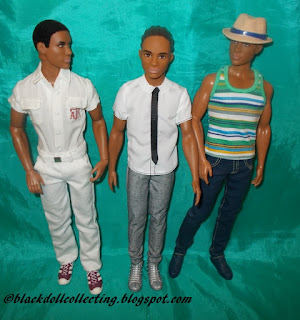 Those who desire articulation, could use Texas A & M Ken's body for Classic Cool.

I created parts in his hair using Toffee Brown acrylic paint, which blends in with his complexion.  The results are illustrated below:


Even though the braids are still plastic/molded, with parts, the hair looks more realistic.