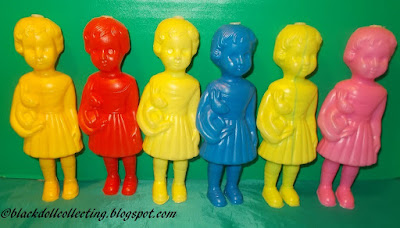 The six colorful dolls shown above are Clonette dolls or baby DeiDei (day-day) dolls.   These were purchased following customer service communication with Tree House Kid and Craft to inquire if additional dolls would be stocked online.  At the time of our communication, their website indicated all dolls were sold out.  I was told they had no plans to restock but they could arrange a purchase from their sister store.

I discovered Clonette dolls several years ago after reading about them and seeing African children and one Yoruba woman with them in the book, Isn’t S/he a Doll?  Play and Ritual in African Sculpture by Elisabeth Lynn Cameron and Doran H. Ross.  The book provides a thorough exploration of different types of African dolls and some non-African dolls that have crossed borders.   The book outlines the dolls' usage for play or ritual.  The next three images are Clonettes that appear in the above-mentioned book, wherein they are described as "plastic doll(s)."

The incidence of twin births is high amongst Yoruba peoples with some births, unfortunately, resulting in the death of one twin.  In the above 1970s photograph of a Yoruba woman, a Clonette is used as an ere ibeji to represent a deceased twin (ah!  the name clone-tte makes sense).  In the photograph, the woman carries the surviving twin on her back and the Clonette is carried in front of her body.  Ere ibeji figures are traditionally carved for grieving Yoruba mothers; however, as evidenced by this photograph, commercially-produced dolls are also used for this purpose.

I had no idea I would ever own even one Clonette until a fellow collector shared a link to the Tree House website where they are described as follows:

These sweet plastic dollies, known as Clonette dolls, or baby DeiDei dolls, are a significant part of African history and have become quite the collector's item! Modeled after colorful traditional wooden and grass dolls, these little girls were the first industrially produced doll in Africa and have been made from recycled plastics in Ghana since the 1950's. Often given as a gift to expectant mothers, Clonette Dolls are said to be a totem of good luck and act as a guardian for babies and children. Their retro look and pop art colors have made them popular the world over. When squeezed, baby DeiDei makes a squeaking sound, adding yet another element of charm to this already-fascinating doll. [https://treehousekidandcraft.com/products/deidei-doll?variant=14709626116]

The dolls have molded hair, clothing, socks, and shoes and hold a molded bunny rabbit.  They essentially are very inexpensively made squeeze toys.  Their thin plastic is reminiscent of the celluloid carnival toys of yesteryear.

As indicated, I purchased the six remaining baby DeiDeis the store had in stock, but prior to their arrival, I saw a photograph of only five of the dolls.  As it turns out, one of the yellow ones Tree House sold me has a blue streak that runs longitudinally from top to bottom.  After contacting the merchant about this and sharing the above photograph, I was given authorization (a free shipping label) to return the flawed doll for a full refund.  (According to Kristen at Tree House, the streaked ones are considered the most desirable by collectors.) I  later decided to keep it, but not for its value.  My initial plan was to dye it brown when time permits and after enough dolls are accumulated to justify creating a dye bath. After I showed the dolls to my husband, explained that these are the types of dolls some African children play with, and shared my plans to dye the streaked one, he said, “No, leave it the way it is.  This is the way the kids receive them, flawed.”  He has a valid point, but I would still like to own a brown Clonette because they are available in brown and black; Tree House was just sold out.

I visited another website, which is devoted to the dolls (ClonetteDolls.com).  They describe their website and Clonettes as follows:


Originated in Ghana during the colonial era and were the first industrially produced doll in Africa. Inspired by traditional woven dolls usually made from wood, grass and fabric these bright colored dolls can still be seen at market stalls in West Africa but production is very limited.


They can be used as a perfect decorative & collector’s item piece.
They come in a collection of colours and different sizes ranging from small – large.  [http://clonettedolls.com/about/] 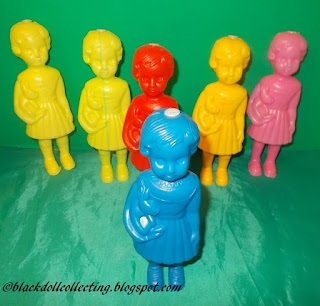 My 8-inch baby DeiDeis will probably be the only size I will ever own.  Whether or not the streaked one will eventually become brown (or black) is undetermined, but I am seriously leaning in that direction.

Now, enjoy, if you will, the results of a Google image search of a variety of Clonette dolls and a few images of African children with their "plastic dolls."

The Dallas Museum of Art has a fine example of a carved ere ibeji.  At the following link, read more about ere ibeji figures and the rituals involved in their use.