Made for one year only, in 1952, the Madame Alexander doll company introduced their Cynthia doll in three sizes:  15-inches (stock #1530), 18 inches (#1830) and the elusive 23-inch doll (#2330 ).  The dolls wore pastel organdy dresses with ruffles and lace trim and coordinating ribbon sashes.  Cynthia uses the Margaret sculpt.  In the 1952 company catalog, the doll is described:

My search for Cynthia in any size, with hopes of finding all three, began during the late 1990s.  After a several-year attempt to complete the collection of three, my dolls arrived, one by one in size order.

The 15-inch doll was purchased in September 2001 from a woman who lived in Charlotte, North Carolina.  The doll had been advertised in Collectors United (CU), which was a monthly publication of doll-for-sale- and doll-wanted ads.  As a faithful CU subscriber for many years, I waited eagerly for each monthly issue to arrive.  Thereafter, I would stop, drop, and  comb the pages for Black dolls of interest.  Cynthia's condition in the CU ad was described as "mint, wearing her original panties, socks and shoes, with hair in original style with original hair clip still in place." I had to have her!


After telephoning the seller, and inquiring about the doll's availability, I was informed, "yes," followed by the seller's assessment that Madame Alexander made "dress me" versions of the doll.  The seller included a nice letter with Cynthia which is shared next:

Enclosed is the Alexander Cynthia doll which you ordered from me thru the Collectors United publication.

I hope you are happy with her; but should you not be pleased, just give me a call & send her back for a refund.  Having purchased 3 other Cynthias from the same lady over a period of 10-12 years, all of which had only original panties, shoes & socks, I've come to the conclusion that these dolls were probably sold with or without clothing as were so many Alexanders at that time.  I well remember buying several 8-in Alex's and a Cissette for my daughter in the early 50's.  These dolls were sold with panties, shoes & socks & the Cissette with stockings, shoes & a little Teddy undergarment.  Since this lady had several dressed the same, I expect she bought them at discounted prices if they were not selling well in the area where she lived.  Alexander sold boxed outfits in that time period.

So, anyway, enjoy if you like her, but don't hesitate to return if you don't.

Thanks for your order
JL

I purchased a doll trunk for Cynthia #1530.  The above shared letter remains stored in the lower drawer of the trunk.

Shorty after Cynthia arrived, I commissioned a seamstress to replicate Cynthia's original ruffled dress, one in yellow organza and another in light blue.  At my request, additional dresses were made in different styles as well as a winter coat and hat for the 15-inch Cynthia.  Several years would pass before I was able to locate the next size.


The 18-inch doll arrived in June 2008 having also been purchased through Collectors United.  The doll was in near mint condition wearing her original pale pink, Madame Alexander-tagged dress with clear vinyl shoes with pink ribbon ankle ties.  The seller believed the shoes were made by Madame Alexander.  (I am not sure this is true).  The fibers of her restyled hair remain silky.


Four years passed before the most elusive Cynthia was located in September 2012.  One of the doll's legs had paint rubs that someone had begun to poorly repair.   Because of this flaw, she was priced to sell.  My plan to repair the leg remained on my agenda until I finally completed this task recently.  Before and after photos are shared of the steps taken to repair Cynthia's leg.

Sixty-two years after being introduced to the doll market, the girls are happy to be together.  They posed for one final photo. 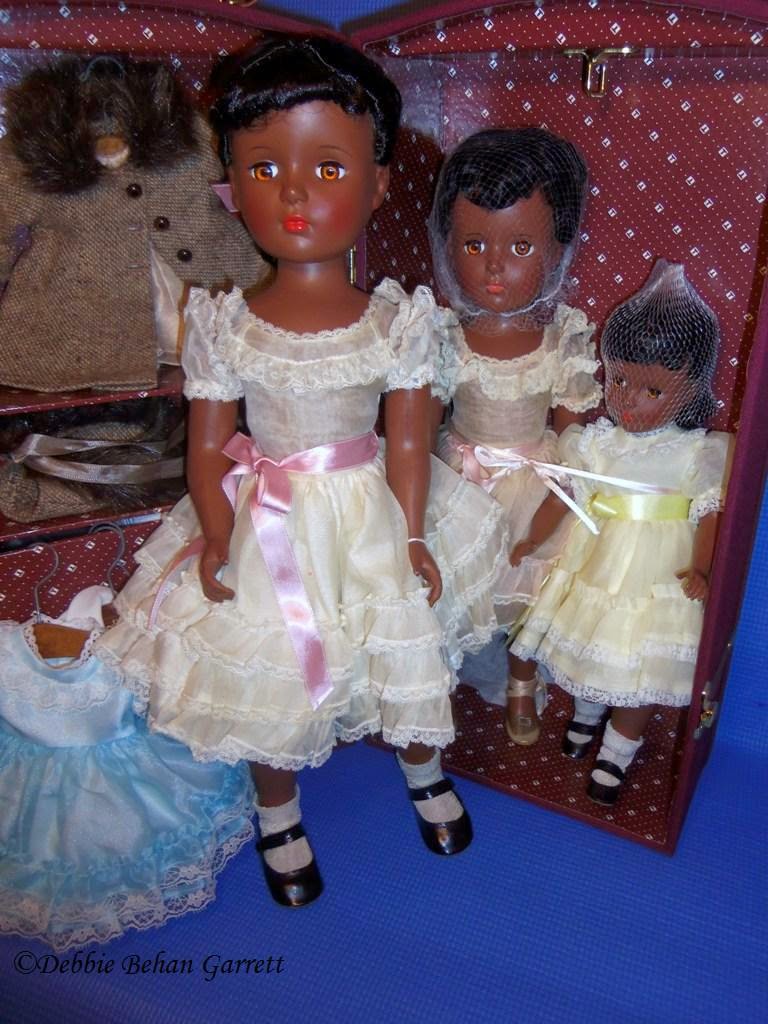 I am able to store the 15- and 18-inch dolls in the doll truck I purchased for the smallest doll.  I would love to find a doll trunk that can accommodate all three.

The dolls are great, but I think that doll trunk is amazing. I've never seen anything so fancy! It's so fashionable and swanky.

The trunk is nice, Muff. I purchased it from Target shortly after purchasing the first Cynthia. Made for 18-inch dolls, it is extremely well made and heavy! It feels like wood underneath the fabric shell. I haven't seen another one like it since.

I agree with Muff, that doll trunks is amazing. I love all the Cynthia dolls too.

I can surely understand your desire to have all three. The 23 in and the 18 in are strikingly beautiful. And those dresses! Congrats on getting all three.

Thank you, Vanessa. The 15- and 23-inch dolls are my favorites. The 15 because she was my first and the 23-inch one because it took so long to find her. Of the three, I do think she is the loveliest.

Good for you, Anita! Thanks for commenting!

I love her trunk (but then, I have always had a soft spot for dolls with trunks full of clothing) and these are really beautiful dolls. I have always had an affection for Madame Alexander dolls. I am curious about the market for these dolls when they were first produced in 1952. How expensive were they and for how long were they made?

Hello RLC - I guess I should have taken additional pictures of the trunk and the clothing I had made for the 15-inch doll. The three versions of this doll were introduced in 1952; they were made for one year only. I am not sure if remaining quantities appeared in catalogs for subsequent years until the original production sold out. They were probably produced in ultra limited quantities and may have sold out during the first year. Since Alexander dolls have been referred to as the "Cadillac of dolls," certainly these were priced a little higher than other manufacturer's similar dolls. How much more or their actual original retail price is not known to me. I will try to investigate this and will post a follow up comment with any additional information I find.