I recently inherited this animated James Brown from my grandson.  When working properly, he shouts and sings his popular 1965 song, "I Feel Good."  He dances and his mouth is supposed to move as he sings.  My brother (RIP) gave this to Grandson when he was 2 or 3 (he turned 18 earlier this month!).  Made by Gemmy Industries, Corp. in 2002, James Brown needed batteries when my daughter gave it to me a few weeks ago.  Neither I nor my husband could remove the screw from the battery cover on a first attempt using a small Phillips screwdriver.  I did not have a 6-volt adapter that can be optionally used for power.

Feeling as powerless as James, I had resigned myself to the fact that I'd just have to enjoy him in the mute state, in remembrance of my brother and the days as a toddler when my grandson would sing and dance (in public!) like James Brown.

A few days after our brief struggle to remove the battery cover, my husband came into the doll room holding Mr. Brown and a larger Phillips screwdriver.   Smiling, he proclaimed, "Nothing can defeat me!"  I asked, "You got it open?"  He said, "Yes!"

So we both went into the kitchen where I retrieved four new AA batteries (you know, from that kitchen drawer where batteries, candles, and other paraphernalia are kept).  With fresh batteries in and the battery cover closed, I pushed the button on the base.  James Brown immediately began singing "I Feel Good," and swaying his hips from side to side.  His mouth moved some, but not as it is supposed to move in sync with the words of the song.  His arms, one of which I knew was loose, also did not move.  I pointed this out to my husband who had already mentioned the barely moving mouth.

My husband asked me to remove James' shirt and vest.  I was only able to remove the vest as the buttons on the shirt are nonfunctional.  I was able to untuck the shirt and pull the sleeve up enough for my husband to see that a pin was out of its socket.  He replaced the pin.  I turned James on again and that arm began to move but the other did not.  While removing the vest, the pin in that arm popped out of socket!

Husband examined the other arm and discovered a crack in the plastic that held the pin in place.  Another pin that attached to a piece of plastic on the back was out of the socket, too.  Husband placed the back pin into the pinhole and applied glue to the cracked plastic of the arm pinhole.

After the glue dried, all pins and screws back in place, and James' shirt and vest properly on his body, I shot the following video which doesn't capture his initial shout, "Owww, I feel good."


My husband boasted, "Now, you know I can fix the mouth, too."  I said, "Yeah, I know, but we won't worry about that."  I am just glad to know that Mr. Brown can still turn his head, move both arms, and sway his hips from side to side while he sings and shouts, "Owww, I feel good..."

In addition to the Shoutin' James Brown, Gemmy Industries Corp. also produced animated figures of Ray Charles and Louis Armstrong as documented in the next photograph and text from Black Dolls a Comprehensive Guide to Celebrating, Collecting, and Experiencing the Passion: 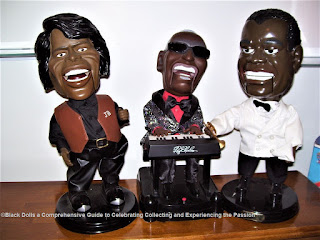 In the next video, see the real James Brown singing and dancing on Hollywood Palace hosted by Sammy Davis, Jr., on 03/15/69:

dbg
There is always something to collect and write about. Black dolls chose me.

Another figurine I knew nothing about (but having attended his concerts as a teenager, I certainly know all about Janes Brown)! This is so much fun.

I'm glad you enjoyed seeing the figure in action. I have since added photos of other figures by Gemmy Ind. Corp. as well as a 1969 video of the real James Brown performing on the show Hollywood Palace.

These are so much fun.Do you know which songs Ray and Louie sing?

Cute figure! Great teamwork - you and your hubby! Congrats on your success.

Thank you, D7ana. I felt like a surgical technician for a couple of seconds as I was passing tools to him.

I just pulled one out of my garage that used to be my Grandmother’s. She passed away in 2006. I was able to find an AC adapter compatible with it. It sings but it also does not dance. Looks like I’m gonna try to do some surgery on it myself. I may look to sell it.