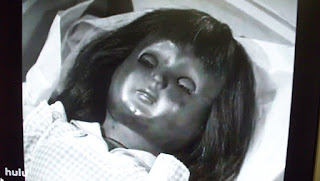 I took these still shots to capture, study, and share the black doll featured in the 1965 episode of Alfred Hitchcock, "Where the Woodbine Twineth."   The full-length episode was available for viewing online at the time this post was originally published.  It is no longer available, unfortunately. 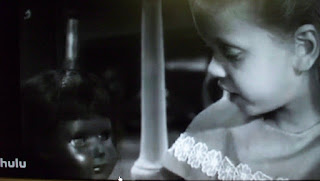 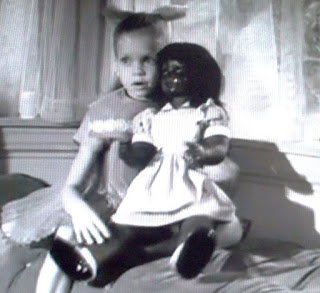 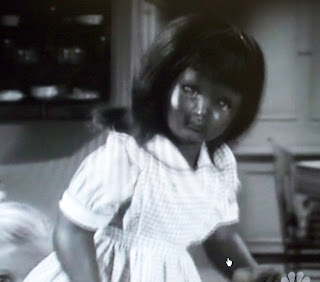 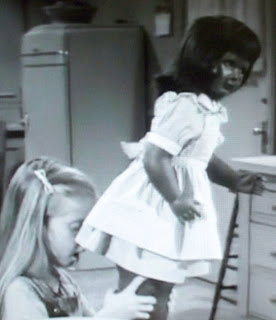 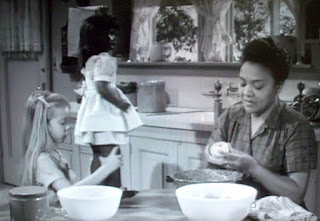 Hitchcock's "Where the Woodbine Twineth" is about an orphaned girl who goes to live with her grandfather and his stern, spinster sister, her great-aunt.  Grandfather gifts Eva, who already has imaginary friends, with a black doll that she names, Numa.  In classic Alfred Hitchcock style, a turn of events brings the doll to life (live doll played by actress, Lila Perry).

After viewing this episode, I wondered whether Numa was on the market in or around 1965 or if she was a mere set doll.  After viewing the episode, taking and examining the still shots, I believe Numa was a white doll painted black/brown.  Interestingly, the dress and hairstyle of Lila Perry is quite similar to that of Patti Playpal dolls.


Click the play button to see Eva's affectionate interaction with Suse and later her reaction to Numa, a gift from her doting Grandpa.


Click the play button to view the final scene of this episode when Eva and Numa exchange places (there is a lot of background noise in this poor quality recording).


Commentary:  During the 1960s when this Alfred Hitchcock episode aired, status and perceived privilege were often  depicted in televised shows as well as in film.  Art imitated life, particularly southern American life where white privilege was blatantly apparent. The portrayal of  African Americans as insignificant beings or hired help was the unfortunate norm on film and TV, as evidenced in this Hitchcock episode specifically the aunt's harsh treatment of Numa at the end.

We've come a long way here in America, but we still have an even longer road to travel.

Email ThisBlogThis!Share to TwitterShare to FacebookShare to Pinterest
Labels: alfred hitchcock, dolls in the media, Numa