How Dasia Becomes My Maya


After the death of author, poet, actress, dancer, and singer Maya Angelou on May 28, 2014, who was also one of my favorite African American female personalities and writers of works I enjoyed reading, I wanted to capture her likeness in doll form.  I decided Big Beautiful Dolls, Dasia, would be the perfect doll for this creative undertaking.

I contacted Georgette Taylor, one of the creators of the Big Beautiful Dolls line to inquire about the nude Dasia's she mentioned having when we communicated about her guest post here.  She still had some!


Within a week after ordering her in July, Dasia arrived and lay nude on a credenza adjacent to my personal desk, where I usually place to-do or unfinished doll projects.  As long as these things remain in sight, whatever intentions I have for them eventually get accomplished.


I gathered several headshot images of my favorite writer and later selected the one I felt would be most appropriate in doll form.  I definitely wanted one that captured the dazzling smile that was unmistakeably hers.  I measured Dasia's facial dimensions before inserting the image into a WORD document.  Resizing and printing were followed by using Microsoft Paint and GIMP to create a border that would extend to the doll's ears and neckline.  The goal was to cover the entire facial area once the image was transferred to the doll's face.


The image was flipped horizontally before printing on T-shirt transfer paper and ironing it onto a sleeve of a white T-shirt (as shown above).  Trimming was next.

Initially I had planned to glue the transfer directly onto Dasia's beautiful face, but decided to try another method that would preserve the doll's face and still achieve the desired effect.  (As much as I wanted a Maya doll and even though I have two other Dasias, I just could not handle permanently changing any one of my Dasia's faces.)

I created a mold of Dasia's face, similar to the wig cap molds I have created in the past: 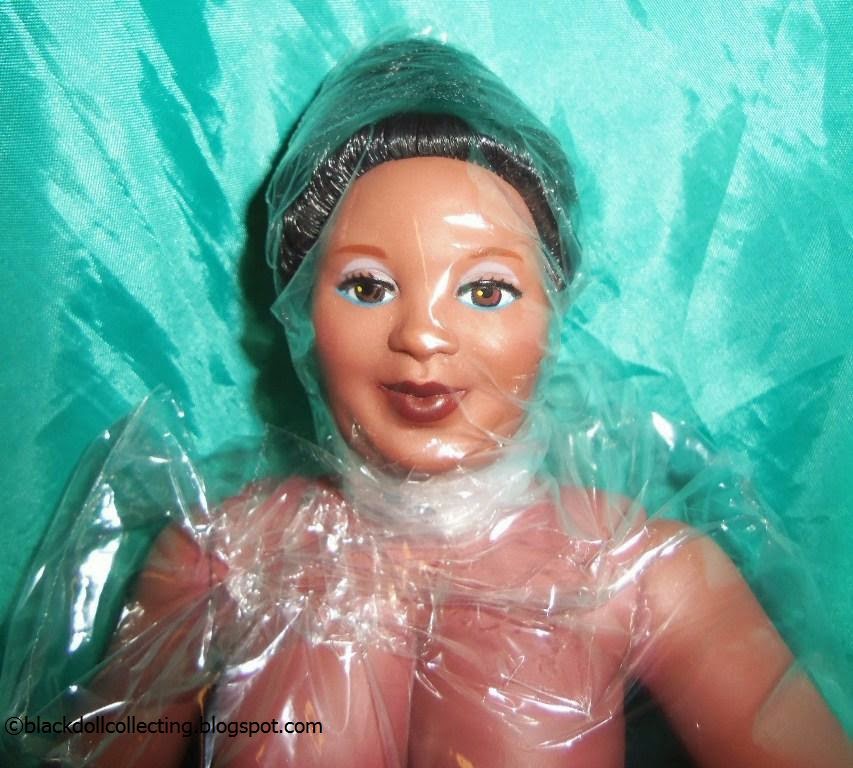 A plastic baggie was wrapped around Dasia's head and secured with a rubber band at the neck. 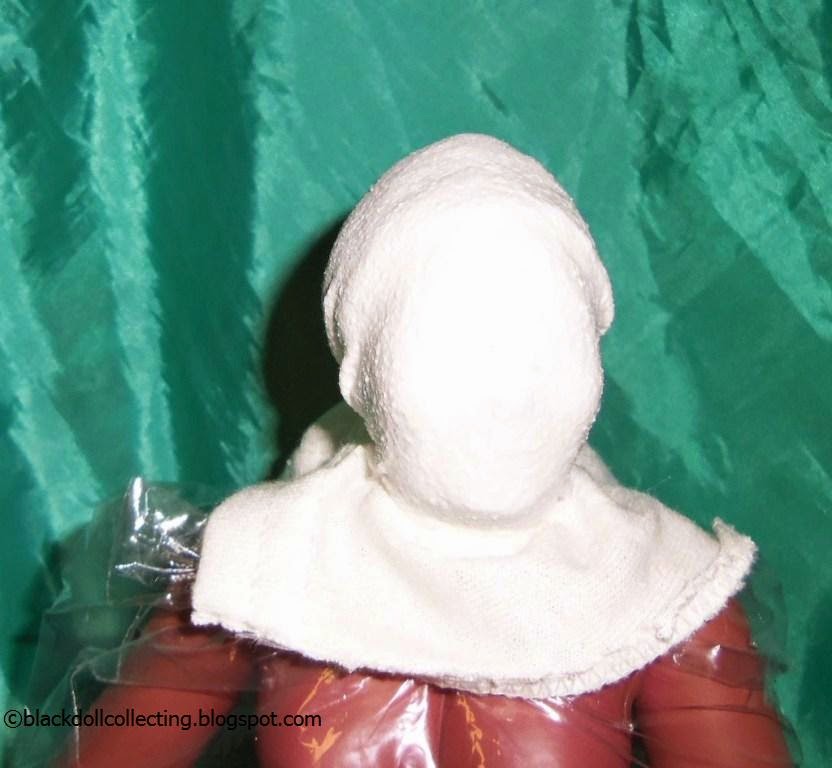 A piece of the white T-shirt was placed over the plastic-wrapped head and also secured with a rubber band.  Layers of Aleene's Tacky Glue were applied over the fabric and allowed to dry for 24 hours.  This created a head mold.

After removing the mold, enough of the facial portion that would extend to the doll's ears was cut away.  The transferred image of Angelou's face was glued to the mold and allowed to dry.  Next, thumbtacks were inserted into the mold in the earlobe area and directly into Dasia's pierced earlobes.  The thumbtacks remained in place until the mold fully captured the shape of the doll's face.  In the next image, the thumbtacks have been replaced with earrings, which serve to hold the face over of Dasia's face without the use of glue or other adhesive. 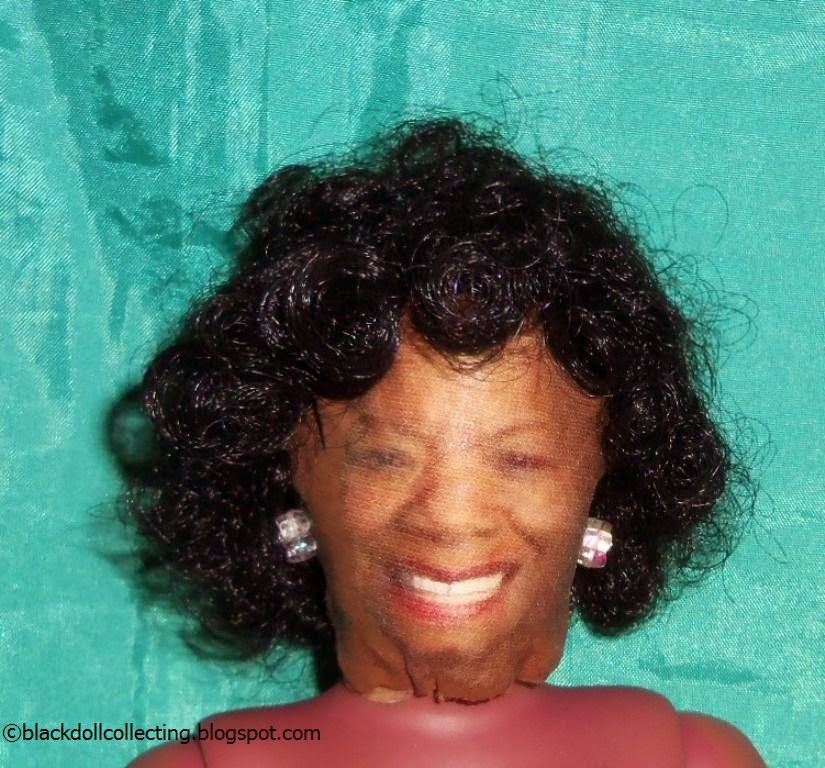 The doll's hair was fluffed into a curly Afro allowing the front and sides to cover the edges of the new face. Since edges of the neck area remain a little crimped and jagged, I fashioned a neck scarf (seen in the next image.)

Clothing and shoes posed a problem initially due to the doll's fuller figure and width of her barely arched feet. 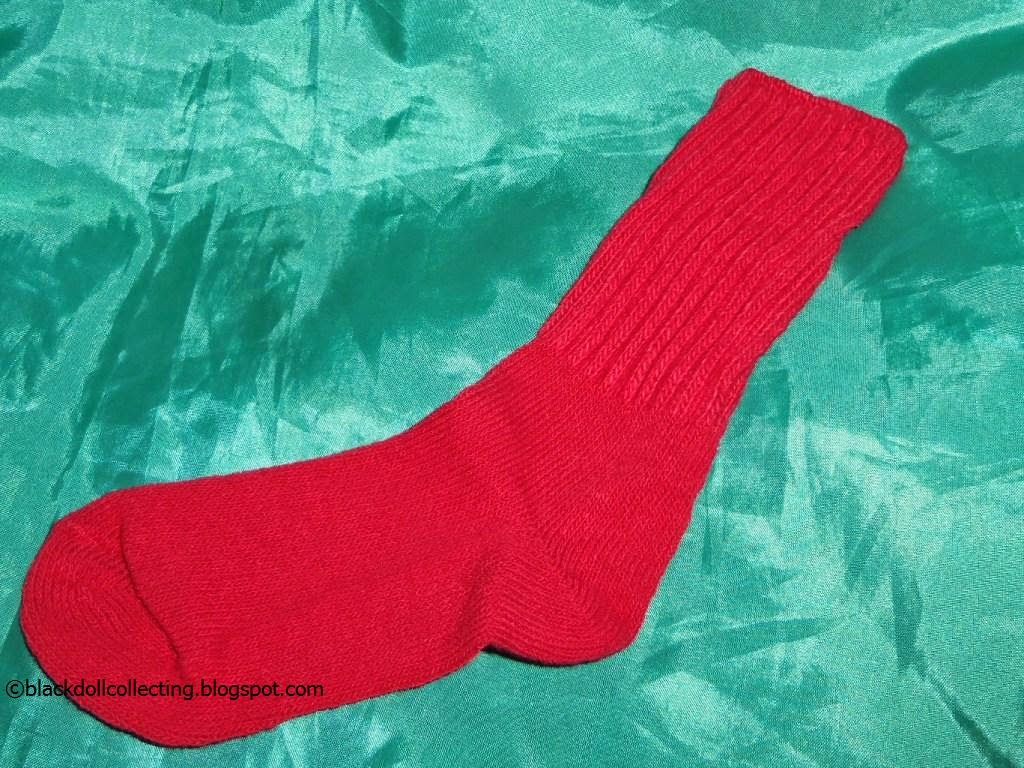 I fashioned a red dress from a toddler crew sock (already on hand in my grandsons' sock and underwear drawer).  Shoes were made using other materials on hand (black leather for the sole, black foam for the innersole, and white elastic painted black for the two straps on the forefoot and the strap that extends around the sides of the doll's foot.  The shoes are shown two photos above.  The dress is shown next:


The toe portion that I cut away from the sock served as a temporary cap to give the hair the desired shape and length appearance.  (I did not want to cut Dasia's hair, which is now Maya's!). 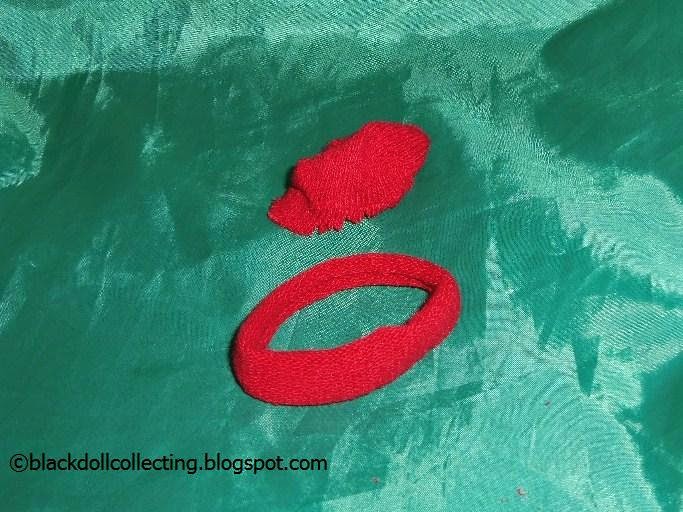 To cover her exposed shoulders, I cut the end away from the sock material that had been used as a cap.  This created a loop of fabric which I turned inside out so the rolled edges would not be exposed.  The doll's arms were taken through each end of the loop to create a shrug.  Her back is exposed, but I am sure Maya does not mind.

I will eventually find a better fashion and shoes but for now, thanks to Dasia and my heavy dose of determination, my Maya doll-creating mission has been accomplished.


When someone shows you who they are, believe them the first time. ― Maya Angelou
dbg