It was either at the 2004 or 2005 International Philadelphia Black Doll Show when I first saw up close and personal hand-carved dolls by doll artist, Kor January.  Before that time, I had only seen photographs of his dolls.  At the doll show, even though I admired and coveted ownership of one, I passed on purchasing due to cost.  Throughout the years, I regretted that decision.

Recently, a member of my Facebook group shared a photograph of one of her doll groupings.  One of the dolls in the group was by Kor January, which reminded me that my collection would not be complete without one of his hand-carved, one of a kind dolls.  As a comment to the posted photo, I wrote:  A Kor January doll is at the top of my wish list. I wish I knew how to contact him.

Several other group members mentioned their desire to own a Kor January doll as well.  Another collector located the artist's telephone number and contacted him.  During their conversation, January shared several photographs of available dolls.  The shared photos and his telephone number were posted to the group.  Of the dolls shown, two tugged at my heart strings, one more than the other.

After a lengthy conversation with the artist, I purchased the doll that is partially shown above.  This 14-inch doll that is constructed of poplar wood for body, lower arms/hands, and lower legs/feet with oak used for upper arms and legs, can be seen in full in the next photos that Kor shared with me after our several-minute conversation concluded.


In the photographs, Kor illustrates the doll's multiple poses, which he said is not a feature he adds to all dolls.   He felt the need to apologize for getting carried away with photographing my little girl and sending as many of the photographs to me.  I reassured him that an apology was not necessary.  The photos just made me more eager for her to arrive.

Because he was not pleased with the pants she was wearing originally, before sending my doll, Kor made another pair of pants using the same vintage striped mattress ticking fabric she wore originally with her original off-white ivory blouse.


After she arrived, I bonded with her immediately and took a few additional photographs, but as I suspected, mine are not as great as Kor's. 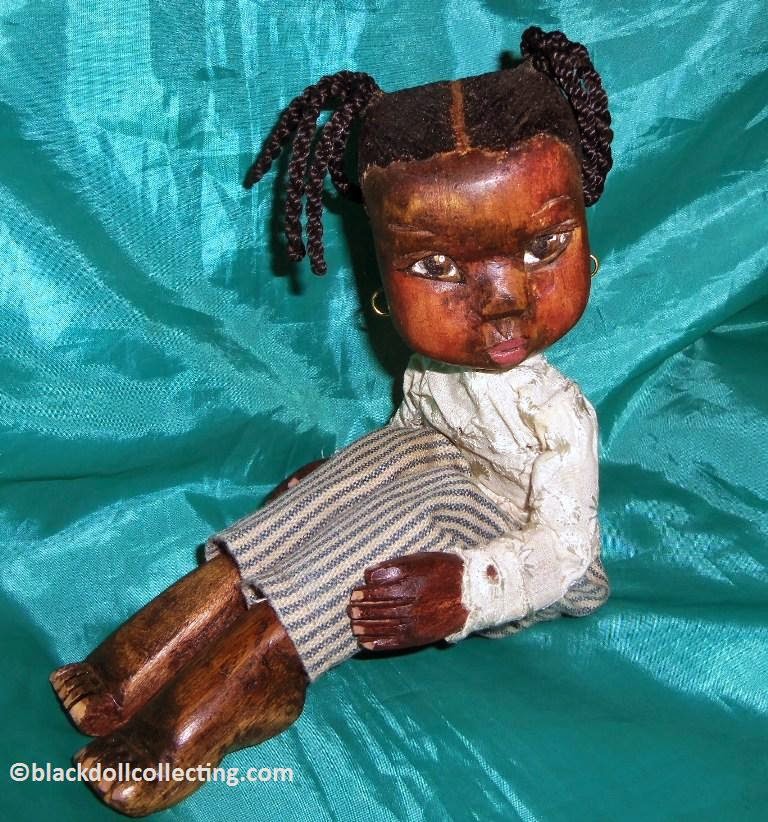 Kor said he will leave the naming up to me.  I haven't decided firmly on what her name will be, but until I do, I think I will call her Libbie.

*****
A native of Monrovia, Liberia, who now resides in Cincinnati, Ohio, Kor January's artist profile is included in Black Dolls Proud, Bold & Beautiful by Nayda Rondon (Reverie Publishing Company, 2004).  About his dolls, ninety percent of which are children, January shared with Rondon:


...With my art I escape into fantasy to create glimpses of dreams, visions of what I'd like life to be, or something that captures a moment or feeling in time that I want to re-create.  I want my work to take you to a better place.


In an online search for images of his dolls, I only found blog-post coverage of a 2011 Columbus, Ohio doll show here.   Kor also has an Etsy shop that opened in 2012, but it is currently empty.  At the time of this writing, he plans to exhibit his dolls at the 2014 Detroit Doll Show on November 1, 2014.

I believe there is power in the tongue (in the words we speak) and that we can speak things into existence, both positive and negative.  For this reason, I also believe, it is very important to be mindful of the things we say as well as the thoughts we think.


dbg
Posted by Black Doll Enthusiast at 12:00 AM