Cleopatra B Keisha Joins Ashanti and Cleopatra A Keisha

Keisha as Cleopatra, a 23-inch, all-vinyl doll was found in early April for $9.99 plus shipping (shipping was $15!). She arrived gritty with bare feet wearing original pants and head wrap.  The pants were at her waist, exposing her bare chest. I assumed these should cover her chest; however, in an image in Black Dolls an Identification and Value Guide 1820 to 1991 by Myla Perkins (Collector Books 1993) the doll's pants are oddly at her waist.

Described as Keisha Cleopatra B. (the company made three different Cleopatras, thus the B that follows her name), as shown in the book image, above, left, "the doll wears an original one-piece pant outfit in a beautiful African print, gold colored plastic necklace, gold sandals, white beads in braided hair... [and holds] a gold painted grass fan."  Keisha as Cleopatra A is shown on the right in the above image.  My doll's beads, if they were ever present, are missing along with her fan and shoes.  Her eyelashes were also missing, which made her eyes look bare and cold.  I added false eyelashes to improve her appearance.  See how this was done in the next four photos: 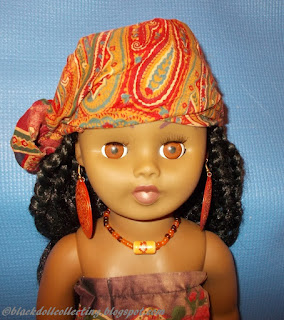 After cleaning her body thoroughly, adjusting her romper to cover her chest area, and adding the eyelashes, I pierced her ears and inserted burnt orange earrings into her earlobes.  An elasticized beaded bracelet serves as a necklace.  Both the earrings and "necklace" coordinate with the earth tone colors of the romper and head wrap.

The next task was to make a pair of sandals for Keisha.  Images and captions of how this was done follow: 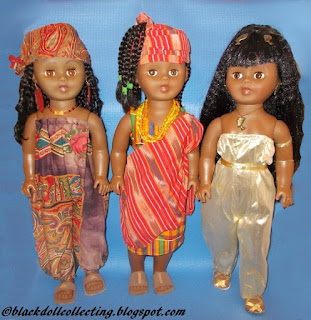 In the final photo, Cleopatra B Keisha joins Ashanti and Cleopatra A Keisha.  Ashanti arrived in July of 2015 and was featured in a post which provides additional details about the 1980s Keisha Doll Company. As outlined in that post, Cleopatra A was purchased during the late 1990s/early 2000s.

The Keisha Doll Company made over 30 different Keisha dolls representing a variety of historical females and males of African descent.  Very few of the 30+ dolls were dressed in everyday fashions, such as a school girl.

Do I need any more Keishas beyond these three?  No, absolutely not, but if a Keisha dressed in contemporary clothing crosses my path, I will stop at four.