Please first allow me to introduce you to "the doll" that received a doll.  Her name is Raven. She is part of the Maru and Friends line of multicultural dolls created by Maritza Gutierrez and sculpted by Dianna Effner.  After a voting process in January of this year to decide which artist or manufacturer to consult regarding the possibility of creating this year's club doll, my online doll group selected Maru and Friends with Raven as our doll choice.

Working with Maritza Gutierrez began immediately following the voting process.  She was quite accommodating.  Group members were allowed to special order Raven from the company's website.  In an effort to help make Raven our own, Maritza graciously allowed us to select an in-stock Maru and Friends fashion to replace the stock fashion Raven usually wears.  She further offered to have a certificate of authenticity prepared for each club member, which bears the doll's name, the name of the club and the year.   Special ordering concluded in February after which time the dolls were shipped to us.

My Raven arrived in mid February wearing the Spring is in the Air fashion that the group selected:  a lovely white satin dress, white shimmery tights, white patent-leather Mary Jane-style shoes and a white satin drawstring purse.  Raven has a long straight, slightly textured wig with two front side braids. Her eyes are hazel.

To truly make her our own club doll, we commissioned Rachel McCullough Sherrod of Starkey's Daughter Cloth Dolls to make another dress for Raven as well as a companion doll with matching dress.  Rachel began this project in March.

The first companion dolls and dresses for Raven have been completed and shipped. 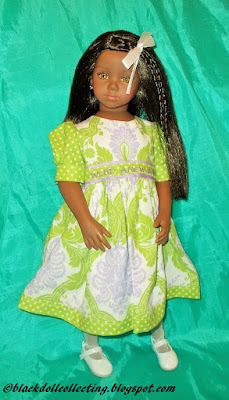 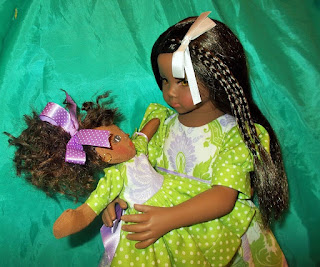 Raven examined Ruby Zee closely from head to toe.  It was unanimous, the two of us love her! 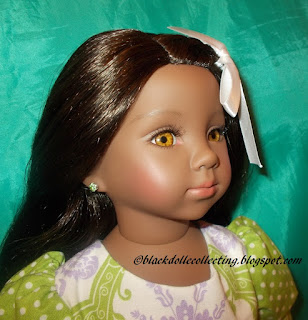 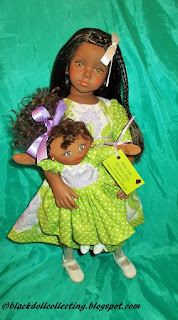 After her initial photos were taken in February, Raven was placed back inside her box and the box placed inside the original shipper.

Thanks to Ruby Zee's presence, Raven is now free from the confines of cardboard and has joined the general doll population with her new doll!

Check out my eBay listings here.
Posted by Black Doll Enthusiast at 12:00 AM