In 2009, I began buying dolls from international eBay sellers with a focus on vintage black dolls made by Pedigree (the 1931-registered name of the doll-making subsidiary of Lines Bros, a British toy maker).  Years earlier I had acquired a pair of 1950s Pedigree-type dolls from a New Zealand seller.  That pair satisfied my Pedigree-doll thirst until my interest in these very dark-skinned dolls resurfaced in 2009.

Like my original NZ Pedigree-type dolls, my other dolls from other global areas have very dark brown to black complexions.  Made during the 1930s through 1950s, these deep hues were the norm for black dolls made in such places as New Zealand, Australia, and the United Kingdom.  They are made of composition (1930s-40s) and/or hard plastic (a new material used in doll making beginning in the late 1940s).  See a group picture of some of these dollies below.

Absent from my collection was a rarer, blue-eyed brown skinned doll made by Pedigree, whose complexion is often described by British and Australian sellers as "dusky."  More often the doll is described as Asian and less often as "Indian," but never black.  The doll's physical attributes do not look Asian or "Indian."  Why is this one with the lighter  brown complexion not referred to as black, like the others?  Are the blue eyes or combination blue eyes and lighter brown skin tone the reason?  Dusky... that term puzzled me.

Even so, my search for Pedigree and other dolls made in England included one of these blue-eyed, brown-skinned dolls.  Unfortunately, the price of acquiring one on eBay was usually cost prohibitive, particularly after the asking price in pounds was converted to dollars.  The Australian dollar conversion is more comparable to the US dollar, but sellers' asking prices are usually well over 100 Australian dollars.  With shipping factored into the final cost, the doll seemed impossible to find at a price I was willing to pay.  Over $100 after conversion was not my willing price.

Finally, I located one at a reasonable price and did not use out of pocket funds to pay for it.  Instead, I used some of the proceeds from the sale of over 50 doll magazines sold on eBay in June.  Interestingly, several of the magazine buyers live in the United Kingdom.


My little, 10-inch British girl arrived during the week of June 24, 2012, from Sheffield, South Yorkshire. Her feet were bare. Her dress was tattered and her hair needed combing, as illustrated in the seller's image below. 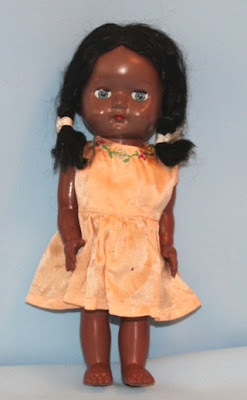 I was well aware of the doll's super preloved condition before completing the purchase but could see her potential.

I have since redressed this circa 1950s/60s, 10-inch, hard plastic doll, marked "Made in England," in Helen Kish's Bitty Belle Magnifique's original fashion and shoes.  She's an inch shorter than Bitty Belle with a wider torso, but I was able to get both the white underdress and sueded blue overdress to snap closed in back.

She looks (and feels) so much better now.

The sun is setting as a shadow of darkness begins to appear.  That is what dusk means to me.

▸
not very bright
more...
▸
dark, because of shadows or because night is coming
more...
▸
with dark skin. This word is now considered offensive.
more...


The third definition, with dark skin, is why this archaic term continues to be used by some to describe this doll's complexion.  Old habits are often hard to break, even when considered offensive.

I see her as brown.

I see her as cute.

I see her as still loveable.