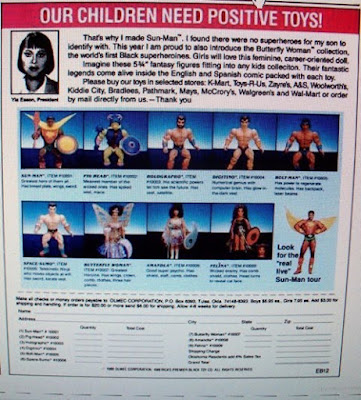 "Our Children Need Positive Toys... that's why I made Sun-Man..." reads the above 1986 ad for Olmec's line of Superheros and Superheroines, (the Butterfly Woman collection).  Click the ad to enlarge.

Yla Eason (pronounced Y-la) received inspiration from her 3-year-old son to create a line of black toys for boys and girls. It was her son’s declaration that he could not be a superhero because He-Man was white that prompted Ms. Eason to make a change in the toy market and in her son's mindset.

Olmec Toys was founded in May 1985. Their line of toys for boys and girls were geared toward the underserved African American demographics. As a parent herself, Eason knew there was a market for her toys because other African American parents also wanted playthings for their children that looked like them. The goal was to promote self-pride. 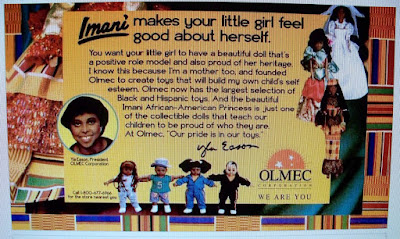 There were barriers to Eason's success.  But despite being told by a toy executive that black parents buy white dolls so there was no need to disrupt the “status quo,” Eason’s determination and dedication resulted in a several-year successful line of  dolls and action figures. 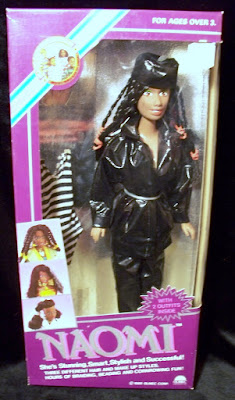 
The Sun-Man action figure was the company’s first toy. Naomi, an 11-1/2-inch fashion doll, was Olmec’s first doll (pictured above). Using the same head sculpt, the doll’s name was changed to Ellisse one year later and eventually finally changed to Imani.  Imani received a new face sculpt in the early 1990s.

As an inclusive toy manufacturer, Olmec created action figures and dolls for African American, Hispanic, and Asian children from 1985 through approximately 1997.  A nice selection of baby dolls were manufactured as well as fashion dolls (see pages 5-7 in Yla Eason A-below).

No longer in the toy or doll-making business, Yla Eason, who holds an MBA from Harvard Business School, is a professor at Medgar Evers College, CUNY.