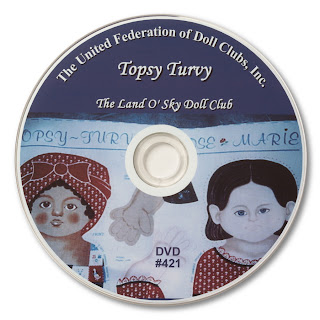 I have been a member of United Federation of Doll Clubs, Inc (UFDC) for several years.   I agree with their statement:  The study of dolls is truly the study of humankind. Few artifacts reflect our history as accurately as do dolls.

My previous post on the Topsy Turvy doll was an attempt to explore several aspects of the doll's creation:  origin, original maker, and to understand the two-dolls-in-one concept with one hidden while the other is exposed.

In 2007, I purchased UFDC's slideshow presentation of the Topsy Turvy Doll, viewed it at that time, and had forgotten that I owned it when I began my recent Topsy Turvy research.

I stole 20 minutes from my day and reviewed the DVD to refresh my memory of The Land O' Sky Doll Club's UFDC presentation of this doll's rich history and unique origin that can be traced back to American slaves, whether verbally documented or written.

The photography, research, and Topsy Turvy script were prepared by Land O' Sky Doll Club member, Suzi Smith.  The DVD is described by UFDC as follows:


This DVD program features numerous variations of the Topsy Turvy dolls ranging from home made to commercially produced. It includes 80 images featuring dolls from the late 19th century through the 20th century.


To conclude my research on my previous post about the Topsy Turvy doll, I have transcribed most  of the narration of the DVD and used bold print for the pertinent areas that address the posed questions and/or restate the theories regarding the design concept.  The transcription is as follows:

Topsy Turvy was a play doll with a double layered skirt and a head on either end.  The lower body and the legs appeared to be covered by a skirt.  Actually, they don’t even exist.  Instead of these, another head appears when turning the doll topsy turvy or inside out.  Very often these dolls had one head as a Caucasian and the other as African American.


Topsy started as a home made rag doll on through papier mache, porcelain, celluloid, hard plastic, and composition to modern times.  Most of the older dolls were sewn from fabric remnants such as silk or velvet.


For many years flour was packaged in floral-print cotton sacks.  [Both sides of a flour sack doll are shown and described].  Thought to have originated in the antebellum South where they were made by black women who cared for white children of the plantation.  [Another view of the flour sack doll is shown.]


The Pennsylvania hex doll had heads of kid leather.  The pig’s head cures warts and other human ailments.  The human head casts spells on a neighbor’s horse or crops.  Dewitt Burton[sp] patented a multihead doll in 1899.  Some of these dolls were intended to be magical objects.  [One is shown].


[Another early Topsy Turvy image is shown.]  This very old, fragile, 7-inch doll was probably home made.  She has been much loved and played with over the years.  The white doll has an elegant black silk dress and mock cap trimmed with lace.  The silk costume has started to melt.  The foot side [perhaps she said “flip”] of the previous doll has the same embroidered features, but costumed with a lesser quality fabric.


During the 1800s, slavery was a part of many southern little girls’ lives.  Playing with the Topsy Turvy doll gave them a chance to identify with another culture and choose either color of doll.  [An example is shown.]  A front full view of this old, 11-inch doll with hand embroidered facial features.   Slave children would flip the Topsy doll to the black side when an overseer or plantation owner was in sight.  At other times, the little black girl would imitate her mother caring for the white child.   Most early black and white Topsy Turvy dolls were racial stereotypes.


[Another doll is illustrated.]  The back of the head showing the unique treatment of hair for this side of the doll.  Sometimes crying/smiling; awake/asleep; happy/sad; or screaming/smiling faces were used.  The black head also has hand-embroidered facial features.  Various face styles were displayed on the dolls by embroidered red or various types of paint.  A small piece of animal skin [fur] was attached to the black head.  The wig is sewn to the head in a very crude manner.


In 1894 Douglas [?] received a patent #19850 for an upside-down doll.  Spurred by the popularity of these imaginative figures, mail-order firms, and cloth manufacturers began producing their own version about 1900.

Albert Bruckner created an early patented lithographed doll in 1901 representing an 18-inch white child and a black mammy… Bruckner dolls were distributed by Horsman.  A Playtime 1905 patent described the face of the rag doll as designed with finely textured cotton or silk so the photograph could be printed on it.  The rest of the body, back of the head, and limbs were made of a coarser material.  The 18-inch doll could be stuffed with rags, cotton batting, sawdust, or excelsior.


[The narrator describes the following dolls:]


[Describes an early German Topsy Turvy] …The black child has molded hair and painted eyes with exaggerated lips.  The black side often had character-like facial features.  Her costume was not as fine as the white child's.


[The narrator tells a story of a German Dream Baby Topsy Turvy that was separated by a doll shop owner because she felt she could make more money if they were sold separately.  The dolls were sold to a customer who put the dolls back together.]
[Several other Topsy Turvy dolls are described including Eva and Topsy constructed from a commercial Vogart pattern.]

[Shown] This circa 1926 Mary Had a Little Lamb is 12-1/2 inches from lamb head to Mary head… The company that made Mary also made Red Riding Hood and Wolf with a music box.  What a sweetie pie!   Hasbro Industries, Inc. produced a Topsy Turvy kit to make the entire doll in 1974.  [The inside contents of the kit are shown… everything included in making a finished doll.]
[Simplicity pattern and McCall’s pattern (copyright 1942) are shown.]

[The finished doll from a Simplicity Pattern #8210 is shown.]


Fabric companies made cutout Topsy dolls during the 1990s.  [A finished doll is shown.]


The Madame Alexander Company has made Topsy Turvy dolls since 1926.  [An 8-inch hard plastic, circa 1990s, Cinderella in fancy ball gown is shown.  Poor Cinderella, the doll’s other head and dress are not shown.]


One of the most frequently found Topsies nowadays is the ATC 123 doll.  This is Red looking out through the box.  The many ways the doll can be turned to show a different character [illustrated].  Red, Grandma, and Wolf are found in various sizes.


Many dolls were made for souvenir dolls to different trade markets.  This 12-inch doll [the doll is shown] was made by a famous artist in New Orleans.  She used the stamp method to make the lips.  [A different doll is shown.]  This doll artist also used a stamp to create the mouth.  Note the difference in the lip stamp from the previous doll [the black doll’s lips are quite exaggerated].  This mammy has a bandanna and earrings.


Some of the dolls made in the 1920s to 1930s were often crudely made.  These simply made 6-inch dolls have wild garish prints on their cheap fabric dresses [the dolls are shown].  These 10-1/2-inch ladies are also from the souvenir trade of various countries and were most likely designed by an island woman to subsidize her family’s income…

This home made Topsy [the doll is shown] has embroidery features different from any previously pictured [the doll has an embroidered circle-shaped red mouth to illustrate surprise].  The circle stitches forming the mouth are intriguing.

These cloth ladies have been played with and dearly cherished by some little child and are not as cumbersome as a bisque doll so little girls could carry them everywhere.


[A mask-faced doll in calico dress is described, followed by a Raggedy Ann and Belindy, and one additional Topsy Turvy.]


The presentation concludes with the following question:
Whoever said the old saying, “Two heads are better than one”?


*****﻿
This Topsy Turvy presentation and a host of other doll study DVDs are available online through the UFDC shop under the Audio Visual link. Here is the direct link to the Topsy Turvy buy page

http://wendyjanegrossman.com/2012/03/22/589/ -- This is not solely about Topsy Turvy, but I found it an interesting read.
Babyland Ragland Topsy Turvy