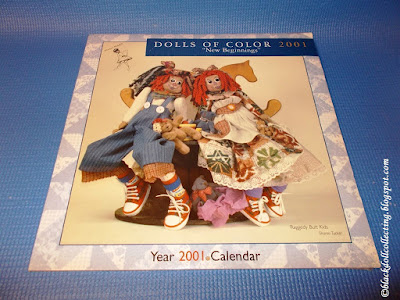 In 2003, I became aware of Sharon Tucker's Dolls of Color 2001 "New Beginnings" calendar  (shown above) which features a pair of her Raggedy Butt kids on the front cover.  It was in 2003 that Janice Larsen-Tyre became a member of my former Yahoo doll discussion group.  In her introduction post, Janice shared that her doll, Jimmy, is the January doll featured in this calendar.  Even though the calendar had been published for the year 2001, I wanted to include it with my black-doll memorabilia.  Janice made that happen for me.


The back cover of the calendar contains images of the variety of soft-sculptured and mixed media art dolls featured for the 12 months of 2001.  With the exception of the January doll and artist, the other images do not include the artists' names.  My calendar is still shrink wrapped; therefore I am unable to identify the artists of all dolls or know whether each artist provided a quote as Larsen-Tyre did.  Base on individual styles, however, I am able to recognize some of the featured artists.

January - As indicated, Janice Larsen-Tyre's doll, Jimmy is the January doll with a quote from the artist which reads:  Like a sunrise on the ocean, one of God's many gifts to us, I thank him for the inspiration & Talent to create Jimmy. The other artists that I recognize are as follows:

For years I had wanted to own one of Sharon Tucker's dolls but, until recently, never took the steps to make that happen.  She and I have been Facebook friends for quite some time, but it was just recently that I saw images of her newly created art dolls in posts by her on her timeline as well as in two Facebook groups where we share membership.  After viewing the photos of several, I chose the one that pulled at my heartstrings the most.  I have named her Sandy.

Sandy is 18-inches tall, hand painted with sculpted features.  She has black yarn hair styled in three braids hidden underneath her funky hat which matches her Bohemian chic-style clothing.  She has painted fingernails and toenails and wears platform sandals.  This one-of-a-kind doll was completely handmade by the artist.

After Sandy arrived, I was as pleased with her as I had been based on her online images.  I took several photos of my own which are shared below. 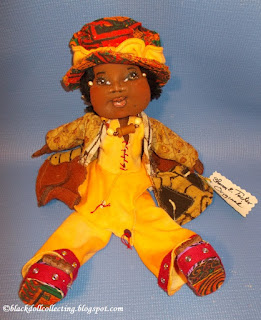 Contact her if you are interested in adding a one-of-a-kind original art doll to your doll family.  Better yet, she is hosting a Doll Making Party on August 22, 2015 where attendees can construct their own doll using materials provided in the prepaid party package.  If you reside in the Philadelphia, PA area, this might interest you.  For more information contact Sharon for specifics.