After checking two different Walmart stores on multiple occasions, I finally found and purchased the Barbie Live Love Laugh tank top. There was only one in stock at the time. 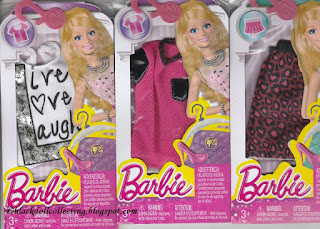 As shown in my image above, I purchased a separate pink shirt that has patent leather sleeves, pocket, and trim at neck.  A third fashion piece is a pink and black skirt.  They were $2.44 each.

There were also two different shoe accessory packs priced the same as the LLL top, which I purchased for the flat shoes they include.

*During the 13 hours spent at the ER with a family member recently, I met a delightfully precocious, overly-friendly-with-strangers, 2-year-old (going on 22) whose name is Emerald, Emmy for short. She was there for a minor head injury, but according to her, "I busted my head open in my daddy's car."  She had a visibly swollen area on her forehead, but no open wound.  Her rightfully concerned, mother brought her into the ER to have it examined.  Based on Emmy's behavior, I could tell the bump on the head did not set her back one iota.  She talked from the time she arrived until shortly before an exam room was available.  Her talking ceased only because she fell asleep around 2 a.m.  Because Emmy (who favors the little girl here) has a complexion similar to Goddess', I changed the doll's name to Goddess Emerald.