Black Dolls from Around the World - Spain Part 1 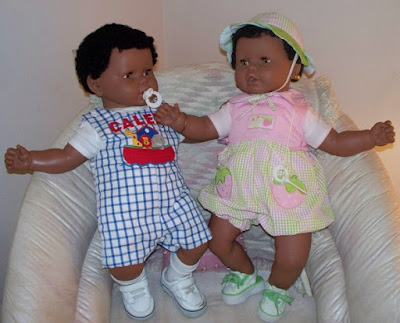 My absolute favorite baby dolls used to be MiBeBe dolls made in Spain.  These are 27-inch, vinyl and cloth dolls made there for the play market.  Their realism (size and appearance) was unmatched by American-made dolls of the same 1980s era.  They are attributed to Berjusa, which I believe is now Berenguer, but the MiBebe dolls only bear the mark:  b.b.  They have closely rooted black hair, brown sleep eyes and pacifiers with a wired crying mechanism.  However, none of the 6 that I own have ever worked. 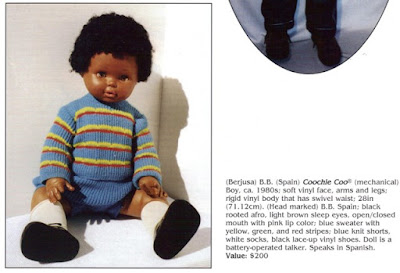 Coochie Coo/Coochy Coo/Cuchi doll (I have not been able to confirm his actual name) is another mechanical doll by Berjusa marked BB, from the 1980s, further described above (click image to enlarge).  My doll is mute. 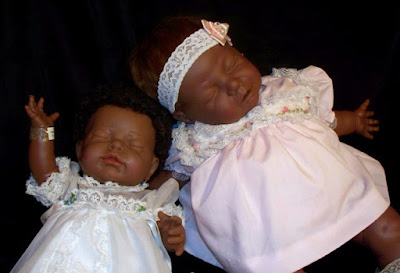 Berjusa – 16 and 21-inch, all vinyl sleepers; smaller doll’s hair rooted by manufacturer; larger doll (La Baby) was rooted by a reborn artist; originally manufactured in the 1990s.  The smaller doll may be a La Baby, too, but I not certain. 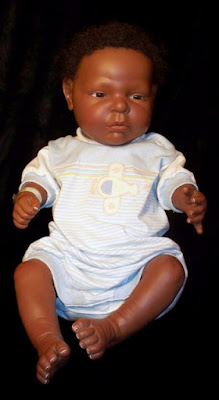 Berjusa – 21-inch, all vinyl, anatomically correct boy, originally had molded hair and no eyelashes; usually came dressed only in diaper.  His hair was rooted by a reborn artist.  Made in the 1980s.  I purchased him on the secondary market along with the smaller sleeping doll above. 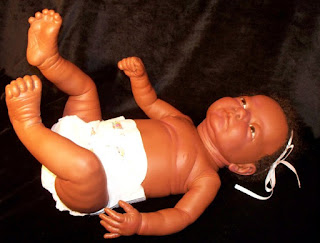 Berjusa – 21-inch, all-vinyl, anatomically correct girl, originally had molded hair and no eyelashes; rerooted by a reborn arist.  Made in the 1980s-1990s.  This doll was also purchased on the secondary market for $12 with her original box. 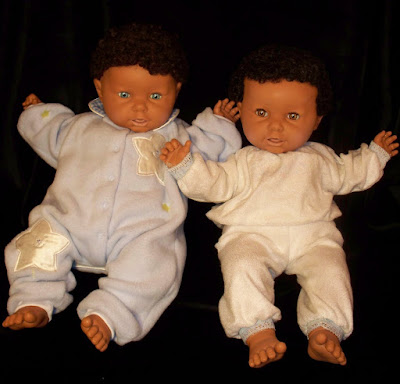 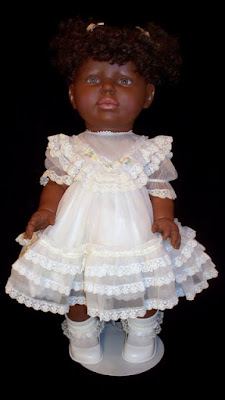 Berjusa – Tanya is a 19-inch, all vinyl, anatomically correct, chubby doll with curly brown, rooted hair and hazel eyes.  She has a certificate of authenticity (seen below) which indicates she is from 1989.  Tanya wears her original outfit.  After photographing Tanya for this blog and before returning her to her position of display, I pierced her ears. 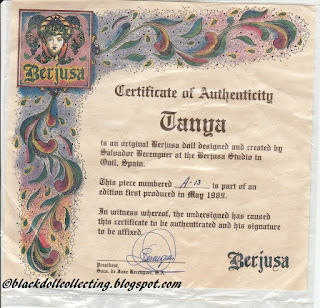 See Spain Part 2 for additional dolls made in Spain by other manufacturers.

dbg
Posted by Black Doll Enthusiast at 11:52 AM