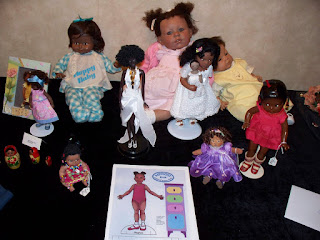 I was invited to the October meeting of the Blue Bonnet Doll Club of Dallas to conduct a black-doll presentation. The meeting was held at the Fretz Park Library in Dallas, Texas. For the discussion I wrote a PowerPoint presentation that was viewed using the facilty's LCD projector. I brought along the "cover girls" (the dolls on the front and back covers of my book, Black Dolls: A Comprehensive Guide to Celebrating, Collecting, and Experiencing the Passion.) A few other additional dolls from the various nine chapters in my 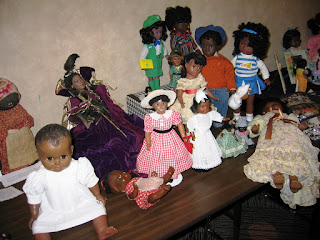 book also accompanied me to the presentation.

I requested that members of the Blue Bonnet Doll Club of Texas bring black dolls to the meeting. Many of the members complied. After my discussion, which focused on my book, I discussed the members' dolls. 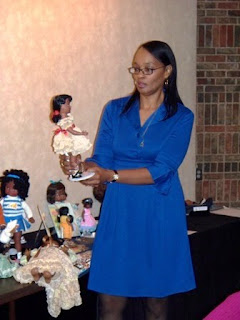 Many of their dolls were quite interesting. They included a 14-inch Madame Alexander Cynthia, made for one year only, 1951. I informed or iterated to the members that Madame Alexander made three versions of Cynthia, the 14-inch size, the 18-inch doll, and the 22-inch doll. The 22-inch doll has been described by some as standing or 23 inches, and the 14-inch doll is often described as being 15 inches. I usually refer to the doll as being 14 inches because that is the tape measure-height of my doll.

An interesting sand-filled Mason jar, bottle doll with a stitched mammy face and an 1870s doll carved of wood by Joel Ellis were brought to the meeing by Laurie McGill, the former Region 3 UFDC Director. 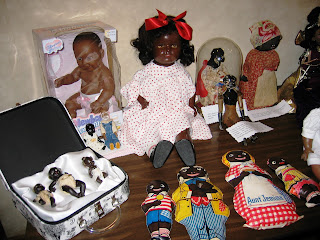 One member brought her trio of bisque babies made in Occupied Japan. These are dolls from her childhood. She shared that she carried these dolls almost everywhere she went as a child and people often gave her odd stares. She said she didn't care because her ownership and public display of black dolls was no different than a black child playing white dolls. She said it was just something about those dolls that she loved and still loves.

A modern reproduction of an Occupied Japan bisque doll with a character face was brought by another member.


The presentation was well-received by all parties. Several members provided their contact information with a request to be notified of the availability of my book. I am currently awaiting reprinted copies at which time book sales will resume.

For more information about the book, visit: https://blackdollcollecting.wixsite.com/dbg2

I would love to attend one of your presentations one day.

Whooo...Hooo.... Debbie Behan Garrett helps us celebrate on our YouTube Channel for our 1st Annual World of Black Dolls... Posted by In... 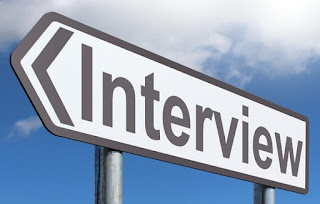