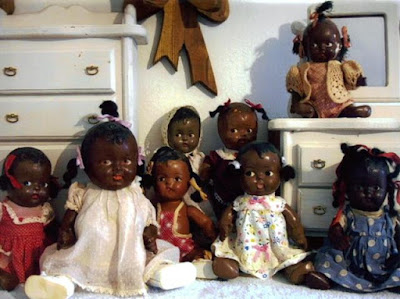 Topsy Collection courtesy of Kathy Winchester
In February 2008, I received the above photograph of various composition Topsy dolls, circa 1920s-1940s for inclusion in my second black-doll reference.  This delightful doll gathering prompted research on Topsy dolls and the addition of several to my collection.
The use of the name Topsy for dolls was inspired by the black slave child of the same name featured in Uncle Tom's Cabin or Life Among the Lowly, by Harriet Beecher Stowe.  Prior to its book form, Uncle Tom's Cabin first appeared in the antislavery newspaper, The National Era, from June 1851 to April 1852.
Chapter 20 of Uncle Tom's Cabin describes Topsy as follows:

She was one of the blackest of her race; and her round shining eyes, glittering as glass beads, moved with quick and restless glances over everything in the room. Her mouth, half open with astonishment at the wonders of the new Mas'r's parlor, displayed a white and brilliant set of teeth. Her woolly hair was braided in sundry little tails, which stuck out in every direction. The expression of her face was an odd mixture of shrewdness and cunning, over which was oddly drawn, like a kind of veil, an expression of the most doleful gravity and solemnity. She was dressed in a single filthy, ragged garment, made of bagging; and stood with her hands demurely folded before her.

From the early-to-mid 1900s, many doll companies chose the name, Topsy, for black dolls and incorporated a minimum of three braids or tufts of hair on the dolls' heads in an effort to portray the book's character. 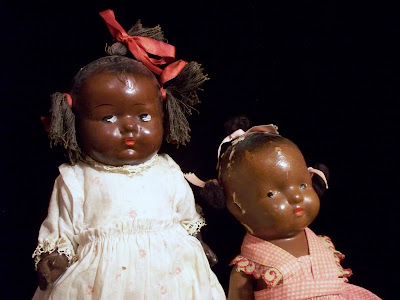 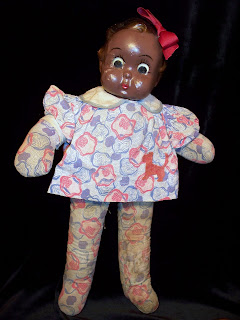 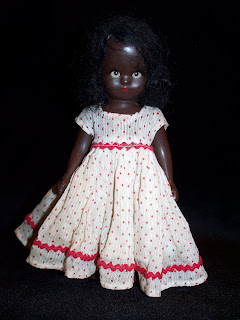 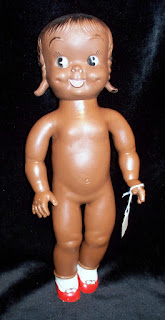 Topsy by Reliable 1950s
Chapter 20 of Uncle Tom's Cabin is devoted to Topsy and can be read in its entirety here.

Some 159 years post publication and the severely stereotypical characterization of Topsy in Uncle Tom's Cabin as unappealing, simple, and creature like, Topsy is having her say (through me).  She exerts that she was a victim of dire circumstances that most people would not have endured.  She says she was also victimized by the author's misunderstanding of human nature and her slanted ideals of beauty.