English is the only language I speak fluently.  I am proficient in medical terminology as a job requirement, but I do not speak Latin or Greek fluently.  I took two Spanish courses many moons ago during my teenage years.  Most of what I learned back in the day in handsome, straight-laced, Mr. Howard's Spanish class has long been forgotten.

My 5-year-old grandson is in a dual language program where he is taught in English for a full day and in Spanish on alternate days.  Learning a language that differs from a primary one is easier to accomplish at a young age.  It is true that babies and young children are like sponges and can grasp and retain information far better than teen-aged children.   As a teenager, I took Spanish because it was required.  It was either Spanish or French.  In my mind, Spanish was the easier A.

Grandson is not here this morning for me to solicit help in translating the phrase, "My Ernesto is on the way!"  Therefore, I used Yahoo!'s Babelfish translator for the title of this blog.  I hope Babelfish's translation is accurate.  Feel free to correct me if it is not. 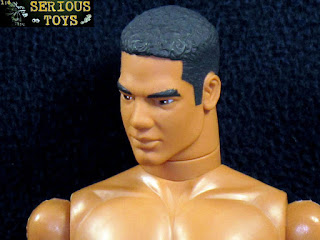 As I posted in a comment this morning to Vanessa of Fashion Dolls at Van's Doll Treasures, I conducted one final search yesterday for "Hispanic action figure" and found my Ernesto waiting for me on eBay.  With the seller's permission, two of the images used in the auction are shown above.  Described merely as Hasbro Modern US Army Hispanic Articulated Nude Figure, I asked Seller to share any additional information.  Unfortunately, other than what was included in the title and description, nothing else could be offered.

I again turned to Google.com's search engine in an attempt to glean additional information about this particular figure.  I was unable to locate him, but I did discover that in 2001 Hasbro released the first GI Joe with a Hispanic name in honor of Roy P. Benavidez, a US Medal of Honor recipient for his service and valor in 1968 during the Vietnam war.

From the newspaper image of the GI Joe created in 2001 in honor of Mr. Benavidez I cannot determine if my Ernesto (formerly visualized into existence as "a deep-tan complexioned, dark-haired, dark-eyed, handsome, muscular... action figure," is the same figure.  Based on Seller's profile (sellers "of loose one sixth scale gear and uniforms... to our customers who are kit bashers and figure customizers") Ernesto could also be a hybrid, assembled using bits and pieces of other figures.

What I do know is the history of Hasbro's first Hispanic-named action figure, that Hasbro and other manufacturers have created few other Hispanic figures, and that ¡mi Ernesto está en la manera! (My Ernesto is on the way!)

Follow my Dolls for Sale blog
Posted by Black Doll Enthusiast at 11:24 AM