After redressing Ernesto in Ken Fashionistas fashion* of blue sweater, gray corduroy pants, and blue mock lace-up shoes, I attempted to find a female companion that did not tower too much over his handsome head.  Halle, the shortest of my fashion dolls now that her head is on an Alexis (LIV) body, was my first choice.  She is slightly taller than Ernesto, and her summery PopLife Christie fashion clashes with Ernesto's winter clothes. 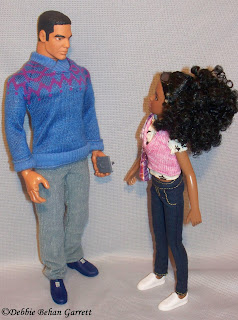 Using Calista as Ernesto's niece was my initial idea, but the following story developed after seeing the two together. (Isn't it strange how dolls seem to create their own stories and use their owners as their facilitators to tell them?)

For the past several weeks in the math class he teaches at the local middle school, Mr. Gutierrez noticed Calista's normally bubbly personality had changed to quite sullen and withdrawn.  Her classroom participation had decreased and her grades had also fallen.  Formerly an A-student, Calista's average had plummeted to a C.

Because he knew her academic potential was high, Mr. Gutierrez was determined to get to the bottom of Calista's problem.  The Friday before their Christmas break began, he asked Calista if he could speak with her after class.  Their conversation follows: 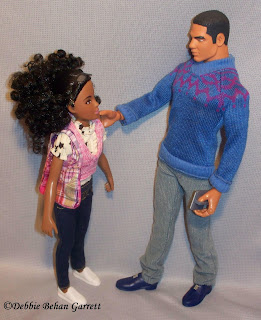 Mr. Gutierrez:  Calista, your grades have dropped tremendously and your participation in class has also declined.  Are you having problems that I or one of the female teachers or counselors can help you address?


Mr. Gutierrez:  Hates you?  Why do you think that? 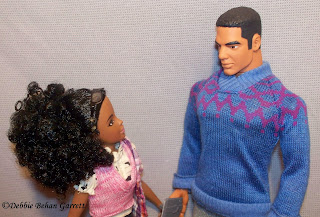 Calista:  She and I were the best of friends.  We did everything together.  She was the person I could always count on to be there for me to talk to if I had a problem, and I have always been there for her.  But that has changed now.

Calista:  She doesn't want to have anything to do with me any more since...

Mr. Gutierrez (after waiting for Calista to continue):  Since what, Calisa?  What caused Briana Joy's attitude toward you to change?

Calista:  Well, you know we entered the America's Next Top Teen Doll Model competition together and were the two finalists.  I didn't even want to enter the competition.  It was her idea that we enter it together.  But after the competition ended, she stopped speaking to me.

Mr. Gutierrez:  This seems like a relatively easy problem to solve.  Perhaps I can schedule a meeting with the three of us later today and see if I can help you work this out.

(Calista's disposition brightened.  She looked forward to rekindling her friendship with her former best friend and hoped Mr. Gutierrez could make this happen.) 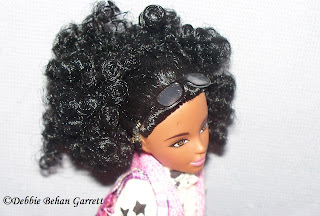 Calista:  Really, Mr. Gutierrez?  I sure hope you can help me.  It's horrible to be treated like an outcast.  Briana Joy and her new friends stop talking when I enter the room.  They roll their eyes at me when I pass by.  I have felt so awful because I didn't do anything to deserve this.

Mr. Gutierrez:  Yes, I will be happy to help you work this out.  We'll get this resolved before Christmas break begins.  I wouldn't want you to spend the holiday upset, but most importantly, I want you to resume your interest in math and your other courses.  I'm sure your grades are probably suffering in your other classes, too.


Mr. Gutierrez:  All right then.  I'm sure we can work this out.

To learn what put a wedge between Briana Joy and Calista's friendship, click here.  Then read the final passage below.  (Stop scrolling... click the link before you read the rest.) 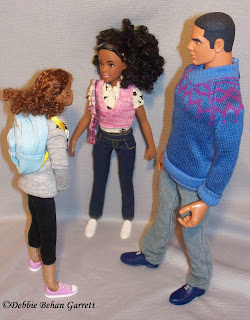 Later that same day, during the meeting between Mr. Gutierrez and the two girls, he allowed the girls to talk it out.  Calista discovered that Briana Joy thought Calista's attitude toward her was going to change because she won the ANTTDM competition. 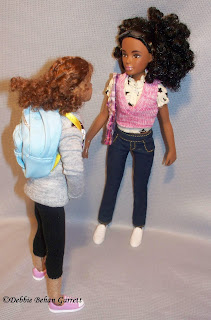 Briana Joy explained, "After you won, I thought you were going to think you were all that.  So I decided not to speak to you any more to avoid getting my feelings hurt by you.  Briana Joy confided that some of the other girls at school had encouraged her to think that way.  She now realizes they had always been jealous of her friendship with Calista and also envious of Calista's ANTTDM title.

Briana Joy apologized for assuming Calista's attitude toward her was going to change, for being so mean to her, and for allowing the other girls to influence her thinking.  She also admitted that she had been miserable without her friendship.  Hers was the only true friendship she had ever known. 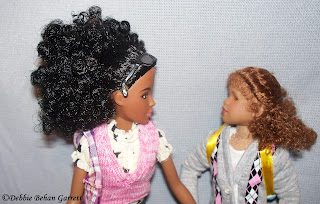 After the meeting, the two girls vowed to resume their friendship and not allow anything to ever come between them again.

Mr. Ernesto Gutierrez, much more than a handsome male specimen, is happy he was instrumental in helping the girls resolve their differences.  He encouraged them to talk to one another first if they had problems in the future or ask an adult to help.

Ernesto realizes how important it is for children to have someone in authority they can trust and in whom they can confide.  He wishes more educators, parents, and adults, in general, would remain alert to problems children face and intervene swiftly to help prevent minor crises from escalating into major ones.

*Ernesto and I realize the Ken Fashionistas sweater and pants are a little snug.  We also wanted readers to know the pants do not close completely in the back, but the hem of the sweater covers that flaw.  The shoes do fit well.
dbg

Follow my Dolls for Sale blog
Posted by Black Doll Enthusiast at 2:10 AM