When I look at dolls, sometimes I see people.  This was the case with Fireside Chatting Kenya.  In her face, I saw Teresa Graves, the actress who played the starring role in the 1974 Get Christie Love! made-for-TV movie which was later developed into a 60-minute, weekly TV series.

As noted in a previous blog post, the manufactured Get Christie Love doll has been on my mental doll wish list for years but has remained elusive.   After "seeing" Graves in Fireside Chatting Kenya, I decided to transform one of my Kenya dolls into my desired doll.

Rock Star's up swept, super curly ponytail was given the appearance of an Afro by pulling some of the curls down to frame her face and just finger fluffing it into shape (I did not remove the rubber band).


Her original earrings were replaced with gold dangle earrings that I made using gold tone discs from a pair of 99 cents earrings.


Rock Star was dressed in 2002 Barbie Fashion Avenue outfit B3366, which has a 1970s flare typical of what Christie Love would wear in her successful undercover policewoman attempts at solving crimes in the hour-long TV show.

I replaced the small handbag that came with the Barbie fashion with a larger one that was made using camel-colored craft foam. 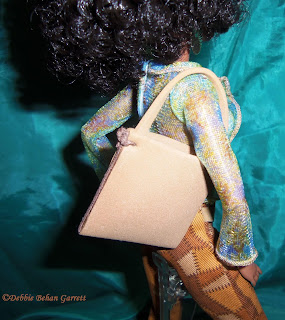 While not the original manufactured Get Christie Love doll, Rock Star Kenya shadows the character quite well and has placed my desire to own the manufactured doll to rest at last.


By the way, I am not sure how long the sale lasts, but all toys priced above $10, including Fashion Madness Kenya dolls, are now 50% off at Family Dollar stores.  I will probably buy a replacement Rock Star, since my original is now Get Christie Love!

Added 12/31/12:  More about the character, Get Christie Love, can be read here.  (Interestingly, this information is from a role playing game and anime webring.  Under Combat Skills for Christie, the writer included her large handbag used in melee attack.)