Another long sought-after doll has entered my collection as a result of a conversation I had last month with fellow doll enthusiast, Betty A.  Not only did Betty and I discuss dolls by D'Azucar Creationes, which led to my finding two of their dolls, we also discussed dolls by noted sculptor and mannequin maker John Nissen.  Nissen produced a series of dolls during the 1990s that represent children of diverse cultures.  The series was appropriately named United Children of Our World Doll Collection.

According to information provided in a past auction for one of Nissen's United Children of Our World dolls:

Although the “United Children of Our World” is John Nissen’s first doll project, he is no stranger to sculpting the human face.

In 1947 he began a long and distinguished career as a sculptor at the Royal Danish Porcelain Company, one of the finest porcelain makers in the whole of Europe.

Finding a love for the lines of the human face, in 1960 he became chief designer for Hindsgaul, the largest manufacturer in the world of window mannequins, and in 1973 he started his own mannequin company.

Today, he is one of the most sought after designers and sculptors in Europe.

The “United Children of Our World” is John Nissen’s original concept.  Each doll has been thoroughly researched and accurately represents the characteristics of the country or region portrayed.  Authentic costume designs by Else Madsen add to the beauty of these lovely creations…”


During our conversation, Betty mentioned her Nissen doll, Tala, a 27-inch doll representing a Nigerian girl.    Except for their dress and the regions of Africa they represent, Betty's Tala is identical to my first Nissen doll, Fatou.  Fatou depicts a girl from Gambia and arrived in time for me to document her in my 2008 publication, Black Dolls:  A Comprehensive Guide...

Until my most recent conversation with Betty, my saved eBay searches had included "john nissen doll" in order to be notified of new Nissen-doll listings.  As a result of this saved search, I was able to add a 14-inch Nissen boy to my collection, but he was not the one I had wanted for more than five years.

After Betty and I discussed Muhammed, my long sought-after Nissen doll, I created a new eBay saved search for "john nissen muhammed."  Because of this narrowed saved search, within a few days, eBay notified me of a listing for Muhammed.  Whattt???  I couldn't believe it.  So, right then and there, after adding the auction to my eBay watch list, I named Muhammed and claimed him as mine!  As usual, I waited until the last day and last seconds of the auction to enter my maximum bid.  I was the only bidder and won!

Muhammed arrived safely on 11/30/2012 exactly as his seller described him.


By doll artist John Nissen from the "United Children of our World" series / collection, this 27-inch tall vinyl example titled, "Muhammed."  Representing Egypt, Muhammed is in customary attire and is in beautifully maintained condition with no rubs to the vinyl.


His black wig and full eyelashes are nicely intact.  No original packaging is included with this example.  Original costume is in [excellent] condition with no rips, no tears, no stains and no odors.


The seller, bieg, also sent a copy of Muhammed's pamphlet and a very nice thank you card.

My handsome Egyptian boy and his pamphlet are shown below in photographs "bieg" permitted me to use.  An additional photograph taken by me of Muhammed and the other members of my John Nissen United Children of the World doll family follows. 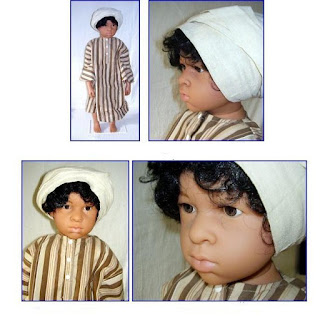 Again, thanks to my conversation with Betty, I have added three new dolls to my collection (Buba and Kolo by D'Azucar Creationes and now Muhammed by John Nissen).

Email ThisBlogThis!Share to TwitterShare to FacebookShare to Pinterest
Labels: Else Madsen, John Nissen, United Children of Our World dolls