If you were breathing in the 1970s and closely connected to the African American (then Black) community, you either knew someone who wore an Afro or you wore one yourself fashioned with your own hair or a wig.  There were girls in the community whose hair was too short to create the huge Afro popularized by civil rights activist/educator, Angela Davis.  So they opted for the next best thing, an Afro wig.  Most  were made of black synthetic fibers, but there was the occasional blonde Afro wig as well.


When Afro puffs became popular, girls created that style using their own hair and also with synthetic, attachable Afro puffs.  At around age 16, I once styled my hair in Afro puffs for a Friday night party I attended.  A male classmate refused to believe the puffs were created with my own hair and insisted that I couldn't make my hair do that until he touched it and realized he was wrong. 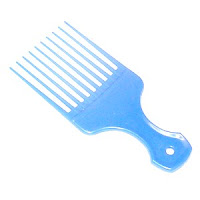 It wasn't until the mid-70s that I wore a constant Afro.  That was freedom.  All I had to do was shower and go.  The steam from the shower softened my hair enough to "pick it out" with my baby blue plastic Afro pick.  For me, Johnson's Afro Sheen Blowout Kit was not a necessity.   My freedom 'fro was a nice size as shown in the image below. 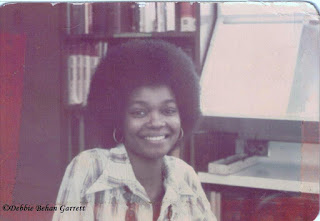 This picture was taken in the office of the radiologist with whom I worked, circa 1974.  A photography buff, after handing him a stack of reports to sign, the doctor asked me to take a seat so he could photograph me.  I complied.  After working with him and his partner for two years, I  was offered another position by one of their colleagues, a local pathologist.  The pay was more lucrative.  So I resigned the old and accepted the new position.  A few days before my final day, the radiologist handed me a dictation belt (pre-cassette tape era) to transcribe what I thought was x-ray report dictation.  Instead, it was an unrequested letter of recommendation.   I still have the original and the carbon copies of that letter that I never needed to use.  A man of few words, this was a nice gesture of his appreciation.  I was quite saddened upon discovering his death a few years after leaving the hospital's employe.

While sitting at my work desk in my home office/doll room the other day, I glanced at Barbie Basics Model 04 who stands atop my desk.  She was still as seen a few weeks ago in my Ebonilicious post wearing a borrowed Afro wig.  Her loosely connected curls gave me the urge to grab my plastic-bristle doll bush to manually blowout her curls into a well-formed Angela Davis-style 'fro.

Here's a link to a close-up image of how her Afro looked before the blowout.  Below is how Model 04 looks now.


Hers is the Afro of my youth.  The one African American women proudly wore back in the day in varying lengths to embrace their natural essence, and back then, the bigger, the better by any means necessary.