After searching this blog for a prior post on the Nelson R. Mandela Talking Action Figure and finding none, I stopped on this final day of Black History Month to share.


Prior to purchasing my own Nelson R. Mandela figure, the following details about it were included in chapter 6 on page 329 of my book, Black Dolls:  A Comprehensive Guide to Celebrating, Collecting, and Experiencing the Passion (2008): 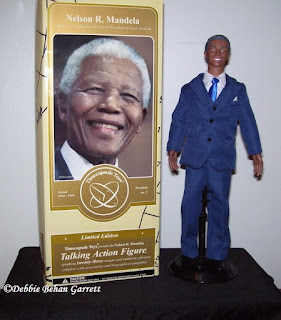 While writing my third book, published in 2010, I acquired my own Nelson R. Mandela and through me, he wrote the following entry on page 115 of The Doll Blogs:  When Dolls Speak, I Listen: 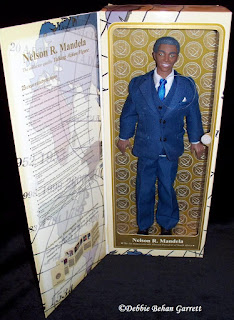 I finally arrived to Texas today along with two additional dolls.  Debbie ordered me at least two months ago from an Amazon.com seller, who obviously had some difficulty fulfilling the order.  She plans to keep me in my box, but would like to hear the 23 unique phrases I am supposed to speak in the voice of the real person I represent, Nelson R. Mandela, the first democratically-elected president of South Africa, who served from 1994 through 1999.  It is a mystery to Debbie why Time Capsule Toys, Inc. made my eyes blue.  The type of batteries that I require is also a mystery.   The current batteries are obviously dead because I remain mute when Debbie presses my chest in an attempt to hear me speak.


The Nelson R. Mandela figure also includes a biographical pamphlet covering the president's life before and during his service as the first democratically-elected President of South Africa with the inclusion of biographical facts and rare photographs.


I have yet to hear Mandela speak, but I disrobed him this morning and removed his three dead 357/303 Energizer batteries.  I plan to replace these with working batteries soon as I am still eager to hear his up to four minutes of audio, the text of  which is included on the inside flap of the box.  His first and last statements are shown as:

Please visit and "Like" The Doll Blogs: When Dolls Speak I Listen
Posted by Black Doll Enthusiast at 5:56 AM