Based on old photos viewed recently of my grandson's first private birthday party that was at our home in 2002, that is the year I purchased the Wanna-Be dolls from the author of Black Dolls an Identification and Value Guide 1820-1991, Myla Perkins.  In the photos of Grandson's party, he is seated at the kitchen table in his booster chair opening gifts and later eating cake.  Visible in some of the photos are two of the Wanna-Be doll boxes.  They had probably recently arrived and had been placed against the back wall of the kitchen before eventually being taken to the doll room.

After another collector informed me that Perkins was selling some of her dolls (many of which were duplicates for her, many of which had been featured in her book), I contacted the author and requested a copy of her dolls for sale list. Among others, I purchased four Wanna-Be dolls. They are described in her book and illustrated as shown in the photograph above.

The Wanna-Be dolls are career-inspiring playthings created by the corporation of the same name with a copyright year of 1986.  They are 17 inches tall with vinyl heads, cloth bodies, vinyl arms and legs.  They have brown sleep eyes and rooted hair.  Dolls in the series included male and female pilots, doctors, teachers, executives, firefighters, soldiers, a male football player and female cheerleader.


After their migration to the doll room some 13 years ago, the four I purchased from Perkins, shown above were in the same corner as Giggles and Baby Catch-A-Ball.  I was well aware of the Wanna-Bes' location because they were in front Giggles and a few others that were lined against the wall. I have enjoyed the dolls in their never-removed-from-box states and kept them solely because they were purchased from Perkins.  To create much needed space, I have now decided to find new homes for all four.

Additional photos are shown below:


Photos of the graphics and text from their boxes are shown below: 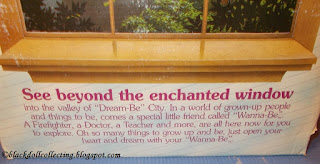 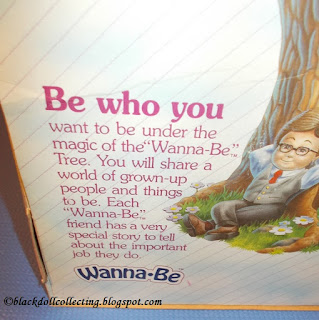 By way of their separate eBay listings, I am hoping that finding new homes will take place relatively fast for these very well-made, career path-inspiring dolls, which are rare to find in African American/Black form.  My current listings can be viewed here.