Dave is not a newly-arrived doll. After discovering I had not documented his January 2010 purchase in photos, his first photo shoot took place yesterday.  Those photos are the purpose of this blog.

Dave's 2010 cost of $32, his retail value, and other pertinent information were entered on row 11 of the 2010 page of my doll inventory Excel workbook, as shown below in a filtered screen snapshot:

As indicated under the description column, Dave an articulated action figure/doll dressed in full official Cub Scout uniform.  The height was recorded as 9 inches; however, he is probably closer to 8-1/2 inches than 9.  The colorful box graphics include images of Dave on the front and back of the front-side flap, on both side panels, and on the back.


I appreciate the individuality Kenner created for each scout and cub in this series.  Certainly using the same names for the scouts and same names for the cubs would have defrayed costs. In addition to their own unique names, each figure's name is printed on its box.  That required additional cost to the company as well.  What was customary for doll companies to provide in the past is a rarity in today's market. 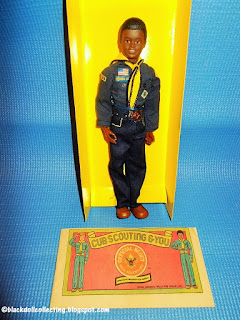 After removing Dave from the box (still attached to the box liner), I discovered his 16-page Cub Scouting & You booklet printed on newsprint.   I took photos of the booklet cover and four of the pages.  (Click or stretch, if necessary, for a better view of these below.)

Before returning the booklet and Dave to his box, Bob Scout paid him a brief visit wherein the two engaged in the following brief dialogue.