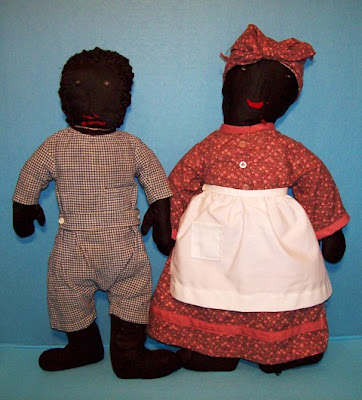 Black cloth dolls are among the first original one-of-a-kind dolls.  This is particularly true of those crafted in the homes of the young and old, usually handsewn with love, using recycled fabrics and other textiles.

The above pair of dolls was given to me in 2005 by Elizabeth S. Darrah, having been made by her great grandmother, Frances "Fanny" Skinner Henry, who was born in 1849.  According to Ms. Darrah, "Members of the Skinner Henry family were active abolistionists."    The male has looped yarn hair.  Both have button eyes, noses made of rectangular pieces of silk fabric,  embroidered mouths, and silk used for their cloth exteriors.  The male's clothing is all original.  The female wears newer clothing (circa 1950s) over her original flannel undergarment.

Along with the multitude of handmade black dolls, manufactured dolls were also made during the 19th Century.  These include dolls printed on cloth that were later handsewn in homes. 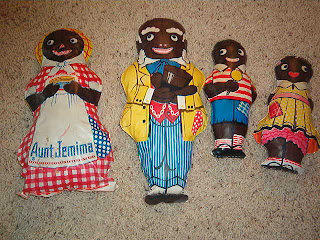 The Aunt Jemima Mills Co. offered the Aunt Jemima doll family as a product premium as early as 1910 and as late as 1949.  Consumers could send in box tops from Aunt Jemima pancake mix along with a few cents or stamps in exchange for the Jemima family dolls that were ready to be stuffed and sewn closed.  This family of four originated as dolls printed on oil cloth and include Mose, Aunt Jemima, Wade and Diana (referred to as pickaninnies in an Aunt Jemima doll ad).  The 1949 version was made of plastic. 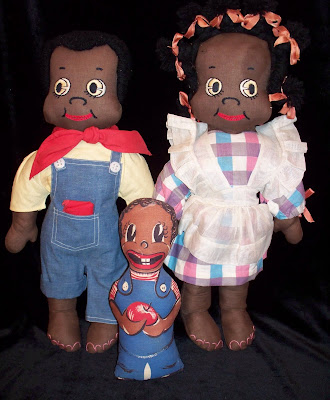 Other early manufactured black cloth dolls and doll patterns were often stereotypical caricatures with exaggerated facial features.  Examples include Black Mammy and Child by Spring Mills Co. (1940s) printed on cloth to cut and sew, "Piccaninny" girl and boy dolls made from Simplicity Pattern #7329, and  Little Brown Koko (1940s) depicting the character from the book of the same name. 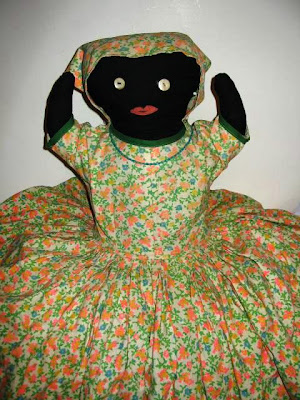 An abundance of cloth mammies, both manufactured and handmade, are among the initial American-made black cloth dolls.  These also included mammy appliance covers.

No longer piccaninnies, in today's doll market, black cloth dolls have evolved from mammies to elegant goddesses and divas.  Modern cloth dolls will be discussed in a subsequent post.

*Pickaninny (also picaninny, piccaninny or pickinniny) is a racial slur which refers to a depiction of dark-skinned children of African descent. It is a racist and derogatory caricature, whose meaning and usage grew to fruition in the antebellum American south, where slavery was legal. [https://en.wikipedia.org/wiki/Pickaninny]  It is a term that should have never been used to describe a person, let alone an innocent child.