This interesting circa 1950s doll, presumed to have been made by the person whose handwritten signature is on the bottom of both shoes, was the first doll to arrive in 2017.  She stands 19-inches tall and has a papier-mache head; cloth arms, body, and legs.

Her distinct facial features include hand painted eyes, broad nose, full lips, and open nostrils.  The seller described her wig as being made of horse hair with visible hide. 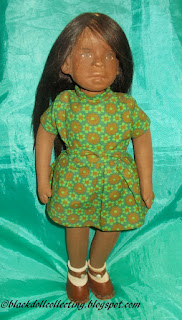 She is dressed in heavyweight cotton floral-print dress with fabric-belted waist.  The dress appears to have been hand made just for her. 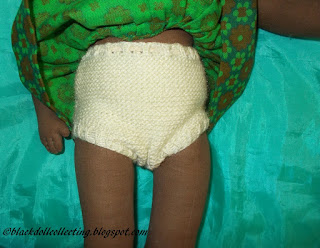 She wears white hand-knit undies and white nylon socks that I hand washed. 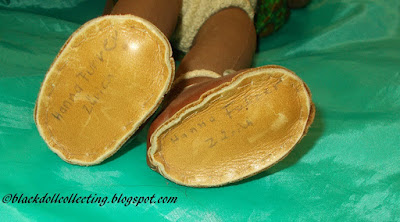 The all-leather, hand-stitched brown shoes have a pearlized button closure on the front of the ankle straps. The bottom of the shoes are each signed "Hanna Fuhrer, Zürich."  Reminiscent initially to me of a Sasha Morgenthaler Studio Doll, but with broader facial features, I was intrigued upon first seeing the doll online and desired her presence in my collection.  Morgenthaler was also an artist from Switzerland.


After her arrival and studying her facial features and overall construct, I came to the conclusion that this doll reminds me more of a Wendy Frank doll than a Morgenthaler Studio Doll.  My doll, however, was made long before Frank began making dolls.  Perhaps Frank was inspired by this artist and decided to fashion her dolls after a Fuhrer doll.  Frank's dolls have mask faces with several layers of paint applied, which gives the appearance of papier-mache. The hands of both artists' dolls are similarly stitched.   Frank's dolls have stitched toes, whereas the Fuhrer doll's feet are toeless (see next image).  As illustrated in the comparison photo, the facial similarities are too close for there not to have been a Fuhrer influence upon Frank's work, but perhaps the similarity is coincidental.


Because I found the exposed animal hide a bit unnerving, shortly after her arrival, I made Hanna (I have named her after the artist) a knit hat using an infant-size sock.  Photos of the cap-making process follow:

I drew a flower onto card stock, cut it out, decoupaged it using Mod Podge, and glued the flower to a piece of brown felt.  The edges of the felt were trimmed to create a border for the flower.  Finally, the flower with attached felt was glued to the left side of the cap. 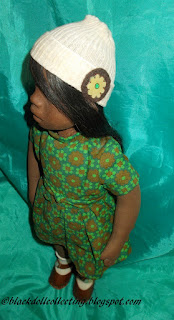 I think I love her.  No, I know I do.  She has a very solemn face and appears to be in deep thought.  I would like information about the artist and the exact time frame the doll was made (she could be from the '60s or as late as the 1970s).  Unfortunately, googling the name, "Hanna Furher" was unfruitful.