Black Dolls From Around the World - Africa

Black dolls are universal and loved around the world.  Since I was unable to include black dolls from other countries or continents in my Moments in Black Doll History blog entries in February, I will do that this month intermixed with other black-doll musings.

This post is dedicated to dolls from various regions of the continent of Africa. Typically, dolls from Africa are not considered playthings. They are used there for rituals and educational purposes. I have incorporated a few dolls from Africa into my collection.  I know a few fellow doll enthusiasts who have done the same. 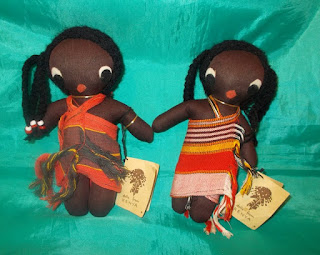 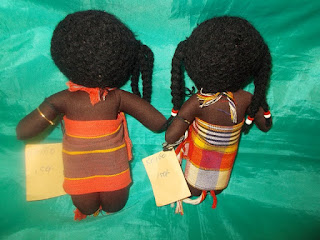 Dolls from Kenya is the name of the Kenyan company that produced this pair of 7-1/2 inch cloth dolls, circa 1990s or earlier. They have felt eyes and mouths, wear clothing made of authentic Kenyan fabric with gold tone string necklaces and arm bracelets. Black yarn was used for their hair, the ends of which are braided with beads on the ends. One has two ponytails with beads; the other has one side braided ponytail.  They each have a hang tag, shown next: 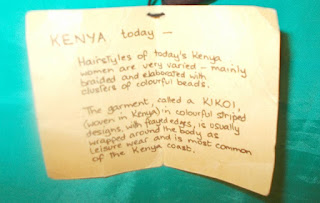 The inside of which reads:
KENYA today –
Hairstyles of today’s Kenya women are very varied – mainly braided and elaborated with clusters of colourful beads.

The garment, called a KIKOI, (women in Kenya) in colourful striped designs, with frayed edges, is usually wrapped around the body as leisure wear and is most common of the Kenya coast. 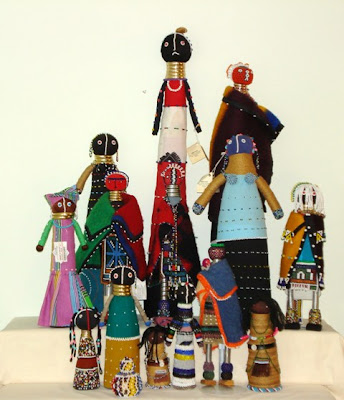 A variety of Ndebele dolls made in South Africa by members of the Ndebele Tribe, photograph courtesy of Bonnie Lewis 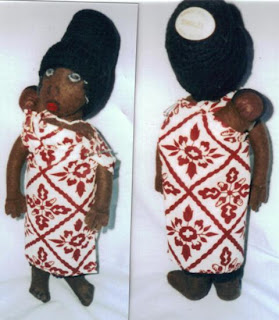 Swazi doll with baby (front and back views), photograph courtesy of Ruth Manning

The above Swazi doll and baby is made of brown felt and wears an authentic African dress typical of that worn by the Swazi people of south-east South Africa. 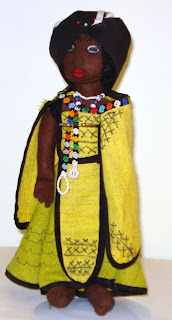 Similar to the Swazi doll and baby, the Xhosa doll above is also made of brown felt and likewise has painted facial features.  It is representative of and made by the Transkei people who primarily live in the Eastern Cape area of South Africa.  Transkei means, the area beyond the Kei River. 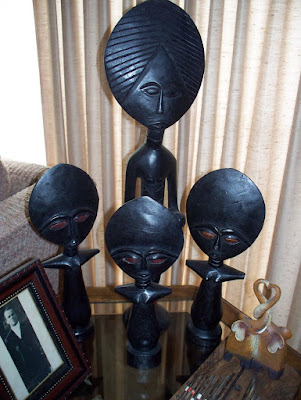 The Ghanaian Woman with Baby doll is made of cloth over cardboard-like foam.  Baby is inside a pouch on woman's back.  Both have hand painted features.  Imprinted on the back of baby's pouch are the words:  HARMONIE de Woodin.  The doll was made in Ghana, imported to the US by Jokae's African American Books+, Dallas, Texas. 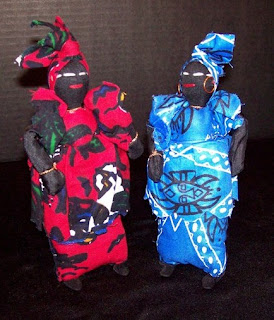 ~~~~~~~~~~
These are just a few dolls made in Africa.  According to Elisabeth L. Cameron and Doran H. Ross in Isn't S/he a Doll? Play and Ritual in African Sculpture, page 11 (1996 Regents of the University of California),

"While the average parent views these figures as relatively inconsequential objects, it is becoming increasingly clear to social scientists that they can be active in establishing value systems and constructing identities." 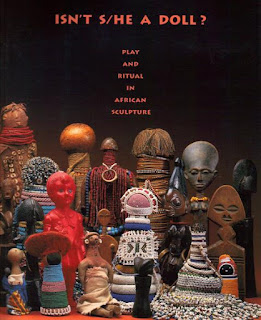 A thorough exploration of African dolls is covered in Cameron's book, the cover of which is pictured above.

Do you have dolls and/or images of dolls made in Africa that differ from these?
dbg
Posted by Black Doll Enthusiast at 6:10 AM