Among other things, Pabboo G. Redfeather is an artist and doll collector extraordinaire. He has founded several Facebook doll discussion groups, most of which have a focus on fashion dolls or Barbie specifically. I am a member of his Black Barbie First Collector Club on Facebook. This year he created a limited-edition tribute package to the 40th Anniversary Black Barbie, which includes his artwork of paper dolls and the custom-made fabric used for the Barbie club dress he made. I received one of the packages from Pabboo recently, the contents of which are described below.


The contents of the tribute to Black Barbie's 40th anniversary include:


The dress, which uses special-ordered fabric with Pabboo's artwork, has red ribbon trim at the neck and waist. A red ribbon flower is at the center of the waist.

The skirt of the dress continues the pattern of headshots of Black Barbie drawn by Pabboo. The phrases, "1st Black Barbie Club 1980 Pabboo," and "Black Barbie 40th Anniversary" are printed throughout the fabric. 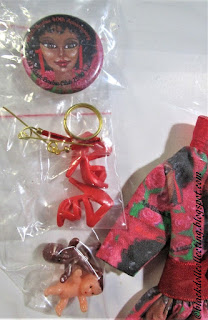 This package contains the club pin, accessories for Barbie, and miniature dolls.


The club dress is designed to fit the first Black Barbie, but I have not decided if I will redress a doll wearing it. The true collector in me feels I need a duplicate dress so I can keep this package intact.

Thank you, Pabboo. Your artwork and the entire package presentation are beautiful!