Making Lemonade from a Lemon

"When I first saw her... [it] looked like she was swarmed by ants." —Vicky Hoff Forbes
The above quote from another collector who has the same doll by Heidi Ott is the perfect way to describe the way my new-to-me 19-inch doll looked upon opening the shipping box. The doll was covered with black specks of what remained of the disintegrated black wig.
The seller had described the "disintegration" in the item description, but the auction photos only showed a few specks of hair fibers on the side of the doll's face and some on one of the extremities. That is not what I experienced upon opening the doll's box. I am sure all of what I saw was caused by the doll being jostled around during the shipping process, but I was horrified! Do you hear me? Hor-ri-fied!
I stopped everything and put on a pair of disposable gloves and a face mask.
Next, the following photos were taken before cleaning up the hairy mess. (I vacuumed the inside of the shipping box before it was discarded and vacuumed as much of the particles from the doll and the clothes as possible.) 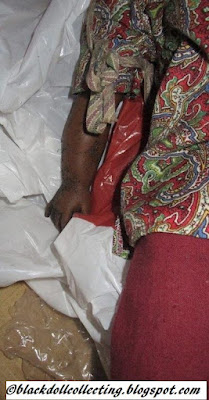 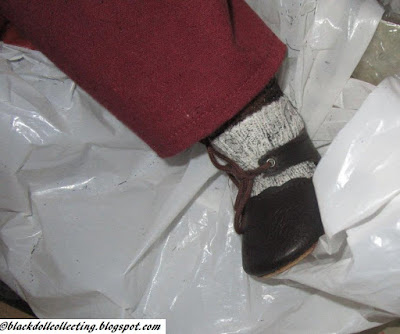 After the doll's clothes were removed, I vacuumed the doll, the clothes, the inside of the shipping box, and the area where the shipping box was opened.
I have always loved the quality and sculpts of Heidi Ott's made-in-Switzerland dolls. I own several others. After first seeing photos of Vicky's doll (in the restored state) some seven years ago, I fell in love with the authenticity of the head sculpt and wanted one in my collection. I was so enthused over her doll, that I don't recall reading her description of the doll's condition when she purchased it. I now own a doll exactly like Vicky's including the original disintegrated wig issue. I wasn't expecting to have to make lemonade from the unexpected lemon I received, but I had no other feasible choice.
Before proceeding any further, I contacted the seller to voice my utter displeasure about the doll along with photo proof of the doll's condition. The seller wrote back, not with an apology initially, but with a defensive reply stating that the disintegration was described, that it was the reason the doll was wrapped in a plastic bag (more accurately, a plastic bag was wrapped around the doll), the reason the auction had a low beginning bid, and that her now-deceased mother-in-law (MIL), who was the original owner, paid $400 for it. This did not soothe my frustration, so I replied, agreeing that the wig disintegration was mentioned, but not to the full extent. I described all the things I had gone through thus far to begin the clean-up and restoration process. I further informed the seller that had I known the doll's true condition, I would never have placed a bid as high or would not have bid at all. The seller mellowed some and replied with an apology, which I accepted. We communicated a few additional times about her MIL's collection and her new understanding of people who collect dolls. She shared that her husband's ex-wife kept the doll's baby brother in remembrance of her MIL. We ended our communication by wishing each other an enjoyable weekend. I knew what my weekend would entail—arduous work in improving this doll's condition and overall appearance.
What Was Done Next

I used two bags of Senegalese twist braiding hair to make a wig, but first I created a head covering to feed the twisted strands through.
The New Wig

Next, I scanned the doll room and found an 8-inch vinyl baby whose head is marked 1987 Spectra. The baby fits in the sling perfectly. I have an identical baby that has a browner complexion that I will probably use instead of the one illustrated next.
About This Doll
When I made my first attempts to locate a doll like this, I was under the impression that she and her 19-inch tall brother represented Jamaican children. "Jamaican" is how some online sellers referred to the dolls. In the accompanying 1988 catalog, they are described as African as evidenced by the following descriptive statement. "The head is made of unbreakable material which can be washed with soap. The hair is 100% human hair except for the african dolls." (African was spelled with a lowercase "a.") Whatever synthetic fibers were used (designed to mimic the texture of coarse hair) they did not withstand the test of time.
The actual names of the dolls in the catalog are not revealed by Ott, who explained, "Naturally, all my dolls have their own names, but unfortunately, they have to remain a secret. The reason being is that many firms in countries all around the world have registered almost all [childrens'] names in existence, therefore I wish to avoid any legal action involving copyright." (Obviously, in later years, Heidi changed this stance and began sharing her dolls' names.)
The catalog page on which the African girl, her brother, and two babies appear only provides their catalog numbers and heights in centimeters.
In addition to the 1988 catalog, my doll has the original hangtag and certificate signed by Heidi Ott.


There are countless items to collect and write about. Black dolls chose me.
__________
Thank you for reading. Comments that are not spam are appreciated. Spam comments will not be published, so don't waste your time. To contact me directly regarding dolls or any of my posts, please use the contact form on the right of the home page, which is visible in "web view." A link to web viewing should be visible at the bottom of this page.

Check out what I am selling here.
Check out my eBay listings here.
Please follow my sister blog Ebony-Essence of Dolls in Black.
*New*Visit/Follow DeeBeeGee's Virtual Black Doll Museum
Donate here to support this blog. Thank you!
Posted by Black Doll Enthusiast at 12:00 AM

Oh My! I read and enjoyed entirety.She turned out beautifully after your arduousness and TLC. Great Job Dolly ❤

Thank you for reading the details of this ordeal, Dolls by MonTQ. I am very pleased with the results.

It's good to hear from you. Are you still making dolls?

Viel Freude mit dieser Puppe wuenscht Ihnen---Heidi Ott is one complete sentence, meaning 'Heidi Ott wishes you a lot of fun with this doll.' (The name is placed at the end for emphasis, like a signature.) And yes, she's gorgeous. Glad you managed to give her a new lease on life. :)