An Arm for a Doll

In a previous post, I shared an image of the near identical arm that my husband sculpted for my one-armed mama doll.

In the sculpting process, he used two different batches of polymer clay with pieces layered over others -- new over old or old over new.  Unfortunately, the two would not form a bond.  Several cracks or breaks in the polymer developed and could not be smoothed out.  In addition to the cracks, because of the layering, the arm had become heavy and unfortunately could not be used as a replacement for my doll.

Husband suggested that I try to find a replacement arm on eBay before he sculpts another using one batch of clay.  One step ahead of him, I had already searched eBay and saved two searches to be notified of future listings of "composition doll arm" and "composition doll parts."


Fortunately, I kept the arm mold I created using Saran Wrap and paper tape.  I decided to go forward with the plan to stuff and paper mache this partial mold.

I used aluminum foil to create an armature and wrapped it with several layers of Polyfil stuffing to achieve the proper width and length of the inner arm.  This armature was placed inside the Saran wrap/paper tape mold.

I then taped the cut edges of the undersurface of the arm closed using paper tape.  The entire arm was wrapped several times with additional paper tape to add firmness.


Next, I cut several 1- to 3-inch strips of newspaper and used a no-cook paper mache recipe to apply the strips to the arm.  This brought back pleasant memories of my first paper mache project in elementary art class (3rd grade, I think).

Each strip was dipped in the paper mache mixture before wrapping around the arm in a circular pattern.   I completed the upper arm first and propped the lower portion inside a small glass container for air drying before the lower arm and hand were paper mached.  I applied a total of three layers of paper mache, allowing each layer to dry for several hours before applying the next.  This process took three days.  When not in use, the paper mache mixture was stored in a covered container in the refrigerator.


Two layers of Mod Podge were added to seal the paper mache and to give the arm added firmness.


I purchased a mountable wall hook to connect the arm to the body.  A slit in the undersurface of the upper arm accommodates the hook. 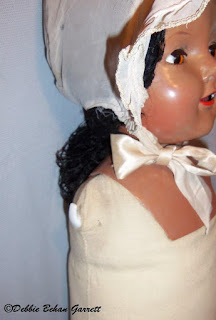 Lynn's body already had a small opening where the previous connector had been, so I slid the circular portion of the wall hook inside the opening to test whether it would serve the intended purpose.  I left  the adhesive backing on the base of the hook covered.  I'll remove the backing later, but maybe not because I want the arm to have movement.

The final step of painting the arm has been completed.  Since the fingers were molded as one unit, I had my husband draw them before I primitively outlined them too heavily with paint, which distorted his drawing.  So I painted over the fingers, redrew them myself, and outlined them a final time.  They are not perfect, but will serve Lynn's purpose. (I thought about cutting the fingers out after the paper mache hardened, but decided drawing them was an okay option.)

Lynn now has two arms of the same color.  She took one final photograph with Jane before both were placed in another area of the doll room.


Next up will be new wigs for both dolls.  Jane's is sparse and refuses to reset into Shirley Temple curls (I have made two failed attempts).  Lynn's original wig sheds if you look at it too hard.