Jem and the Holograms Shana Elmsford

From 1998 through 2001, I sold dolls and accessories on eBay for a woman from the East Coast.  Some of the dolls and accessories included her massive Jem and the Holograms collection of dolls, fashions, and accessories.  She had multiples of each.  These were among other, then, highly collectible antique, vintage, and modern dolls of all types that she bought and sold for profit.

I "met" this woman through a doll purchase and actually became more acquainted with her after receiving a subsequent handwritten list of other dolls she was selling.  She did not own a computer.  I was already buying more than selling on eBay at the time and was familiar with that market.  I knew her dolls would sell.  This was during eBay's infancy, at a time when collectors were eager to replace dolls and other relics of their youth and money was usually not an issue in that more stable economy.  The hunger for past playthings with fewer sellers offering the same items created the lucrative eBay seller's market of the late 1990s early 2000s.

After I explained the eBay process to this woman, we developed a partnership where I sold her dolls on eBay for a small percentage of the sale.  The business was quite profitable, but it became extremely time consuming for me.  My selling items on eBay for her was her effortless "job," but lots of work for me to scan the photographs she mailed me, create the listings, write the descriptions, and coordinate the end-of-auction sales.

After the birth of my first grandson in 2001, my time between a full-time (albeit working from home) job and caring for him while my daughter worked, left little free time to sell on eBay or a desire to do it; so I gave it up.  She was not a happy camper, but I had given her enough warning before his birth by urging her on multiple occasions to purchase a computer.  (___, you need to buy a computer and sell your own stuff).  Not being computer savvy was her excuse, but eventually she was forced to do it and hopefully realized it as a blessing.

I still have some of the photographs of the Jem dolls and others I sold for top dollar on eBay back then. The Jem items are illustrated in the following six collages.

Jem and the Holograms accessories that I sold in the past included fashions, coloring books, playsets, cassette tapes, view master reels, wrist watches, and ball point pens.  Some of these with the exception of the ball point pens, are illustrated in the next four images: 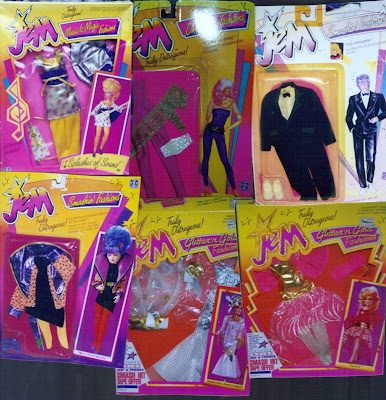 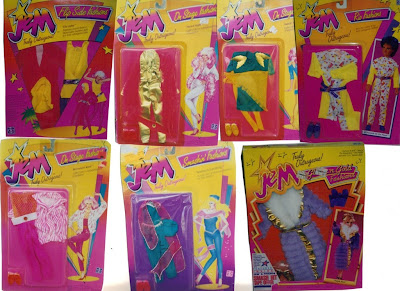 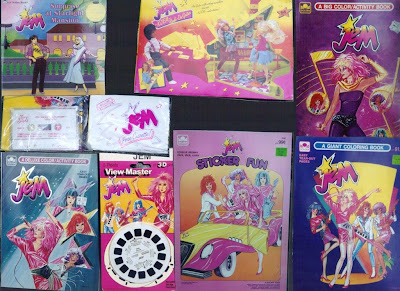 I recalled this part of my eBay seller life this morning after browsing an Integrity Toys sale at Toonaroona.com, which includes Integrity Toys' version of Shana.  Reading Shana Elmsford's bio further stirred my Jem and the Holograms seller's memory:


I do not own IT's Shana, but I do own the original Shana and Krissie of the Starlight Girls, made by Hasbro in 1985 and 1987, respectively (shown above).  Shana was not acquired from the East Coast doll dealer, but Krissie was.

Please visit and "Like" The Doll Blogs: When Dolls Speak I Listen
Posted by Black Doll Enthusiast at 10:59 AM

Email ThisBlogThis!Share to TwitterShare to FacebookShare to Pinterest
Labels: Jem and the Holograms Shana, Krissie, toonaroona.com

Very interesting back story. I missed the whole Jem and the Holograms phenomenon but I did get Jem's car on eBay. Very cool! Never knew there was a black member of the group.

Thanks for sharing the Jem and friends photos. That was some lucky little girl - Jem ownership-wise ;-)

When the Jem dolls went on clearance, I bought some, but alas, I never found a Shana. (I had Aja of the Holograms; Pizazz, Roxy, and Stormer of the Misfits. Wish I had bought the Rockin' Roadster, but on sale, it cost more than I could spare at that time. Years later, I bought Krissie and Banee from that Hasbro Jem series - on eBay and for more than I would have back in the late 1980s. Sigh.

Congrats on your Hasbro Shana and Krissie ;-)

When all quantities of an item sold, I discarded the picture, but I think I sold a Jem car or two. She had multiples of the dolls and other items shown, which were sold in several different listings.

I had no prior knowledge of Shana or Krissie before selling the Jem items. After seeing her picture, I immediately accepted Krissie in exchange for selling commission. I did not care for Shana's hair color and didn't want her initially because of it.

These Jem items made several adult collectors happy. They were not sold to one person.

You have a nice variety of Holograms and Misfits.

I sold multiples of Aja, Pizazz, and Stormer on ebay which is the reason I no longer have their pictures. Asley, Starlight Girl, sold before Banee and Krissie, but there were fewer of this trio to sell and I took one of the available Krissies.

Calling first dibs on the dolls being sold was a perk for me. Countless times I'd ask, "What's my price?" when a doll interested me. Ideal's AA Tressy is one of my what's -my-price dolls.

I completely missed the Jem and the Hologram era. I do know they are quite popular, even today. I didn't know there was a sister in the group, either. Learn something new everyday. Thanks.

I was a HUGE Jem fan! I used to get up early every morning so I could record the show live and cut out the commercials. I still have that VHS tape and a cassette of music I ripped from the show. Too bad I wasn't into dolls then because I had no idea that this merchandise was even produced.

Yep... we were included in the Jem and the Holograms cartoon series and dolls.

Shana's hair color always threw me off, though.

I think my daughter might have watched the Jem and the Holograms cartoon series... might. I vaguely remember it airing on Saturday mornings but I never watched. She never had any of the dolls. Like you, I wasn't aware of their merchandise until the late 1990s.

Wow, firstly that woman sounds like a lazy cow (sorry...) and I'm hoping she eventually decided to upskill her lazy bones...funnily I was just playing with my Shana as I was a little disappointed in the photo I shared with you that she wasn't holding her guitar in the photo I sent through and finally I dug it out of my Jem & The Holograms collection. I was just thinking back to a time when the toy aisle was filled with The Holograms!! That pile of boxed fashions especially brought back some memories! I used to wander up and down the Jem section wanting those dolls do bad (I wasn't allowed Fashion dolls at this stage of life). I even entered a colouring completion trying to win a Rock n Curl doll. Eventually with one of my first pay packets I bought her (and a Doctor Barbie) and hid her under my bed. My brother had a field day threatening to tell my yolks I'd brought a doll home. Eventually I told them, and they were tolerant enough that I ended up with a number of the fashions if not any other doll...I have since collected so, the Jem/Jerrica dolls, Pizzazz & Shana and from a whole lot of lots built up a small collection...but you're right a Jem is hugely collectible and still commands top dollar for MIB examples (actually even lose nude dolls can be expensive, the fashions even more so. I'm glad you kept a couple, even if your time dealing with the range wasn't entirely awesome!! :)

I didn't miss your Shana's guitar because my Shana doesn't have one! I guess I should buy one for her, even if it's not an original. Your Jem collection sounds fabulous!

You did the right thing by telling your parents about Rock 'n Curl and Dr. Barbie. Little Brother could no longer threaten to tell.

I never heard from that woman again after I stopped selling for her and she finally paid me in dolls the final money she owed. What started out as fun, turned into a lot of work. We live and we learn, and one thing I learned from that experience is that people can use you for their benefit only if you allow it. 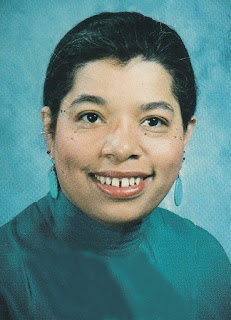