Keisha as Cleopatra, the doll shown above right, has been part of my personal doll collection since the late 1990s/early 2000s.  She was part of the Third World Doll Collection by the Keisha Doll Company and appeared in the 1991 catalog.  Keisha as Cleopatra is a 23-inch, all-vinyl doll with black crimped wig and brown sleep eyes.  Her Cleopatra costume includes gold lamé romper and matching sandals.  I added the gold tone head pendant and hair accents as well as the gold tone band bracelets.

Owned, but sold during the early 1990s, was Keisha as Makeda Queen of Sheba.  I have always wanted at least one additional Keisha doll to replace Makeda.   After finding Ashanti Keisha on eBay recently (the doll shown on the left above), that desire has now been fulfilled. 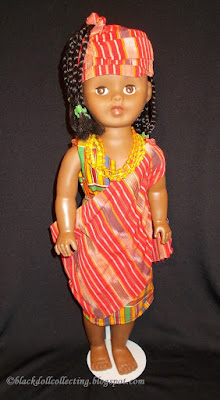 Ashanti Keisha is also from the collection of Third World Dolls.  She is missing her hand-held basket and sandals.  Otherwise, her kente cloth-print dress, multicolored wrap with matching headscarf and yellow and orange bead necklace are original.  She maintains her original hairstyle of multiple braids, which can be seen better in the next image.

An image of three Keisha dolls from The Definitive Guide to Collecting Black Dolls, page 82 is seen next, which includes Makeda Queen of Sheba, purple dress.  Note that the doll in the middle, dressed in school attire is Keisha (as Keisha). 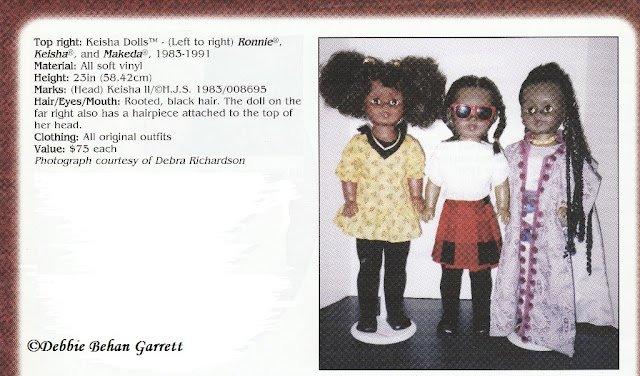 The text below, from Black Dolls an Identification and Value Guide 1820-1991 by Myla Perkins (Collector Books), provides detailed information about the now-defunct Keisha Doll Company:

History of the Keisha Doll Co.
The Keisha Doll Company was established in 1981 by Helen J. Steward.  At that time, Helen Steward was a school teacher in New York.  Out of her love for children and interest in dolls, grew this wonderful doll product that would enrich children while at the same time "put starch in children's backs."  Ms. Steward retired from teaching in 1984 and devoted full time to the development of her doll company in Harlem.  In the beginning, a standard, generic-type doll was used.  Later, she designed her own doll by making the lips and nose slightly fuller for a more ethnic effect.

Keisha offers a wide range of dolls while still definitely being considered an ethnic doll company with emphasis on Third World Dolls.  Although many of the dolls are made from the same mold, it is the costuming that makes every doll unique.  Much research goes into all the clothing and accessory details to insure accuracy of dress.  Braids, pigtails, plaits, and cornrows are a part of our culture and are special features of many of the dolls.

According to Ms. Steward, the name KEISHA was selected because of its popularity among black students.  When teaching in Harlem, each class seemed to have one or more KEISHAs.  After doing business in Harlem, the Keisha Doll Company moved to Florida...

Perkins then lists the names of over 50 Keisha dolls from the company's 1991 and 1992 catalogs. Most of the dolls are female.  There are males dressed as a groom, Shaka Zulu, Toussaint L'Overture, Marcus Garvey, and Frederick Douglass.  Most of the listed dolls were the 23-inch all-vinyl dolls, like my two dolls. Seven of the listed dolls from the '91/'92 catalog were porcelain and five were available in cloth; their sizes were not listed.

In the December 17, 1987, article, "Integration of the Toy Shelves Minority Dolls Making Progress in World of Play" by Jeff Kunerth of the Sentinel staff, Steward is quoted as follows:

''It's a matter of putting something out there that is beautiful that the kids would look up to,'' said Steward. ''The Keisha doll represents to me the black heritage, something to be proud of.''


Steward's Keisha doll comes in four shades of brown. She makes 40 different dolls, some of them based on historical figures such as African queens and kings. Included with the dolls is information about the person's life.

Steward sells about 7,000 of her dolls a year -- not enough to make a profit for a large toy company, but enough to prove to her that there is a market for minority toys and minority toy makers.

Ms. Steward is to be applauded for her doll making endeavor and the creation of so many dolls representing everyday girls as well as historical figures.