Now I Know Her Name


Things happen for a reason.

Recently, Supremeboy23 posted a couple of comments to an old blog post about Yla Eason's Imani dolls (he's a huge fan of the original Imani head sculpt).  His second comment included a link to his Ellisse, Naomi, Imani and Friends Facebook group.  I followed the link and found a link to his eBay auction for the Fashion Corner dolls that I now own. "There she is," I thought, "and now I know her name!"

I believe I first saw the black version of Lucky's 11-1/2-inch fashion doll online in a Limbe Dolls blog post.  That is when I knew I needed to add her to my collection of Barbie competitors.  This was two or three years ago, but without knowing the doll's given name or the manufacturer's name, this was understandably a difficult task to complete.  Prior to seeing Paulette's doll, I might have actually seen the dolls in person at Big Lots, where according to this blogger, they were sold as individual dolls and in themed sets.   Her unique look (I like her facial structure) was not apparent to me when I saw her at Big Lots, so I totally dismissed Zahara, or whatever name she went by then, as a cheap Barbie competitor, and I left her shelved.

With knowledge of the manufacturer's name, I checked my black doll references by Myla Perkins and found two versions in Black Dolls an Identification and Value Guide 1820-1991.  Because the images are in black and white, seeing them in the book during the early 1990s, when I first purchased the book, would not have incited a desire for a fashion doll by Lucky.  Scans from this book are shown next. 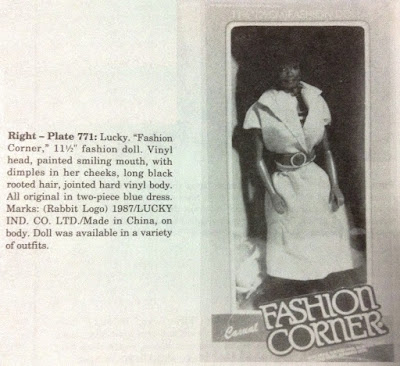 After viewing the completed, unsold doll auction, I went to Facebook (FB) and messaged Supremeboy23, who uses his real name on FB, and expressed my interest in purchasing.  An Imani doll by Olmec (new head sculpt) had been included in the original completed auction along with my two dolls, but I explained to him that I only needed the dolls by Lucky, whose imperfections were described in the auction.   He relisted the dolls at a reduced price in a buy it now and the rest, as they say, is history.

The dolls arrived swiftly, neatly packaged with the blister doll tucked carefully inside Zahara's box where there was plenty of room for her to travel alongside her sister.  See the first photo.

Their Injuries
One has an amputated leg; the other has an amputated arm.  Both will need new bodies, which will be easy to provide since their heads are easily removable.  I also have several thrift store doll finds available as potential body donors.

Even though they are injured, I am very happy to have found not one but two Zaharas*!

Thank you again Supremeboy2 for helping me cross Zahara off my wish list.  Had you not posted a comment on my Olmec dolls post, I would not have found your FB page in the precise amount of time to see your link to the completed auction for my dolls. The events that followed, leading me to now own both dolls, might not have occurred.

*As the caption of the first image notes, the doll in the blister package is referred to as "Clearly Casual," and was not actually named Zahara by the manufacturer.  Until I can think of a better name, she will be called Zahara, too.