Cally Sue, when on her stand is a 27-inch one-of-a-kind, hand-sculpted doll made in 1994 by Terry Stone of Once Upon a Time. 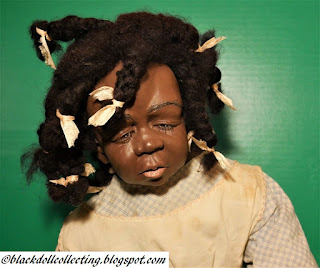 Cally Sue has a very expressive resin-sculpted face.  Appearing to represent a girl from the early 1900s, she seems to have the weight of the world on her shoulders.

Like her head, her shoulder plate, hands, and wrists are also made of resin.  She has a white leather body, poseable cloth arms, cloth legs, and feet.  Her dark brown hair, made of mohair, is styled in several plaits with beige ribbons tied at the ends.   Cally Sue's antique clothes and shoes consist of a blue and white plaid dress, an off-white apron cinched at the waist with lace, off-white silk pantaloons, black tights, and brown leather boots that button on the side.


The 10-inch nude, cloth doll she holds in her right hand is also handmade with painted facial features and hair of mohair styled in two ribbon-adorned side ponytails.


The cloth of the toe of her dolly's right foot is worn from what could have been vigorous doll play (if Cally Sue were a real girl, that is).

Cally Sue arrived from Maryland in early July.  Prior to "living here," she had been part of the eclectic collection of Cheryl Bruce who recently held a doll sale in her home and plans another one this fall.  Cally Sue is one of the two dolls I purchased from Cheryl.

In addition to the flexible wire underneath her clothes that attaches Cally Sue to the dowels, I wrapped an extra piece of yarn around Cally Sue's upper torso and tied this in the back around the upper portion of the dowels to give Cally Sue added support and to somewhat straighten her intentionally stooped-over posture.


The hardest thing for me to accomplish was not securing the dowels to the wooden base and reattaching Cally Sue to the stand.  It was finding a place to display Cally Sue!  She and the base of her stand required more space than I had readily available and I knew this would pose a problem before the purchase.  Like most collectors, however, I am often guilty of buying a doll first and worrying about where it will be displayed later.


It took about a week for me to determine where I would display her and it took almost a full day to remove and relocate several dolls from the top of a bookshelf where Cally Sue was placed as the new focal point of that particular doll display area.

Cally Sue still appears to have the weight of the world on her shoulders, but she has adjusted well to her new environment and I am thrilled to have her here!

Epilogue:  While searching my Facebook doll group for the initial photos that were shared of dolls that would be included in Cheryl's doll sale, I found a post from Cheryl dated November 27, 2014, from her participation in a past Doll-a-Day event.  That post contained two photos, one of which and what Cheryl wrote are shared below:


My Doll of the Day is Cally Sue made by Terry Stone of Boonsboro, MD in 1994. Cally Sue is 27 in. Made of resin with a cloth body. Her stand is made from barn wood. She is dressed in antique clothing and boots and holds her own little cloth dolly as if she is admonishing it. I bought her at The York Doll Show about 3 years ago on a day when I had not planned to spend much money. Of course I tried to walk away and did, but my heart kept calling me back so, of course, she came home with me.

As a comment to Cheryl's original post, I wrote:
I love Cally Sue! Her face is so expressive, and those boots are perfect for her. I wish I could have seen her doll's face.

On that same November 2014 day, Cheryl replied with the following photo:

Thank you for following this blog, for reading the posts, and for your comments. If you are not already a subscriber, go to the homepage. If the right sidebar is not visible, scroll to the bottom and click "desktop view," locate and click "subscribe to posts." Optionally, also subscribe to comments. There is also an email subscription box for those who would like to receive posts by email.

Email ThisBlogThis!Share to TwitterShare to FacebookShare to Pinterest
Labels: clay doll, Once Upon a Time dolls, OOAK one of a kind hand-sculpted doll, Terry Stone