Purchased in April 2007, a year before I began Excel spreadsheet documentation of doll purchases, I introduced Keziah to my Yahoo! doll group with the above photographs and the following text:

Meet Keziah by Carolyn Seybert of San Antonia, Texas. Made of felt with hand-painted eyes in 1987, John 7:37-38 is written on her back below the artist's signature and other identifying marks. 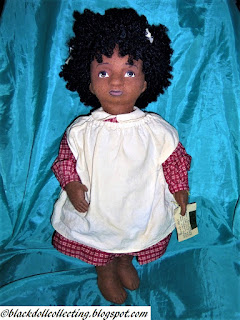 John 7:37-38 King James Version reads:
37 In the last day, that great day of the feast, Jesus stood and cried, saying, If any man thirst, let him come unto me, and drink.
38 He that believeth on me, as the scripture hath said, out of his belly shall flow rivers of living water.

*If the artist's intention was for Keziah to represent a child of the 1860s residing in the American South, she would have been born into slavery and still a slave in 1860, the year before the American Civil War was fought between the North and South over their different views regarding slavery, and three years before the Emancipation Proclamation was signed by Abraham Lincoln on January 1, 1863.  However, if she was a Texas slave, she would spend an extra two and a half years enslaved post-Lincoln's signed proclamation because the abolishment of American slavery was not announced in Texas until June 1865.

**In the Bible, Keziah was the second of the three daughters born to Job after his sufferings.

In my collection, Keziah is a free doll.  I recall after winning the eBay auction attempting to reach out to the artist by phone and by snail mail.  I wanted to gain more information about the doll (what was her inspiration for creating Keziah; what inspired her to name her Keziah?, are just two questions I would have asked).  My attempts were futile.  I would later learn, however, that Keziah has a brother.  A fellow collector owns the boy but she, too, has no more information about the artist than I.

Keziah has been displayed in the doll room, standing unsupported near the mini-blind-covered patio door.  Did the weight of her free-standing body or sun exposure cause what I recently discovered about her?

Approximately three months ago, several areas of Keziah's felt were discovered to be deteriorating.  These areas were worn so thin that the stuffing was visible.  These were in areas of stress such as her wrists where they bend and her ankles from bearing her weight.  I would soon learn that the felt at other areas was worn thin as well.


This was a very disheartening discovery.   I wanted to do something to restore this special-to-me doll that had been part of my collection for 11 years and in the doll world for 31.   I contacted felt doll artist, Karen Oyekanmi, who has made two dolls for me in the past (my Toddler Baby and Kellie).  Karen graciously offered to do the repair.  So, Keziah was shipped nude to her.  Needle felting the weakened areas was done, but Karen discovered this only caused breakdown of the surrounding areas of original felt.  Because the arms and legs were the most affected and vulnerable areas, I asked Karen to make arm cuffs and leggings for Keziah to match the color of her off-white/cream-colored apron.  This was successfully done before the doll was returned to me.

Upon the doll's return, the deterioration of several exposed areas continued.  With even the slightest touch or turn of a limb, the felt continued to break down.  Because I did not like the appearance of the needle felted areas (which looked hairy to me), I decided to paint over these and other weakened areas as illustrated in the next several photos.

Karen later suggested using fabric stiffening spray, which would have probably solved the entire dilemma, but I had already begun painting the involved areas.  She also wondered (before returning the doll to me) if an entirely new body would decrease the doll's value.  A new body was not an option at that time because my goal was to preserve as much of her originality as possible.

In some areas (the soles of her feet, ankles, and upper leg joints) I used white felt to cover the exposed stuffing.  Using acrylic paint, the white felt was painted brown to match the color of the original felt as captured in the next photos.

I managed to piece this dear doll together and purchased a pair of tall faux suede boots to add additional covering and stability to her legs.


I have since purchased the suggested fabric stiffener, but because the leggings and arm cuffs fit snugly, I will only be able to spray her body and her face, which is at this time not affected by the deterioration.  I will delay doing that for now.  In the meantime, Keziah has been redressed (as illustrated in the last photos), placed on a straddle doll stand and will be handled very gingerly from now on.

While she has not endured as much misery and torment as Job, like Job, it is my hope that the last part of Keziah's [doll] life is more blessed than the first and that she will survive at least another 31 years.

dbg
Thank you for following this blog, for reading the posts, and for your comments. If you are not already a subscriber, go to the homepage. If the right sidebar is not visible, scroll to the bottom and click "desktop view," locate and click "subscribe to posts." Optionally, also subscribe to comments. There is also an email subscription box for those who would like to receive posts by email.