Dyeing to be Black Part 1 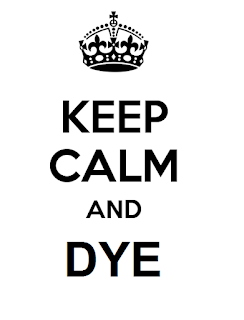 During the first quarter of 2016, after months to years of being a frustrated seeker of Black-Barbie-clone*/competitors, suffering innumerable, disappointing auction losses, many of which ended with bids that soared toward $300 and other amounts I flat-out refuse to pay, I stumbled upon another collector's blog that gave me an "ah ha" moment.

Years ago I attempted to use Rit clothing dye to dye a 1960s Chatty Cathy and Thumbelina, the 30th Anniversary Francie (among others), and immediately discovered the original Rit dye formulation will not penetrate hard plastics.  The dolls' softer vinyl parts dyed beautifully.  Unfortunately, I was left with the tedious task of painting the hard plastic parts to match the parts that did absorb the dye.  Because of this, I never considered dyeing Barbie clones; I knew their heads would absorb the dye, but I also knew I would either have to find bodies to match the heads or paint the bodies.  After stumbling upon the aforementioned blog, where successful colorized dolls resulted using a dye that will penetrate hard plastics, I challenged myself to give it a try.


With this plan, my eBay searches switched from Black Barbie clones to Barbie clones, seeking white dolls to dye instead.  Initially, the goal was to purchase complete dolls, but I noticed several sellers offered Barbie clone heads only.  I immediately found the three heads shown above for prices that ranged from $5 to  $8, a far cry from $300 (even if work would be involved to achieve the desired result).

I could have simply used regular Rit clothing dye on these since the heads are soft vinyl, but this was an experiment, the results of which I had seen and felt I, too, could achieve with the different dye.

During the 1970s, Totsy manufactured both black and white Barbie clones like the one shown above. Several black versions have been offered on eBay that I was unsuccessful at winning.  So in addition to dyeing the Barbie clone heads, I also dyed Twistee Totsy. 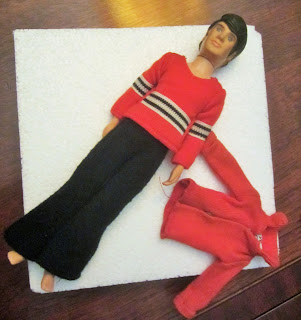 Later in 2016, after I was bitten by the desire to own a never-removed-from-box World of  Love (WOL) Soul, I purchased a box-lot of WOL clothing from a seller, who also had the lone male doll, Adam, at a giveaway price.   I purchased Adam with plans to add him to the doll dyeing project.  Adam is shown above in the photo the seller provided, dressed in what she described as the "most masculine clothing" she had.

Spur of the Moment Candidates


I had not planned to dye the 35th Anniversary Brunette Barbie or the GI Joe Delta guy, but they both took a dip in the dye bath as well.

The project commenced in late January 2017 and was completed in mid-February.  In addition to dyeing the above dolls, two medium brown (1990s coloring) AA Barbie bodies were dyed to use with two of the clone heads. After the dyeing was complete, extra detailing that I did not realize would be required, took place over a several-day period.

I removed Adam and Twistee Totsy's heads.  Then, to ensure all dolls were clean and free of dirt or other foreign materials that would prevent the dye from absorbing evenly, I dipped all heads and bodies into boiled water (all except GI Joe and 35th Anniversary Barbie, since they both took the plunge at the very end after the planned dolls were dyed).  The cleaned dolls were next laid flat on a towel and patted dry.

I used a yoga pad to cover the surface on which the dye bath (aluminum roasting pan) would be placed (a trash bag or large piece of plastic can be used instead).  Next, I boiled enough water to half fill the aluminum pan, poured the dye mixture and enhancer packets into the pan of boiled water, and stirred this using aluminum tongs.

The planned doll heads, Adam's head and body, and Twistee's head and body were placed in the dye bath, swirling each and/or holding each down with the tongs to ensure full and even coverage of the dye.

The gray-looking, floating body in the above photo belongs to Twistee.  Within a few seconds to minutes, two of the clone heads and Adam's head, arms, and legs, immediately turned a very dark brown. One of the clone heads turned a very unnatural, splotchy beige-gray-brown color.  Once the desired or over-desired tones were achieved, the heads and bodies were removed and placed onto an old towel.

Because the dye bath was still hot and useful, I retrieved a couple of thrift store bodies from the doll room and the GI Joe.  These were placed in the bath and left for the seconds to minutes it took for the dye to deepen their dye-able surfaces before being removed. 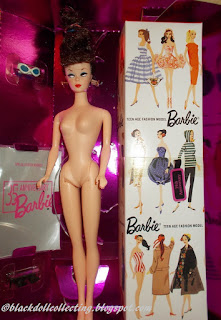 By now the dye bath had cooled, but was still warm enough to use.   I ran to a back room where my two remaining 35th Anniversary Barbies are stored (I had purchased these years ago to resell).  I grabbed one, immediately snapped her picture in the NRFB state, removed her from the box, undressed her, took another photo of her nude before she was dunked into the bath alone, as I hoped for the best.

As mentioned and illustrated, Twistee Totsy's body turned gray.  Her head dyed beautifully, but her light blonde hair refused to darken, turning a dishwater blonde instead. Adam's torso and neck did not absorb much dye.  Interestingly, any painted areas, such as Adam's lips, the dolls' eyes, and GI Joe's shirt, his joints, feet, and his blonde hair did not absorb the dye fully or at all.  35th Anniversary Barbie is now a dark caramel color with a much lighter torso.  At this point I knew my work was not over.

In the next post, a closer look at the results will be shared.

The other blogger's post that inspired this project can be read here.