Who Knew I Would Receive Gifts on Mama's Birthday?

The dolls and doll-related items contained within the above delightfully-decorated shipping box arrived on my mother's birthday.  The timely arrival was purely coincidental yet very much appreciated.

I was so impressed with the artistry on the front and back of the box that it took several minutes for me to open and view the contents.   I gingerly removed the ends of the brown paper wrapping and cut out each image to keep!


As an art enthusiast, who realized someone had taken the time to creatively color the formerly black and white images for me, I was not about to destroy them.  After each image had been cut out and set aside, the package was opened.   Had I known each wrapped gift contained a similar colored image tag along with several others that were used to write a multi-part note of appreciation, I would have still saved the outer artwork.  Yes, I would.

So what was in the package?


Photos of the presents and gift tags, which describe the contents in each package to which it was attached, are shown first, followed by the unwrapped gifts:


In these three packages were a beautifully-made clothespin doll dressed in my favorite color, peach; an ornament created by doll artist, Daisy Carr; and doll jewelry (earrings, pin, and necklace) made by Marie Green.  Individual images of each follow: 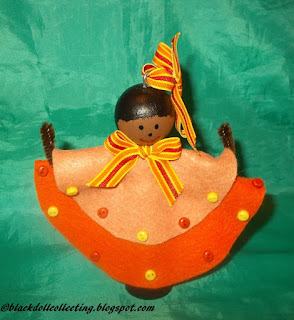 Wait! There were two more gifts.

Words cannot express how deeply honored I felt as I opened these gifts and enjoyed the artwork, some of which I later learned was done by children ages 5 to 10.  To have been thought of in such a manner has left me feeling highly favored.

Thank you so much (she prefers not to have her name mentioned) for my beautiful gifts and their well-thought-out, creative presentation.

*The images that were colored were downloaded from the free coloring pages link at DanaClarkColors.com.