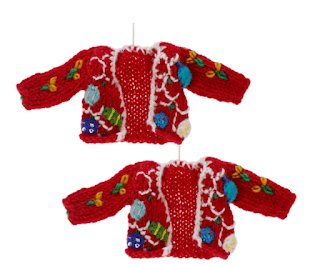 Problem #1:  My package from The Greater Good Animal Rescue that was supposed to contain two sets of two Christmas Lights Ugly Sweater Ornaments, as their website advertised and as shown on the left, was scanned in as delivered at my post office on November 20, 2017. I discovered this after tracking the package on Saturday, November 25th because as of that date, the package had not been placed in my post office box.

This past Monday, November 27th, with tracking info in hand, I visited the post office where they could not locate the package. I asked for and was given their consumer affairs (CA) phone number because this is not the first time I have had issues with this post office.  From home, I called CA and was told that the people at the post office should have taken the time to find the package since it was delivered there. The CA person, a very nice woman, opened a case, gave me the case number, and informed me that someone from the post office would contact me within 48 hours.

Within 48 hours, I did receive a call from a male postal worker who asked if I had actually been to the post office to check my box.  My answer was, "Yes, I was there this past Monday, the 27th.  The package was not in the box.  So I stood at your dutch door, but left there to stand in line at the desk because no one answered the buzzer at the dutch door.  The line clerk briefly looked for the package, returned and told me to go back to the dutch door, that someone would help me there. I did.  After another brief check by another clerk,  I was told the package could not be found but they would continue looking for it.  I asked for the consumer affairs phone number and was given that number, which is when the case was opened, which is also why you are calling me."

The man then said/asked, "Ma'am.  You're not understanding what I asked you.  Have you actually been to the [name of post office] station to check your box?"

I angrily shouted, "NO, IT'S YOU WHO'S NOT UNDERSTANDING.  I JUST TOLD YOU, I WAS THERE ON MONDAY, THE 27th.  I CHECKED MY BOX.  THE PACKAGE WAS NOT IN IT!  I STOOD AT THE DUTCH DOOR, THEN STOOD IN LINE.  YOUR CLERKS CHECKED, BRIEFLY, TOLD ME THE PACKAGE WAS NOT THERE.  I ASKED FOR AND WAS GIVEN THE CONSUMER AFFAIRS PHONE NUMBER!"

Him:  Oh, I'm sorry ma'am. I misunderstood you. Let me check something.  Can you hold on for a minute?

Me:  Yes (with blood pressure and respiration probably elevated).

Him, returning to the phone:  Ma'am, your package is in your box.  When I checked and saw that it was a small parcel, I decided to check something.  When did you say you last checked?

Me:  It is [excited and relieved]???  I was there Monday, but it was NOT in the box on Monday.  It must have been found and placed in the box after the case was opened.  Thank you for checking.

He either found the package when he left the phone to "check on something."  Or, after the case was opened and they were "forced to do their job," the package was found on Monday and placed in the box. 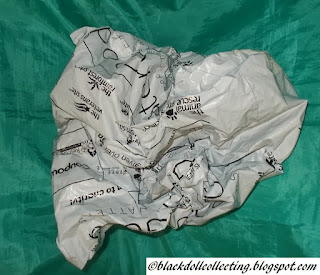 I went to the post office shortly after that call ended and found the plastic mailing envelope in which the ornaments were enclosed.  It was balled up as though it has been shoved into my box, as shown above.  What idiots!

I called the Greater Good's 800 number and informed the customer service associate about the issue.  She apologized and placed another order for two sets.  She indicated there was either a warehouse mix-up or online description mix-up.  Either way, she explained, "You will receive either two more sets of one Christmas sweater ornament and a stocking or what the website describes:  two sets of two Christmas sweater ornaments."  So if anyone ordered these and you, too, received a sweater ornament and a stocking, call them and let them know, their 800 number is on the receipt and can also be found at their website.

While I wait for the other package to arrive and hope the post office places the package (balled up or not) into my box in a timely manner, I chose Tamica to model the Christmas sweater after redressing her in a black halter dress and black heels. 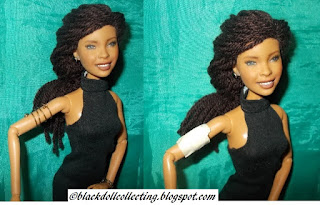 Because Tamica wears a copper arm bracelet that I did not want to remove and also did not want it to snag the sweater, I covered the bracelet with masking tape as illustrated above. 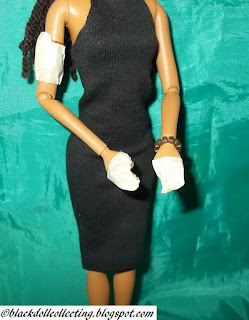 After a few failed attempts to lead Tamica's pointed fingers and hands through the arm holes of the sweater without the fingers catching the threads inside the sleeves, I temporarily covered both hands with masking tape.

Just as I feared, the sleeves of the sweater are not the ideal length for playscale-size dolls.  I tried lengthening the sleeves by pulling on them, which might have added a mere fraction of an inch, but really not enough. 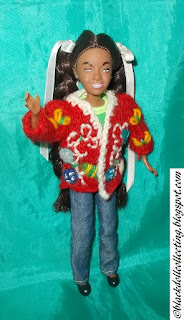 Nine-inch Keyshia (friend of Fashion Madness Kenya) temporarily tried Tamica's sweater on to illustrate the fit.  The sleeve length still appears a bit short on her.

While I was in doll-dressing mode, using more appropriate size buttons, I took April's advice and replaced the over-sized buttons that were on Caleb's flannel shirt (a former Target ornament), shown above.  I could not decide if I wanted to use the same tan color or a darker color.  The decision was easy to make after I viewed both button colors on the shirt.


The original buttons had been hot-glued on.  Before sewing the selected buttons on, I removed most of the glue residue by placing a small piece of cotton fabric on top of the glue areas and ironing over these with a warm iron.  The iron melted the glue enough for most of it to attach to the cotton fabric and peel off when the fabric was lifted. 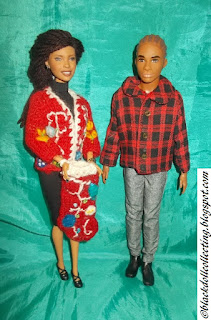 Aunt Tamica poses with her nephew Caleb, whose flannel shirt now has new dark brown buttons.  I did not add buttons to the cuffs as I did not think those were necessary.

Reminder:  If you ordered the Christmas Lights Ugly Sweater Ornaments, expecting to receive two sweaters in a package and received one sweater and a stocking, call The Greater Good Animal Rescue folks and let them know.


dbg
Thank you for reading. Was this post helpful?
Follow my sister blog Ebony-Essence of Dolls in Black
View the Doll Events page for updates. Check out my eBay listings here.
Posted by Black Doll Enthusiast at 12:00 AM