Rosa Parks Barbie and the Remarkable Woman Who Inspired the Doll


To honor Mrs. Parks for her courageous work in the Civil Rights Movement, Mattel has included a doll in her likeness in their Inspiring Women series.

Actual photos of my doll (still in the box) and photos taken by Romona Jennings of her doll posed outside the box are included in this image-intense post.


"Each person must live their life as a model for others." – Rosa Parks

Barbie® recognizes all female role models.  The Inspiring Women Series™ pays tribute to incredible heroines of their time; courageous women who took risks, changed rules, and paved the way for generations of girls to dream bigger than ever before.

Rosa Louise Parks led an ordinary life as a seamstress until an extraordinary moment on December 1, 1955.  When she refused an order to give up her seat to a white passenger and move to the back of the bus, Mrs. Parks' act of defiance became the catalyst for the Montgomery Bus Boycott.  Rosa Parks' quiet strength played a notable role in the civil rights movement, but it would still take another nine years and more struggles before the 1964 Civil Rights Act overruled existing [segregations] laws.  Hailed as "the Mother of the Modern Civil Rights Movement," Rosa Parks earned worldwide recognition and numerous awards including the prestigious Presidential Medal of Freedom and Congressional Gold Medal of Honor.

Girls need more role models like Rosa Parks, because imagining they can be anything is just the beginning.  Actually seeing that they can makes all the difference.


Ms. Jennings graciously shared the following photos of her deboxed Rosa Parks Barbie and answered my questions regarding the quality of the doll's clothing.


In these next photos, Romona has created several backdrops that recount the 1955 Montgomery, Alabama bus incident and the events that followed. 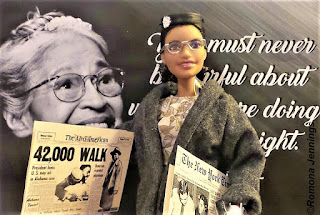 There are buy pages for the Rosa Parks Barbie at the Barbie/Mattel website and Walmart where the dolls are "flying off the Internet shelves" as quickly as ordering is made available.  This is proof that dolls like this are very much desired when they adequately portray the people they represent.  With the exception of a few complaints from folks that Mattel's description on the back of the doll's box lacks completeness, doll collectors seem to overall appreciate Mattel's efforts in the production of this doll.  No one else has mass-produced a doll in Mrs. Park's honor.

For those who desire more information about Mrs. Parks beyond what Mattel provided on the back of the box, I have added the following additional details about her remarkable life which is followed by a video.

Birth: Rosa Louise McCauley Parks was born on February 4, 1913, in Tuskegee, Alabama.
Education:  At age 16, she left high school in grade 11 to care for her grandmother and later for her ailing mother.  She went back and completed high school in 1933 and attended Alabama State College.
Marriage:  In 1932, she married Raymond Parks, who was a barber and also a civil rights activist.  It was Mr. Parks who encouraged her to complete her high school education.
Employment:  Mrs. Parks "worked as a clerk, an insurance salesperson, and a tailor's assistant at a department store.  She was also employed at the time [of her arrest on December 1, 1955] as a part-time seamstress by Virginia and Clifford Durr, two white residents of Montgomery who were staunch supporters of the black freedom struggle." [1]  After moving to Detroit in 1957, she worked as a seamstress.  From 1965 through 1988 she was an administrative assistant for Congressman John Conyers.
Civil Rights Involvement:  Mrs. Parks' involvement in the struggle for civil rights began as early as the 1930s.  She and her husband supported the Scottsboro Boys (nine black teenagers falsely accused of raping two white women on a train in Scottsboro, Alabama in 1931).  Additionally, she joined the Montgomery NAACP in 1943, worked as a youth advisor, served as NAACP secretary from 1943 to 1956, and "helped operate the joint office of the NAACP and the Brotherhood of Sleeping Car Porters." [2]  She also worked with the Montgomery Voter's League to increase voter registration amongst blacks.  While living in Detroit, she was a member of the Southern Christian Leadership Conference (SCLC) and she participated in numerous marches and rallies including the 1965 March from Selma to Montgomery as part of a voting rights campaign for blacks.  A lifelong activist, in the mid-1980s "she was a supporter of the free South Africa movement and walked the picket lines in Washington, D.C., with other antiapartheid activists." [3]
Awards:  "Parks, an international symbol of African-American strength, has been given numerous awards and distinctions, including ten honorary degrees.  In 1979, she was awarded the NAACP's prestigious Spingarn Medal.  In 1980, she was chosen by Ebony [magazine] readers as the living black woman who had done the most to advance the cause of black America.  In the same year, she was awarded the Martin Luther King, Jr., Nonviolent Peace Prize by the Martin Luther King, Jr., Center for Nonviolent Social Change.  In addition, the SCLC has honored her by sponsoring the annual Rosa Parks Freedom Award."[4]   On what would have been her 100th birthday, on February 4, 2013, Rosa Parks was honored with a U. S. Postage Forever Stamp.

Mrs. Parks speaks in the short video below.

In her own words, Mrs. Parks described the Montgomery bus incident as follows,

"I was quite tired after spending a full day working.  The section of the bus where I was sitting was what we called the colored section.  Just as soon as enough white passengers got on the bus to take what we consider their seats and then a few over, that meant that we would have to move back for them even though there was no room to move back.  It was an imposition as far as I was concerned."[5]